In my last column, I discussed how to create linkbait by writing about other people. Shari Thurow made a comment that fits in perfectly with an idea I had about finding ways to expand existing content and better market the byproducts of your business: “Instead of linking to the link-bait article, I’ll write my own POV […]

In my last column, I discussed how to create linkbait by writing about other people. Shari Thurow made a comment that fits in perfectly with an idea I had about finding ways to expand existing content and better market the byproducts of your business:

“Instead of linking to the link-bait article, I’ll write my own POV (point of view) in the proper context and promote it elsewhere.”

Shari’s idea was to respond further to interviews by writing more on her own site. This allows you to clarify any statements you made that were possibly taken out of context or misquoted, for example. But, I think we can use that idea for much more.

Businesses make use of byproducts all the time. Furniture companies resell their waste sawdust, for example, and we heated our house this winter using “bricks” made from that exact type of substance. There was even a fantastic article recently about a civil engineering professor who has found a way to create an asphalt binder substitute using pig waste.

What both of these examples have in common is that they are marketing a physical byproduct; so, it’s a natural step to market content byproducts.

When you contribute to or create content, you automatically have several “byproducts” available to you. With interviews published on someone’s else’s site, for example, you can expand your answers to questions, you can clarify statements you made or write about how your opinion has changed since that interview was published, and you can discuss topics that weren’t covered but could have been.

You can do the same with crowdsourced pieces; and with those, you have the added bonus of being able to further plump up someone else’s responses. If you’ve contributed to 5 crowdsourced pieces, I bet you could find 10 instances where you disagreed with the answers provided by other people — and you could probably find at least that many new ideas that you could write about on your own site. As I’ve done here, you can even read the comments written on your other content to generate ideas for a new post.

How Birchbox Does It

Birchbox is a company that sells beauty and lifestyle products. Their big draw is a monthly sample box that lets you try small versions of items they sell so that you’ll (hopefully) decide to buy the full-size versions. They give you points when you do, and those points add up to discounts.

They have what I’ll call a very “Papa John’s sense of timing.” Papa John’s email offers magically appear in my inbox just when I really, really need them. Birchbox emails seem to appear when I am wondering what on earth to give as a gift, for example. Recently, they sent an email that fits right into the idea of this article: 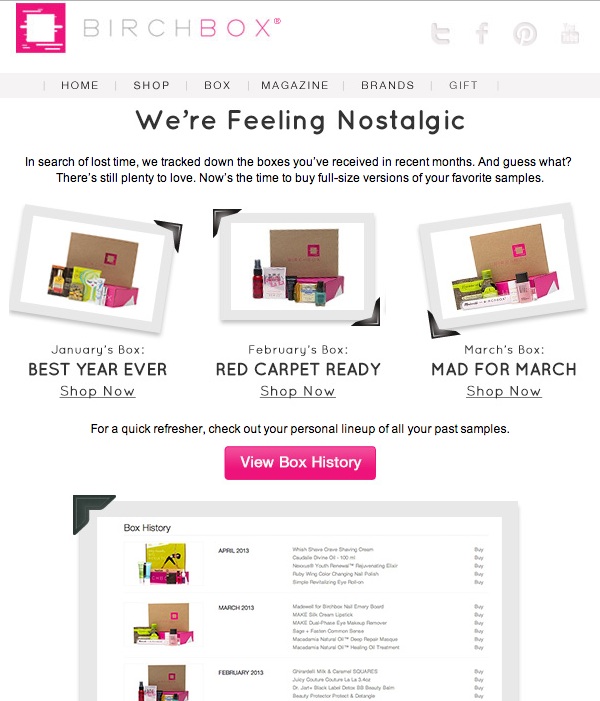 They’re reminding me of what I purchased and making it easy to buy something else now, and they’re doing it in a way that doesn’t annoy me (like many companies’ emails do) but instead makes me want to make a purchase right now. They’re saying, “Here’s what you have. Would you like more of it or maybe something additional?” That’s the whole idea of expanding your content, really. Here’s what I have — here’s what I could have.

They also produce more content about their products, in various forms. They send information in their monthly sample boxes, printed out on a postcard. They send the email to say that your box is on its way. They produce articles in an online magazine each month, and they produce monthly videos about their products. They’ve taken a few items that have been purchased and created loads of unique content about them, all of which fits together fairly seamlessly. They promote it all on social media, too. They’ve really got it nailed, in my opinion.

Most of us already have something that can be expanded. If you don’t, then focus on how you can expand it when you create the next piece. Can it be updated? Can it trigger other ideas? Can it be added to it another format like video or a newsletter, and can be it promoted socially?

Now, that’s pretty easy in our industry, as many of us are writing and being written about. But what if you’re a business that doesn’t create much content, whether directly or indirectly?

To start, think locally. What local knowledge do you possess? For example, most people outside your area won’t know things like where the best free parking, lunch spots, and quick places to grab coffee are.

Maybe your office is smack dab in the middle of the same area where the local government offices for your county are. Being there every day, you know exactly how to get a great lunch and get back to work within 45 minutes. Whether you realize it or not, this is valuable information.

Think about a lady from out of town who’s just moved back to the area after being gone for 30 years. For whatever reason, she needs a copy of her birth certificate, but she doesn’t have much time to drive to the courthouse and fight the downtown crowds, and she has to do it on her lunch break. If she found information on your site about best free places to park that get you close to the courthouse, that would be helpful. If that same piece also linked to or included information about the awesome hot dog stand on the corner — that happens to give away free water bottles if you buy 2 hot dogs — then that’s even better.

You sell surveying equipment. She probably isn’t going to buy that, and she may never link to you or promote you on social media; but, she may live next door to someone who works for a big housing developer, and she may start raving about those fantastic hot dogs and she’ll say that she found some good information about parking on your survey equipment site. He takes interest and you might just get a new contract. I will admit that is an outlandish example, but sometimes thinking like that will give you interesting ideas.

You may not think you have much to write about, but a forum where customers ask questions could be helpful. Looking at Q&A sites like Quora might be useful in giving you some ideas about what your target market wants to know about. Just because you can’t think of something to create doesn’t mean that your audience can’t. If you have a social media presence and are struggling, then ask.

And If Your Industry Is “Too Boring?”

I realize that there are some industries where creating content seems like too tall an order. However, people do have questions and they need answers, no matter how boring you think your industry is.

I had a recent conversation with a potential client who absolutely refused to believe that we could generate ideas for content for his site because he thought it was impossible. His industry was too boring. People looking for his offerings didn’t want to read content; they wanted to go straight to the product and get it.

I understand that he may be right in many ways, but it’s silly to ignore the fact that creating new content that can be promoted on social media can give you more visibility online. It doesn’t have to be an article, certainly. Maybe you sell outside dog kennels and you create a video series showcasing people who use your kennels for everything from chicken runs to a garden protected from deer and rabbits.

Maybe you’re a pest control guy and you tweet terrifying facts about giant cockroaches. Maybe (and I can barely type this without shuddering) you post a photo gallery of the biggest spiders you’ve personally encountered. SSI World sells shredding equipment and has a page listing everything from diapers to aluminum siding being shredded. Who would have thought industrial shredders were that fascinating??