Ask.com announced that they will be launching "AskEraser" in the near future, a feature to allow you to erase your search history. Ask also said it will be implementing a new 18 month data retention policy, where searches will be disassociated from IP addresses or cookies that might possibly be used to link them back […]

Ask.com announced that they will be launching "AskEraser" in the near future,
a feature to allow you to erase your search history. Ask also said it will be
implementing a new 18 month data retention policy, where searches will be
disassociated from IP addresses or cookies that might possibly be used to link
them back to searchers.

"AskEraser is a great solution for those looking for an additional level of
privacy when they search online," said Jim Lanzone, CEO of Ask.com, in a
press
release on the news. "Anonymous user data can be very useful to enhance
search products for all users, and we’re committed to being open and transparent
about how such information is used. But we also understand that there are some
who are interested in new tools that will help protect their privacy further,
and we will give them that control on Ask.com."

Searchers using the service will not have their searches logged, plus they’ll
be shown a reminder that this privacy feature is enabled any time they do a
search. The feature is expected to be launch later this year in the US & UK,
then globally next year.

Postscript From Danny: Barry Schwartz, Greg Sterling and I have now
gotten off a call with Ask about the announcement. Here’s a rundown on some of
the technical and other issues relating to Ask Eraser.

The press release says that records will be destroyed "at the time of the
search," for those that opt-in. How exactly will that be done? Ask is still
figuring it out.

"One of the reasons we’re announcing that we’re going to do it but haven’t
done it is that we’re still working out the technical implementation," said Doug
Leeds, head of development at Ask.com.

Doing it is somewhat tricky. You’ll need to identify the person as someone
who has enrolled in AskEraser, which will almost certainly be done by looking at
their cookie. There’s a degree of irony — to be anonymous in searching at Ask,
you’ll have to identify yourself via a cookie!

Still, a cookie is fairly anonymous. Those flagged as using AskEraser then
have to have their information removed from two different databases: web server
logs as well as Ask’s search logs.

Let’s take search logs first. Ask keeps a record of all queries, so that it
can tell what’s trending, serve up ads and do many other things based on what
people are searching for. Keeping someone who uses AskEraser out of these search
logs should be fairly straightforward. If you see a cookie, you’d immediately
delete or not pass along the search.

Web server logs are harder. When you search at a major search engine, what
you searched for is embedded in the URL of the new "page" that you request, like
this:

See the word "cars" in bold? That’s part of your page request, which is
logged as something the web server has handed out. To kill that at the time of
search, Ask would need to immediately go into the server logs and anonymize the
IP record or delete the search terms. Both are harder, since web server logs are
constantly being written to on a busy site like Ask.

Instead, it’s likely that Ask would have to do this change not "at the time
of the search" but sometime soon after. I asked if we were talking about "within
minutes, days, weeks but not months," and Leeds agreed with that. "Not months,"
he said.

By the way, Google
Anonymizing Search Records To Protect Privacy explains both how Google got
the ball moving for greater search privacy among the major search engines by
announcing back in March that it would anonymize log data after 24 months. That
article also goes into depth about how web server logs can record what you
search for. This week, Google also
announced that its
cookies would expire after two years, by far the shortest expiration period of
any major search engine.

Greg asked why Ask should retain any information at all, and Leeds explained
similar to things

Google has said that the information is helpful for various reasons, such as
improving relevancy and doing click auditing.

Why 18 months for data retention? Leeds said Ask felt that was the right
amount of time to have enough recent data for Ask’s own needs while protecting
users privacy. Plus, he stressed (quite correctly) that anyone concerned this is
too long will be able to kill their data much sooner by using AskEraser.

Of course, 18 months is what Google recently agreed to (see
Google Responds To EU:
Cutting Raw Log Retention Time; Reconsidering Cookie Expiration) after
backing away from its initial 24 months maximum retention policy. Surely Ask had
to figure going with 18 months would keep it out of trouble at least in the EU,
assuming the EU ever got around to being concerned with Ask (the EU initially
targeted Google, then
belatedly realized that since Google was doing a better job on killing log
data than Yahoo and Microsoft, those two
should get a look at as
well).

"We were not blind to the fact that 18 months is the best standard that’s
been put out there already," Leeds said.

It’s important to note that right now, the 18 month policy will only apply to
data gathered going forward from when AskEraser is launched. Leeds said it’s
"definitely our commitment" to go back and anonymize older log data (as Google
intends to do), but again, technical issues still need to be worked out (the
same is also true at Google, where technically, I don’t believe they have a
solution yet in place).

"This has clearly become a very important issue for a few people, and we
think there can be a real solution for that with controls given to people,"
Leeds said. "We realize we can really be a leader here."

Finally, Ask has a
MyStuff service that allows those who opt-in to have their searches recorded
in yet a third location separate from web logs and search logs. AskEraser and
the new 18-month data retention policy is extremely unlikely to apply to
MyStuff, Leeds said. That makes sense — if you opt-in to have stuff saved, you
probably don’t want it automatically destroyed.

Instead, if you use that service, you’ll need to manually disable it as shown
below: 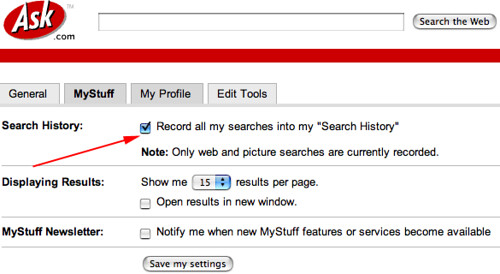 In addition to that,
this
page explains how to erase any stored history.