It’s the 20th anniversary of the fall of the Berlin Wall. Where’s the special Google logo for that, some have wondered. There is one, but only at Google Germany. Elsewhere, it’s apparently more important to keep celebrating the 40th anniversary of Sesame Street. The Google Germany logo is shown above. At Google’s main Google.com site […]

It’s the 20th anniversary of the fall of the Berlin Wall. Where’s the special Google logo for that, some have wondered. There is one, but only at Google Germany. Elsewhere, it’s apparently more important to keep celebrating the 40th anniversary of Sesame Street.

The Google Germany logo is shown above. At Google’s main Google.com site (which serves the US), it’s Count von Count from Sesame Street:

You’ll also see Count von Count in places like Google France and Google UK but not at Google Russia (it gets neither Sesame Street nor a Berlin Wall logo). All three countries, along with the US, had post WW-II “sectors” of control over Berlin.

I’ve actually been working on a piece about how Google determines when to run logos and for what topics. That’s not ready to go out yet, but suffice to say, there’s not a lot of rhyme or reason to it. Sometimes, the company stumbles into offending someone. A national holiday gets overlooked or not marked each year, for example.

In this case, I think it’s fair to say that while the Sesame Street logos were creative and fun, the seven day saga was probably overkill — and someone should have been checking dates for conflicts with other important events.

By the way, Bing has the same oversight. Its US home page features a Tyrannosaurus Rex fossil, as does Bing France. Bing UK has a picture from what’s apparently a viewing gallery inside the German parliament building: 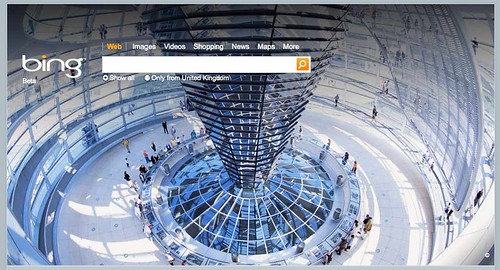 Bing Germany goes with a classic East German Trabant car, set in front of the Brandenburg Gate, which used to be surrounded by the Berlin Wall and was a focal point for celebrations when it fell: 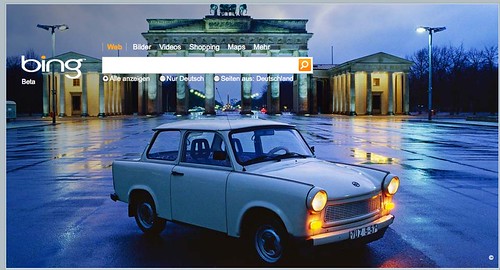 Over at Ask, the US site has a big picture of people in front of the wall:

The UK site has Ask Jeeves (yes, Jeeves is back there) wearing a Remembrance Day poppy (these are commonly worn in the lead-up to the actual day to remember those fallen during wars, which is on November 11): 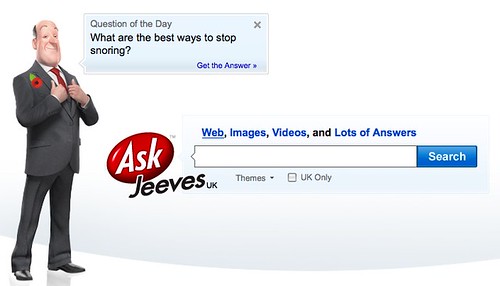 The Ask Germany site has nothing. And speaking of nothing, that’s what you get at Yahoo, either at the main Yahoo.com site, in the UK or Yahoo Germany.