New charts make it possible to see and analyze data in seconds rather than hours. The new AdWords UI is slowly starting to roll out to accounts, with a smattering of users having access. I’ve been able to spend some time there with a small account. Getting used to the new interface is an adjustment, and not all of the functionality works yet, but there the new design is heavy on data visuals that will help cut down on reporting and analysis time.

Here are the data visualizations that have caught my attention.

The Day & hour card is my favorite addition to the new AdWords UI so far — and in all accounts for three of my selections here. The charts in this card turn what’s always been a complete pain into a delightful breeze. The Day & Hour card is located on the main Overview dashboard as well as the Overviews for each campaign and ad group.

In each of three views — Day, Day & Hour, Hour — there is a dropdown menu to select a metric. In the example below, I’ve selected conversions and can immediately see Friday is this account’s biggest conversion day, while Tuesday is the weakest. What currently takes a lot of time to discover after data exports and pivot tables is now immediately visible. 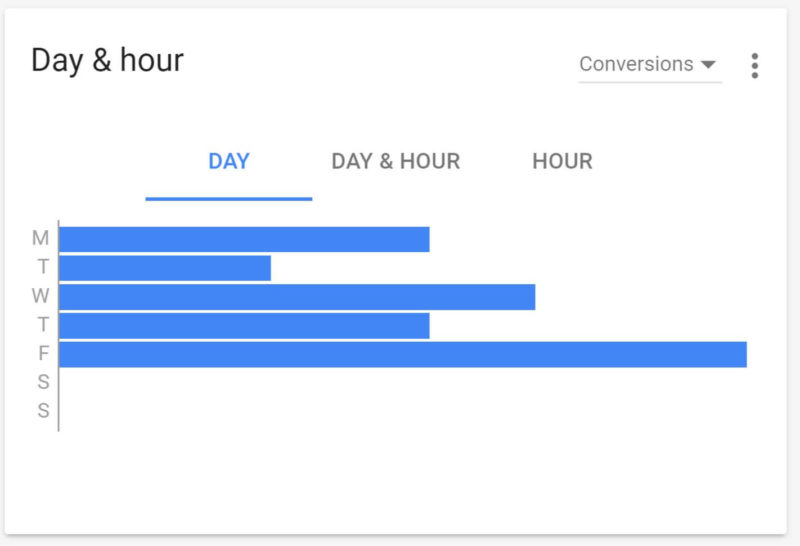 Below is the hour view. I’ve selected Conversions as the metric here, too. With this one chart, it takes about 2 seconds of analysis to see that there are two main periods of conversion activity: morning and mid-afternoon. (It would be even more exciting if it were possible to select a specific conversion type, but that may come eventually.) 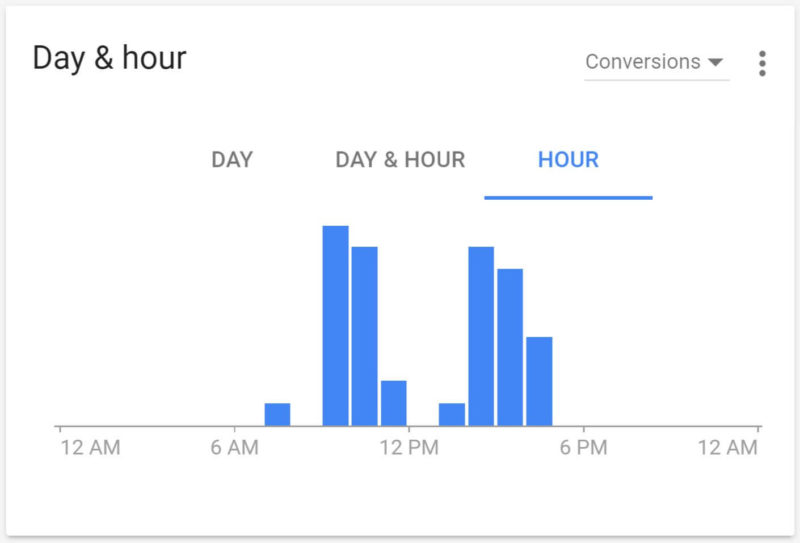 The final visual here, the combination of Day & Hour data, is particularly useful after looking at the individual Day and Hour views (I think Day & Hour should be the third view for this reason). Now you can see how those time blocks play out across the week. In this case, conversion activity tends to be highest between 9 – 11 AM and 2-4 PM, and Friday is particularly strong in the beginning of the work day and late afternoon. I haven’t shown it here, but hovering over each block shows the hour depicted and the number of conversions that occurred during that time. Next I could look at Search Impression Share by day and hour to see how well those high conversion times are covered. Now there’s a starting point for bid optimization that took moments not hours to arrive at. The Devices card is one that has been shown in the early screenshots from Google, so you’ve likely seen it. Device reporting is another area that’s been hard to see from a bird’s eye view. Segmenting multiple campaigns by device is really only useful after exporting and converting the data into a pivot table (and, for whatever reason, Device is not included among the Dimensions reports).

The new UI makes it easy to see how your account and campaigns are performing across devices for three metrics at one time. Below you can see all the metrics options currently available. At the campaign-level Overview, the Devices card also includes notes about device bid adjustments (this campaign has mobile phones set to -20 percent, for example). Clicking on the bid adjustment note takes you straight to the devices screen where you can make bid adjustment changes. Presumably the note will include modifiers for all devices when device bidding is enabled in the account and new interface. Campaign-level view of the Devices card has the option to compare three metrics and includes notes about bid adjustments.

Moving beyond the Overview, there are handy visualizations built in throughout the UI. One area where the visualization has been improved is Ad scheduling. Currently, on the ad schedule tab of a campaign there is a bar chart showing when ads are running and a separate line graph for seeing performance metrics, but no dayparting. In the new UI, there is one chart depicting the ad schedule and metrics broken down by day. Conversions aren’t a metric option yet, but that will likely come.

Now you can see performance metrics by day in the Ad schedule screen.

I admit, this isn’t a visualization per se, but building multi-faceted filters in the new UI is pretty slick. Just click the filter icon and start adding criteria. There’s no big chunk of real estate taken up by the filter interface anymore, and it’s easy to keep adding filters. At this point, the Save filter functionality is not active, but I assume it’s coming. (If not, I’ll take back anything nice I’ve said about filtering.)

Adding filters is simple, and its easier to see what filters you added.

As the new UI evolves and more elements and data are ported in from the current interface — conversion data isn’t accessible in all of the cards, for example — other visualizations will become more useful, but from what’s available now these are the features I’m most excited about.