The death of actress Brittany Murphy is probably the first test for Google’s new real time search results. Earlier this year, when Michael Jackson died, it took several minutes for the news to make it into Google despite the extraordinary number of searches it was getting. The integration of real time results was designed in […]

The death of actress Brittany Murphy is probably the first test for Google’s new real time search results. Earlier this year, when Michael Jackson died, it took several minutes for the news to make it into Google despite the extraordinary number of searches it was getting. The integration of real time results was designed in part to ensure Google wasn’t falling behind on news until traditional news outlets could file.

When I looked about 1/2 hour after the first reports came out, Google had plenty of traditional news results. That’s pretty normal, so it’s hard for me to tell what happened in the first minute after the news appeared. Was Google lacking news results? Did the real time results make up for this? I can’t say.

How about the real time results themselves? How are they adding to the quality of Google’s listings. They are appearing in a unit midway down the page: 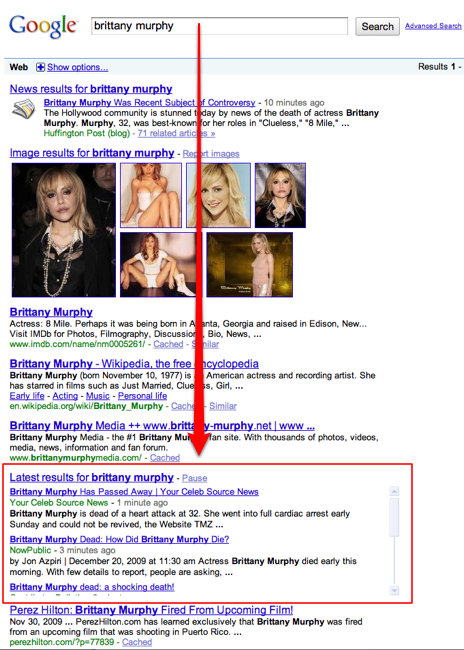 Well, you certainly get a flavor of reaction from people, right within the results:

There were also plenty of news reports mixed in among the reactions. But I had a sense of deja vu. I watched a report from 9News appear:

Then about five minutes later, the same URL was back:

What’s up with that? Was Google just recycling the same stuff? Or was it being pinged by the same page again either on purpose or inadvertently, causing it to reappear?

Some results were just plain stupid to be showing up in the top results on Google, real-time or regardless. Consider this:

Really, I need to see a new profile page at Yahoo Answers for “Brittany Murphy Is Dead Q&A” showing up? There’s no information there: 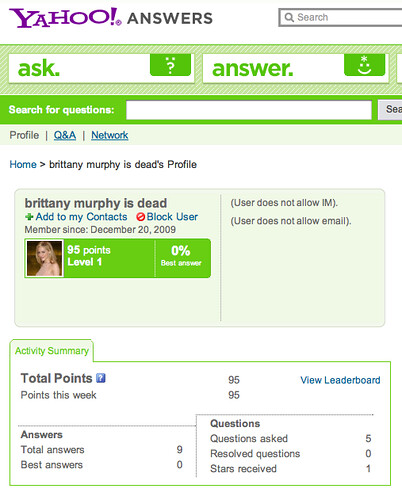 Maybe that page will develop into something substantial down the line. But including it into Google’s top results simply because it recently announced to the world that it exists isn’t that helpful.

Google’s real time results were also wildly out of sync with the results you’d get on Twitter. Consider:

In that screenshot, Google’s most recent “real time” result is 2 minutes old, shown on the left. Meanwhile, in the few seconds it took me to make the screenshot, 700 more results had flowed into Twitter on the right.

In fact, I found that Google’s real time results often simply stopped scrolling for minutes at a time. To get them to restart, I’d have to reload the page.

Other weird things. Consider this result:

See the second story, as 6 minutes old? Why is there a gap between the first results at 1 minute and the second a 6 minutes? That’s not very “real time.”

Part of this is probably down to Google’s filtering. The search engine is trying to prevent spam from getting through. See Google Launches Real Time Search for more on how Google ranks real time results.

I have to say, I didn’t spot any misleading URLs or other obvious spam getting through at Google — or Twitter, for that matter.

Overall, I found myself wishing that there was more relevancy to the real time results (as with Google News, where the default is to show the most relevant things, though these are still fairly recent things). Rather than flowing me random news reports that often just repeated the TMZ report, why not show me that an substantial new news reports?

As for tweets, I was working with my friend Greg Hernandez before writing this, who was doing coverage of Murphy’s death for his Hollywood blog, Greg In Hollywood. We were working to compile a list of celebrity tweets from people that knew Murphy or who had worked with her. Did Ashton Kutcher, for example, who formerly worked with her and dated her, have thoughts?

Google’s real time search was useless for this. Rather than showing what were the most retweeted tweets, it’s just a mishmash of whatever was recent. To find celebrity tweets, we turned to Listorious, which had lists of celebrities as compiled by Mashable, Bloggers Blog and the LA Times.

Kutcher’s tweet about Murphy was easily spotted that way. Not so at Google. At best, eventually a news report came along about it:

It was no better over at Bing’s Twitter Search, by the way. Rather than the most authoritative or most retweeted tweets showing, it’s really first in, first wins — which doesn’t necessarily mean the user wins.

Finally, Google Suggest — the feature that suggests words for people to search on as they start typing — was very current with Murphy suggestions: 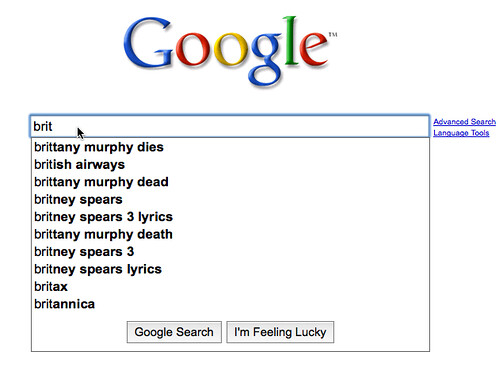 The feature recently came under fire for not being so current in relation the Climategate story.

Postscript: A few people have found this to be a cynical or disrespectful post. I’ll comment further about this.

Could you not show a bit of humanity and pretend to care about someone dying over a rush to get a blog post out?

There’s some irony about accused of disrespect by someone who tweeted about wanting to shoot Miley Cyrus through the head. More irony too when Mark Ramskill tweeted:

A totally cynical and disrespectful use of a poor dead girl for your own self-promotion. Shame on you

Despite Ramskill being happy to retweet a joke about Michael Jackson decomposing and a Thriller comeback.

First, this post wasn’t rushed out. It took me about an hour to compile. If the intent was simply to seek out traffic for those searching for Brittany Murphy, there’s a far easier way for me to have done that. I’d have just hopped over to Google Trends, done a screenshot, listed a bunch of top terms related to Murphy and ensured some of them were in the title of my post. You know, something like: “Brittany Murphy Cardiac Arrest, Drug Use Top Google Trends.”

That’s being cynical, folks. That’s just trying to cash in on traffic regardless of any solid editorial reason to write about something. That’s not what I did, which sure as hell would have consumed less of my Sunday off and generated far more traffic than this piece did.

Indeed, tapping into traffic for a celebrity isn’t that helpful for a search site. We generate more page views, but the visitors who come aren’t particularly interested in most of our search marketing ads.

So why write about Murphy? Because as I said in my lead, this was an important test of how Google’s real time search reacted. Remember, we’ve had concerns that people will abuse real time search results with spam (see Search & Real Time Madness, Google Enables Real Time Spam and The anatomy of a deceptive Tweet spamming Google Real-Time Search). We’ve also seen recently how malware sites tapped into popular search topics (see Guess What? Google Doodles Drive Tons Of Queries & Spammers Know It).

Murphy’s death is a tragedy. She was a popular actress, and I was as saddened as anyone to hear about it. My reaction, as I suspect for many, was “Oh, no” and disbelief.

And yet, I still cover news from a search angle. How Google handled this first major celebrity death in the wake of rolling out real time search results was important to cover, I felt. We know from Michael Jackson’s death of the huge interest these type of events generate in terms of search. How did Google do? And to measure that, unfortunately you do have to actually write about it as it is happening, when you can see the actual results, not days later.

I’ll leave with this perspective. The attacks on 9/11 were a huge tragedy that left me stunned, as they did to people around the world. That day, I watched as search engines largely failed to provide information. I watched as, despite the World Trade Center being destroyed, Google still had listings like “See the view at the top of the World Trade Center.” And I wrote what I found, because I felt it was important that be recorded, not because I had a cynical or disrespectful view of what happened.

Any story about any tragedy is open to accusations of trying to cash in on that tragedy. Some of that is unavoidable. I can only hope that the substantial content in this story speaks for itself.

CMS integration and 2 other new Google tag feature updates
19 advanced Google search operators you need to know
What is semantic search: A deep dive into entity-based search
10 biggest announcements from Google Search On 22
The biggest mystery of Google’s algorithm: Everything ever said about clicks, CTR and bounce rate