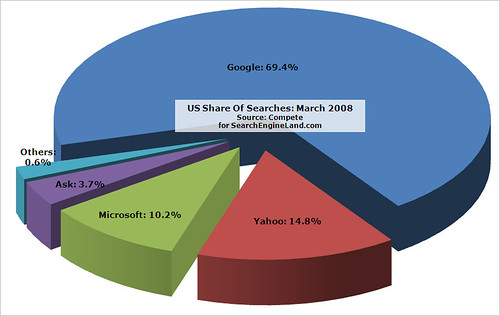 Having covered
Hitwise stats yesterday, today I move on to the

latest stats from Compete on search engine share in
the United States for March 2008. Unlike Hitwise, they show Google taking a very
slight dip last month, with Microsoft getting a slight rise. But while Google’s
percentage share dropped, on a number of searches basis it hit a new high.

The four major search engines stack up as follows:

POSTSCRIPT:Compete counted searches in March from Club Live that it thought it was filtering out, which inflated the Microsoft figures. I’m not going to redo all the charts due to the time involved. Future charts will reflect the new figures. Microsoft had a 8.5% share for March, rather than 10.2%. See Microsoft Dips In Compete’s Revised March 08 Search Figures for more.

The trend over time? Here’s the past year’s worth of data: 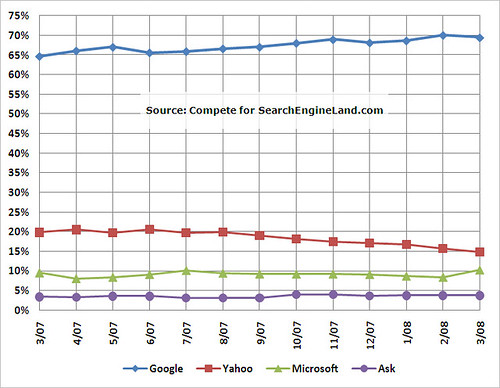 Google’s previous high (according to stats I have going back to August 2006)
was in April 2007, with a 65.3 percent share. Microsoft and Yahoo, in contrast,
hit an all time low for the same period.

The trend (I don’t have data for the missing month): 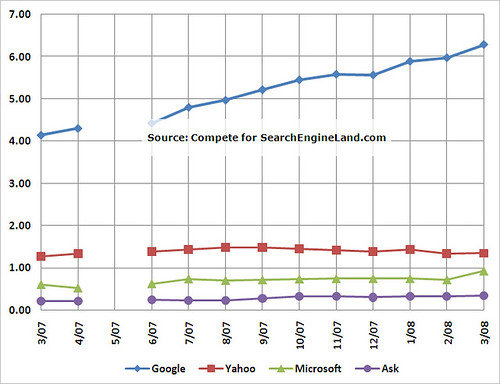 As you can see, despite the slight Google dip on a percentage share basis,
the number of searches at Google actually rose. And Yahoo, which had a drop,
barely saw a drop in searches when you consider it on a number basis. As the
caveats explain more below, the overall pie got bigger, with Microsoft getting a
larger slice, but Google and Yahoo still had plenty to eat.