Compete makes it a quadfecta! No real surprise, the latest search engine share stats out from Compete show Google has hit a new high — just as did previous stats out this month from Hitwise, Nielsen and comScore. Plus, an interesting look at how much search traffic Microsoft’s Live Search Club generates. NOTE: ON THE […] 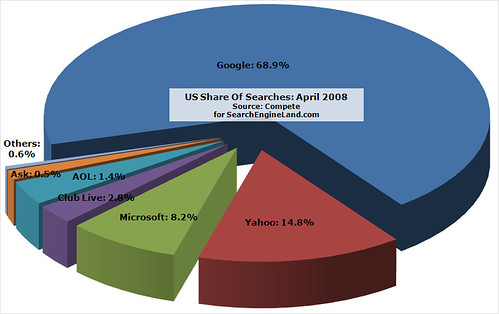 out from Compete show Google has hit a new high — just as did previous
stats out this month from
Hitwise,
Nielsen and
comScore. Plus, an
interesting look at how much search traffic Microsoft’s Live Search Club
generates.

NOTE: ON THE PIE CHART ABOVE, AOL’S LABEL IS SHOWN OVER THE "ASK" SLICE AND THE ASK FIGURE SHOULD BE 3.5%.
THE PIE SLICE PROPORTIONS THEMSELVES ARE CORRECT. SORRY I DON’T HAVE TIME TO FIX
THE LABELS NOW!

Whoa! What’s Live Search Club?
Microsoft On Search
Gains & Live Search Club covers this program that allows people to win
prizes for searching and how it spiked up Microsoft’s traffic after it was
launched — plus the debate over whether these are "real" searches. That debate
caused Compete to exclude them from its monthly figures.

Now Compete has added them back in and broken them out, so everyone can see
how much they contribute. I’ll be revisiting this more in the future. But first, let’s look at
the trend over time. Here’s the past year’s worth of data: 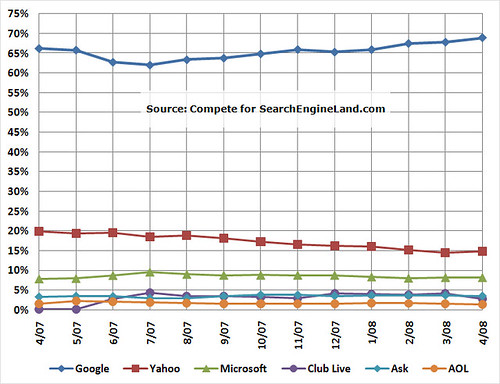 Google, as said, hits a new high. Yahoo sees a slight rise for the first time
in months. Microsoft remains pretty much flat.

Now look at this: 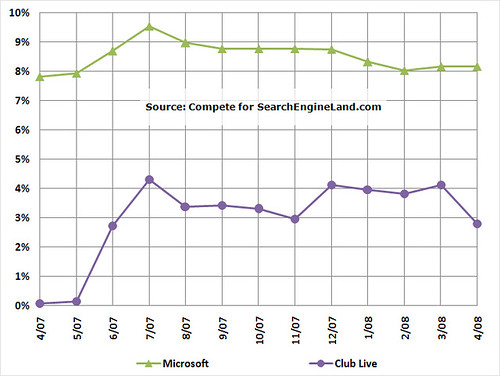 Now in both Indiana
Jones Search: Indy Meets Microsoft Live Search and
Hey Microsoft: Bribing
Searchers Is Fine; Frustrating Them Is Not!, I’ve covered how Microsoft
claims the gaming programs do indeed generate loyal, regular users. Yet in the
chart above, after the spikes in June and July 2007, the program doesn’t appear
to have helped with general search share at all. It stays flat, even later in
the year when Live Search Club’s own share rises.

I talked with Microsoft a little bit about this oddity yesterday. They
explained that the percentage of regular users generated out of the program is
very tiny — not enough to boost regular share. But they also said that the
lessons learned about building loyalty will be helpful for the more mainstream
loyalty program they have launched as part of
Live Search Cashback.
We’ll see!

Normally I’d also show the number of searches on each service, in addition to
market share. However, Compete has revised all of its figures to include Live
Search, so I don’t have the data quickly at hand to do a trend chart. Next time.

How to empower your SEO and digital marketing strategy with data
5 ways to get PPC and SEO working together
Processes, visibility and optimization: The keys to digital marketing transformation
SimilarWeb & Rank Ranger talk acquisition, SEO challenges, opportunities
Webinar: Grow revenue streams through web accessibility and compliance