One of the unique seasonal activities to do this time of year is to make a trip out to a nearby farm and wander through mazes carved out of corn fields. Designers of these mazes often make them to form interesting pictures or written messages when seen from a bird’s-eye view. I’ve selected a handful […]

One of the unique seasonal activities to do this time of year is to make a trip out to a nearby farm and wander through mazes carved out of corn fields. Designers of these mazes often make them to form interesting pictures or written messages when seen from a bird’s-eye view. I’ve selected a handful to look at here from Google Maps, Yahoo! Maps, and Live Search Maps, so enjoy!

Farms which create cornfield mazes are really lucky if they get their mazes captured in the satellite or aerial photos used by the online mapping providers. Cornfield mazes are by nature seasonal, so there’s generally only a small number of months in which their patterns could be seen and captured from the air. Those mazes that are lucky enough to get photographed while they are live can enjoy yet further promotional value all year long as people find the pictures and show them to their friends.

A few of the corn field mazes out there this year are sporting political patterns to derive a bit of promotional value, piggybacking on the fervor surrounding the presidential election.

Other cornfield maze creators appear to be using their crop art to yet further enhance their income by selling advertising space into their patterns — I’ve provided a number of examples of these below as well. Sponsorship messages and ads carved into fields are done by folks who are banking on those ads getting seen by people flying over, getting photographed, getting shown in evening news shows, and getting further distributed through online map images. I’ve spoken before about advertising targeting online maps, and it’s clear that mapvertising like this may grow as an ultra-niche marketing tactic, continuing to heat up in sync with consumer interest in online mapping systems.

Anyway, enjoy this small sampling of the cornfield mazes (as well as “maize field mazes”). Also, find a cornfield maze near your location this month and make the effort to visit in person to get the full, experiential enjoyment out of a really unique thing! Some of the sites I used when locating corn mazes are included at the end of this article, including some of the top corn maze directories which list mazes by their geography. Many of the farms out there offer additional activities such as picking out your own pumpkins, hayrides, smaller hay bale mazes, nighttime “haunted” maze visits, and more. 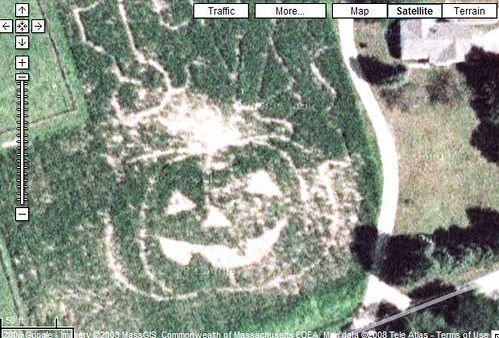 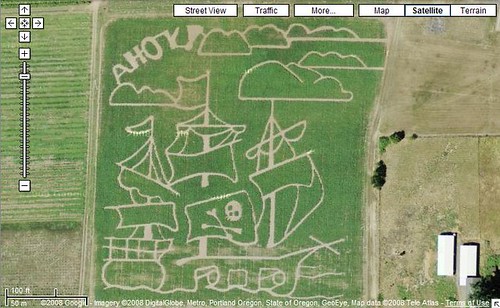 Baggenstos Farms – Previously had a pirate theme, as shown here. Their current maze is apparently sporting a message reminding people to vote in the 2008 presidential elections, and it has drawings of both McCain and Obama. For view of the current presidential maze layout, see this video. 15801 SW Roy Rogers Road, Sherwood, OR 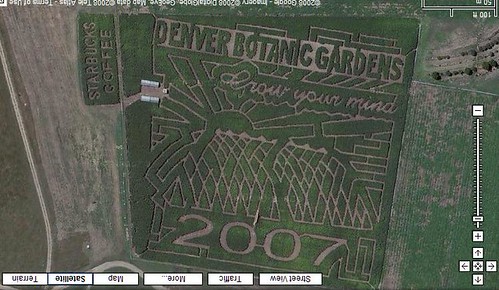 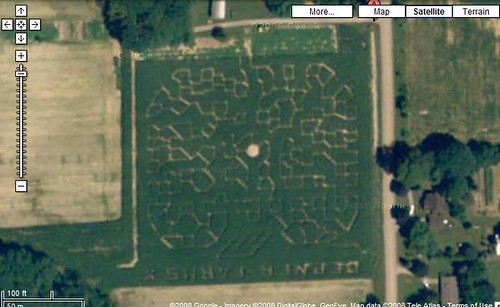 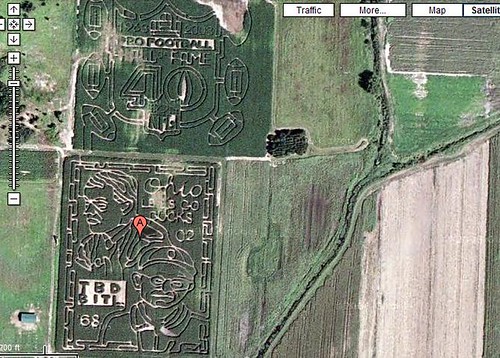 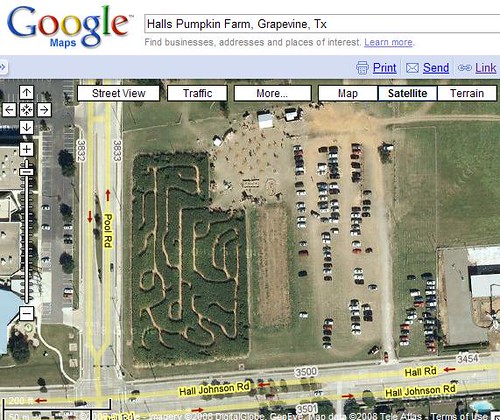 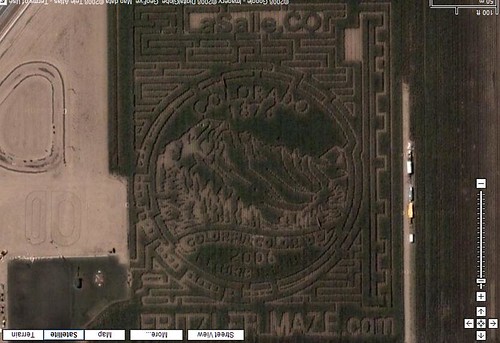 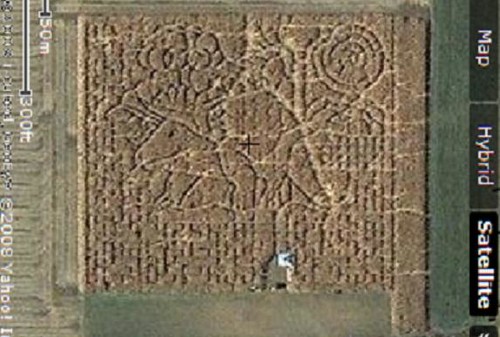 Heartland Country Corn Maze – Triceratops dinosaurs must’ve really been “in” as maze patterns in the past! Aspen Road and Hwy 11, Harrisburg, SD 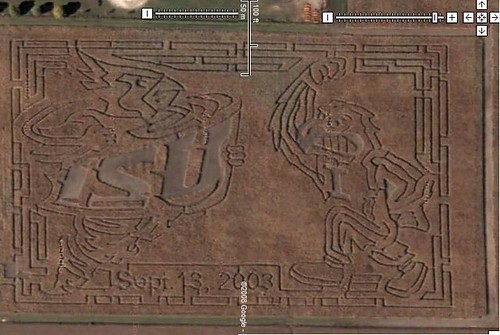 Dan-D Farms – A corn maze announcing the annual Iowa – Iowa State football game just East of Ames, Iowa. The University of Iowa’s ‘Herky the Hawk’ to the right and Iowa State University’s ‘Cy’ tornado mascot to the left. Below is the date of the game – Sept 13, 2003. Ames, IA 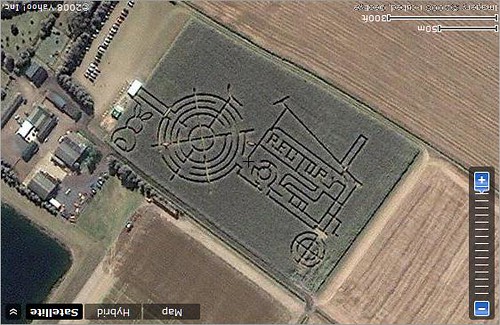 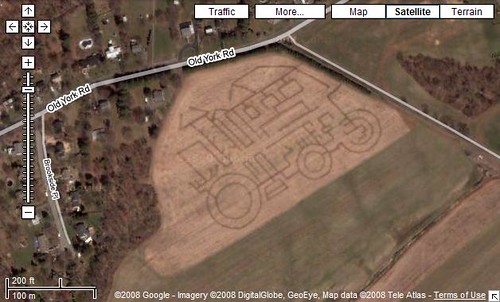 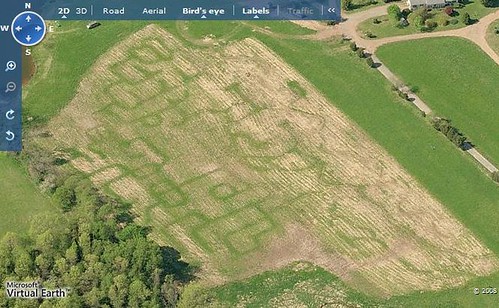 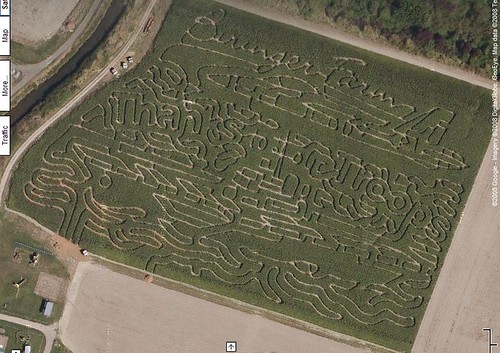 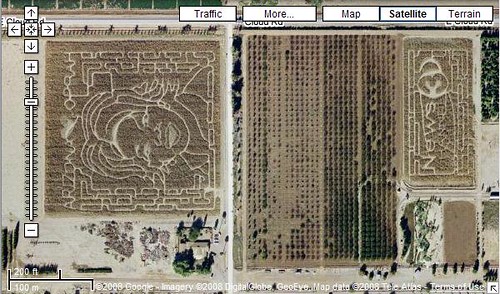 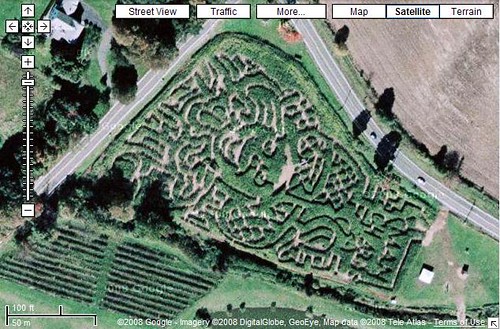 Lyman Orchards – a portion of admission to their mazes goes to support charities. They have a sunflower field maze during the summer. Intersection of Route 147 & Route 157, Middlefield, CT 06455 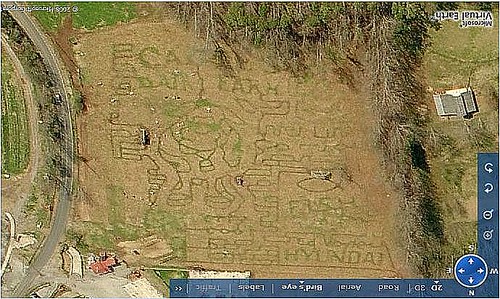 Cagle’s Dairy Farm – they sport 6 mazes “in one” and they lay claim to having the world’s largest corn field maze at 56 acres. Also check out the “crop ad” for Hyundai. 362 Stringer Rd, Canton, GA 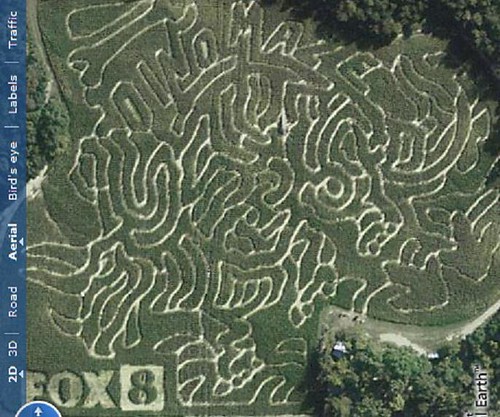 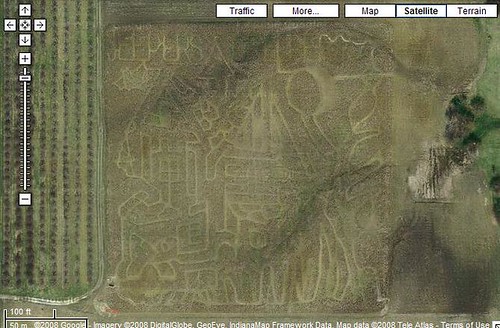 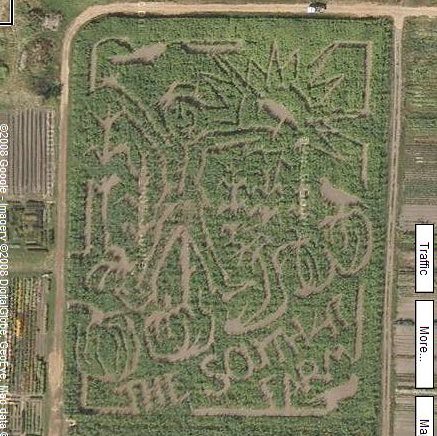 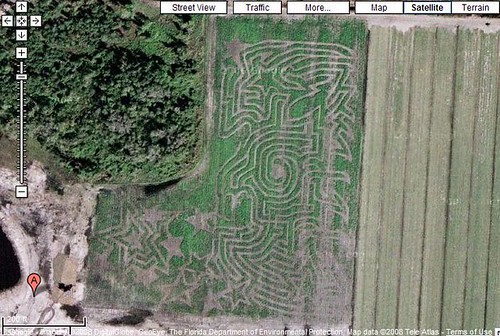 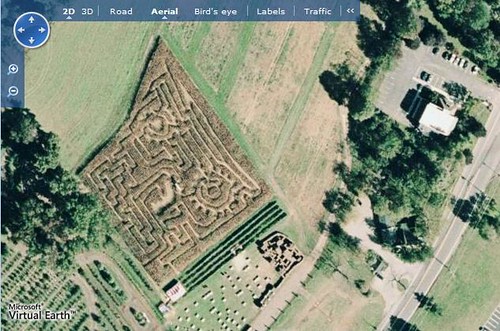 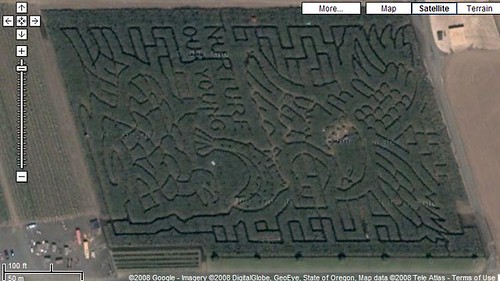 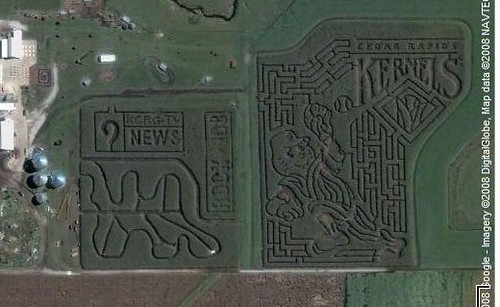 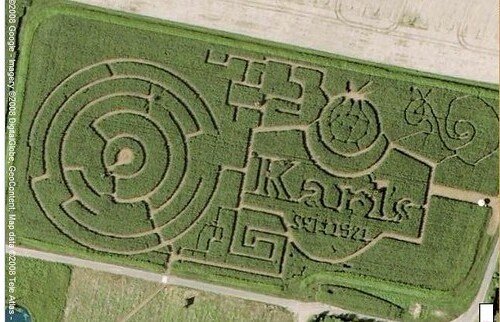 Research sources used for this article and places to find cornfield mazes near you:

Chris “Silver” Smith is a Search Marketing Consultant and writes for the Locals Only column at Search Engine Land.