Well-known internet marketer Jeremy “ShoeMoney” Schoemaker has filed suit against Keyen Farrell, apparently a Google employee alleged to have used Schoemaker’s US-registered trademark in search ads on Google. While issues over trademarks in search ads are heating up, the bigger issue in the case is why Google itself didn’t take action to stop the ads […]

Well-known internet marketer Jeremy “ShoeMoney” Schoemaker has filed suit against Keyen Farrell, apparently a Google employee alleged to have used Schoemaker’s US-registered trademark in search ads on Google. While issues over trademarks in search ads are heating up, the bigger issue in the case is why Google itself didn’t take action to stop the ads and whether an employee did indeed access Schoemaker’s AdWords account to gain competitive data.

Google’s trademark policy allows for trademarks to “trigger” ads — make ads appear when a trademark word is involved in a search query — but it prohibits advertisers from using trademarks in the title or description of ad copy. That’s the core of Schoemaker’s complaint [PDF file] — that ads were showing for his nickname, “ShoeMoney,” which is also the name of his web site and a registered trademark.

For example, here’s a screenshot Schoemaker provided of the ad using “ShoeMoney” in the title from last week: 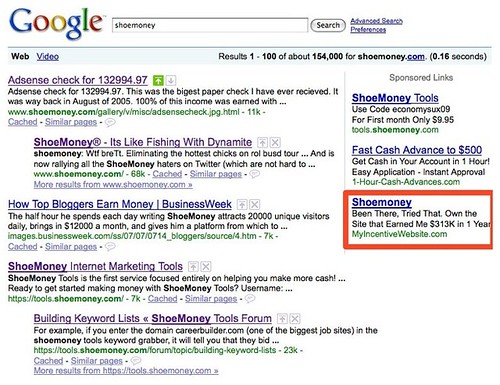 These ads have been showing for the past few months, Schoemaker told me via IM. They shouldn’t have, given that Schoemaker previously had filed a trademark complaint action with Google back in 2007. On November 1, 2007, Schoemaker was told (according to an email he forwarded to me):

Thank you for sending us your trademark complaint letter. Your complaint has been processed and the ad texts in question no longer include your trademark: SHOEMONEY. Please note, we only processed the exact trademark you submitted. If you would like us to investigate variations or misspellings of your trademark, please supply us with a list of the exact variations or misspellings and we will review them. Please do not hesitate to contact us with any additional questions or concerns.

That prevented anyone from using the word “shoemoney” in their ads, as you can see is still the case in the screenshot below, when I tried to create an ad with the word earlier today: 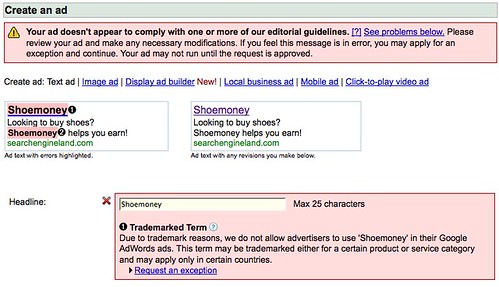 So how was it that these ads started showing? Somehow, the advertiser got an exception or found some other way around Google’s block. Since the advertiser also appears to be a Google employee, that raises serious issues about Google’s own internal policing.

As the TechCrunch article on the case explains, at first Schoemaker couldn’t tell who was behind the ads. While the ad pointed at myincentivewebsite.com, contact details for that site were masked using a privacy address for the domain name registration. So Schoemaker got a subpoena demanding that that the site’s web host hand over the advertiser’s name and contact details, he told me.

According to Schoemaker’s lawsuit, the advertiser was Keyen Farrell. As TechCrunch explains further, Schoemaker said he spoke with Farrell, who apparently denied any wrongdoing. As part of that conversation, Farrell apparently shared a list of terms he was targeting — which raised alarms with Schoemaker, as they were similar to his own list.

Doing more checking, Schoemaker found a LinkedIn profile where Farrell listed himself as working as a Google AdWords account strategist. That’s since changed (Schoemaker says it was changed the day he filed suit), but here’s how it looked from a screenshot that Schoemaker sent me: 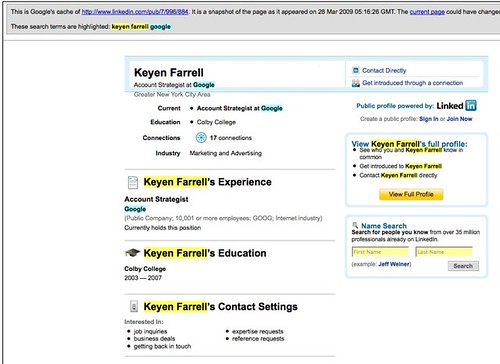 Farrell is listed as an employee with Google’s New York office, so all indications are that he does indeed work for Google. When I called and selected him by name from the automated company directory, I got to his voicemail that started, “Hi, this is Keyen with Google.” Farrell was also featured in a Spring 2006 article from Colby College about how he used Google’s ad systems to run an online business that he said put him “in the top one percent in income in the U.S.” If that was the case, of course, it makes you wonder why he apparently later worked what appears to be a low-level job at Google.

Talking with Schoemaker, he stressed that he assumes Google itself had no knowledge of Farrell’s actions, nor is he filing suit against Google itself.

Our goal in this is not for financial gain but to defend our trademark that we have spent many years building trust with. People [commenting on] the TechCrunch story talk like Google is going to write me a big check, but that is just silly. This is not going to be a cash flow positive thing for us I am pretty sure. And I do not honestly think nor do we have any evidence that Google was involved or had knowledge of this corrupt employee

I agree — Google probably wasn’t aware of what was going on. But it still raises questions about how people are able to bypass trademark blocks and how secure AdWords accounts are. Clearly an AdWords specialist would need the ability to review client accounts, but it’s still disturbing to think that they could be snooping for reasons unconnected with actually helping those clients.

As for Farrell, Schoemaker’s suit seeks:

I’ve asked both Google and Farrell for comment but haven’t heard back from either yet.

While we take this kind of allegation seriously, we’re not able to comment on specifics right now.