Google Maps Is Back On The iPhone: Native iOS App Released

Google has released its long-awaited map app for the iPhone. And it delivers all the expected features: voice-guided turn-by-turn navigation, traffic, public transit, Street View and so on. It’s better than Google Maps for Android because it has been built or rebuilt “from the ground up” and didn’t grow by accretion. The bottom line: it delivers. Yet […] Google has released its long-awaited map app for the iPhone. And it delivers all the expected features: voice-guided turn-by-turn navigation, traffic, public transit, Street View and so on.

It’s better than Google Maps for Android because it has been built or rebuilt “from the ground up” and didn’t grow by accretion. The bottom line: it delivers. Yet it’s also not 100 percent satisfying (at least in my initial test). I’m not sure what I was expecting.

It’s not integrated with Siri. You can’t say “I need directions to San Francisco” and be taken to Google Maps, as you once could. Instead you’ll go to Apple Maps. You can however use Siri to launch Google Maps (“Open Google Maps”) and then conduct your local search or directions lookup.

It’s also not integrated with Google’s iOS search app or Google search results on the mobile web. When you click a map image in either case you’re taken to the mobile-browser version of Google Maps.

Here are some quick screenshots from the new app I took this evening: Google has also released an SDK for developers so that they can once again use Google’s Maps and data on the iPhone instead of Apple Maps.

While Google Maps and navigation were never perfect (despite the gauzy, romantic reflections of some tech bloggers), the new app will give many people a kind of renewed confidence they were lacking with Apple’s mapping product. (The pressure is now truly on Apple to “uplevel” its maps.)

Comparing Apple Maps and Google Maps side by side I have to say I prefer the Apple Maps UI. It’s more polished and aesthetically refined. Most people probably won’t care about that. They just want to get from A to B with confidence. 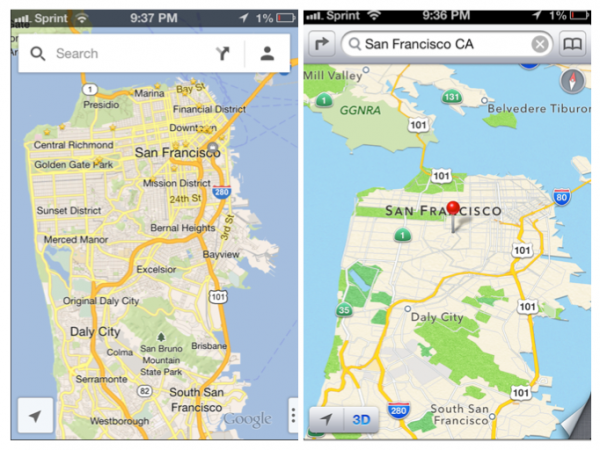 Tonight’s release is available in roughly 40 countries and 29 languages. It’s a big, global launch and should see massive downloads from iPhone owners all over the world. There’s currently no iPad version though the new Google Maps app will obviously also work on the iPad.

Postscript: Here’s the thing most people aren’t talking about or don’t realize: if Apple hadn’t done what it did and removed Google from the iPhone’s maps app we wouldn’t be talking about this much improved Google Maps experience for iOS.

The old “Google Maps” on the iPhone was a very weak version of its Android cousin. Google either wasn’t improving the app or Apple wasn’t allowing Google to do what it wanted. However if it wasn’t for Apple extricating Google from default mapping status Google wouldn’t have developed this impressive new app.

Accordingly, in retrospect, this drama was all necessary to get to where we are today — a place where iPhone users have much more choice and higher quality map experiences than they did a year ago.