Wouldn’t it be great if there was one mapping service that offers everything you need to plan a trip to somewhere you’ve never been? Sure, map sites are generally pretty similar. You can see maps, find business listings, get driving directions, see images and stuff like that. But it’s actually more complicated than that. At […] Wouldn’t it be great if there was one mapping service that offers everything you need to plan a trip to somewhere you’ve never been?

Sure, map sites are generally pretty similar. You can see maps, find business listings, get driving directions, see images and stuff like that. But it’s actually more complicated than that.

At least it was for me.

My wife and I recently visited Maui, Hawaii for the first time. We spent a week on the island celebrating our 20th wedding anniversary and, after getting advice from all of our family and friends, we had enough must-sees and must-dos to fill a month there.

After we decided how we wanted to spend our week, my job was to plan/map it out. It soon became a study in the differences between Google Maps and Bing Maps – the two sites I relied on most heavily. (A third mapping service was helpful once we were on the island.) Here’s a look at the strengths and weaknesses of two major mapping services — a summer vacation showdown, if you will.

As much as I love some of the cool stuff that Bing Maps offers, I’m usually a Google Maps user. And there’s one main reason for that: When it comes to basic mapping, the most fundamental piece of the puzzle, Google’s maps are much more readable and usable than Bing’s. Consider these two screenshots showing Kahului, the area immediately around Maui’s main airport. To my eyes, the Google map is more visually attractive and, therefore, much easier to read and use. The wording and labels stand out more, main roads and minor roads are delineated more clearly and colors are used more effectively to indicate things like the airport and various malls/shopping centers.

Justin O’Beirne, who writes the excellent 41latitude.com blog about mapping technology, drew the same conclusion during a series of posts comparing Google, Bing and Yahoo maps:

Google’s labels seem to “pop” much more than the other sites’ labels. Major cities also seem to stand out much more. And whenever you’re quickly scanning the maps, the label you’re searching for seems to stand out just a little sooner on Google’s maps.

For my vacation planning purposes, the winner on this point is clear.

For our week-long trip, we needed a lot of access to local business information. Even though we did plenty of advance research choosing some places, we still needed to find local restaurants, places to shop for gifts to bring home, places to find snorkeling gear and so forth.

We used both desktop and mobile devices for these searches and, for the most part, both Google and Bing provided very good local business results and directions to get there. There was one notable exception: On a search for “lahaina restaurants,” Bing inexcusably showed us results that covered the entire western coast of Maui, while Google nailed the targeting right into Lahaina’s not-so-big footprint. At the end of our trip, a third mapping service came into play for a separate business-related search. We needed to find a gas station near the airport before we returned our rental car. This was a mobile search, so I fired up the MapQuest iPhone app because it has several presets for different types of businesses — including gas stations. A search for “ogg” (the airport code) combined with the gas stations preset button led us exactly where we needed to go. Yes, it’s true that the Yelp and Google Places iPhone apps also have “gas station” presets, but there’s a difference: Those apps default to your current location and it’s impossible to use the presets to search a different area. (Well, it’s not impossible, but it’s a hassle to have to turn off location awareness first, especially when the whole point behind the apps is to search for things near you.) It’s also true that a desktop search on Google Maps for “gas stations near ogg” would’ve produced equally good results (a desktop search on Bing isn’t nearly as good for that phrase), but this was a specific mobile search scenario, we were on the other side of the island, and I knew that MapQuest’s app offered me the quickest access to what I wanted to find.

Winner, Business Listings and Directories: none (Google and MapQuest tied)

Bing has invested a lot of time and money into the imagery aspects of Bing Maps, and it really showed during our trip planning. Since we were going to an unfamiliar place and planning several unfamiliar drives/adventures, I wanted to visualize what we were doing as much as possible.

For example, one friend gave us a tip about a great place to snorkel that’s not crowded and is filled with fish and sea turtles. It’s a small bay where the Honokeana Cove condominiums sit, but you don’t have to be renting there to use the small beach and get in the water. This isn’t the kind of tip you find in the Maui guidebooks, so in addition to finding where it is and how to get there, I wanted to see this place online first so I could be sure that we later found the right place.

Both Google and Bing took me right to the condominiums when I searched for “honokeana cove.” But Bing separated itself dramatically when I started looking at imagery.

With Google, I was limited to the standard, overhead satellite image. It was somewhat helpful to give me a sense of what I should see when we visited, but as with much satellite imagery, it gets blurrier the more you zoom in and doesn’t offer a very detailed view. But this is where Bing shined. As I zoomed in, Bing Maps automatically shifted me from map view — not to the overhead satellite image, but to its 45-degree imagery. And unlike satellite images, the closer I zoomed in, the more detail I saw about parking, the walking path, and so much more. I could also spin around to see the area from different angles, like this: 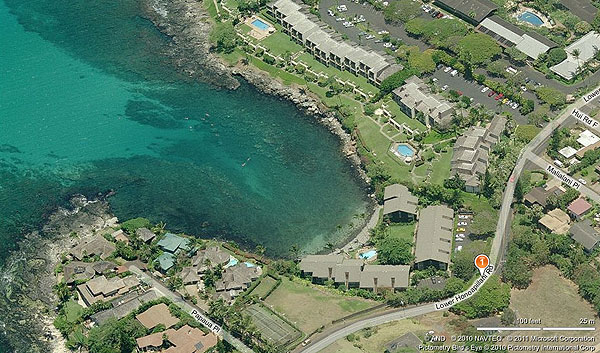 Bing’s 45-degree aerial images have been around a long time — Microsoft partnered with Pictometry for those images way back in 2005. Google only added 45-degree images to Google Maps last summer, and the feature is still only available in limited cities around the world (listed on this official list/map that Google maintains).

One more thing: While looking at these 45-degree angle images, I decided to click into Bing’s “Map Apps” collection and found a Photosynth set of images uploaded by a user. I’ll spare you all 24 photos and just show one screenshot: 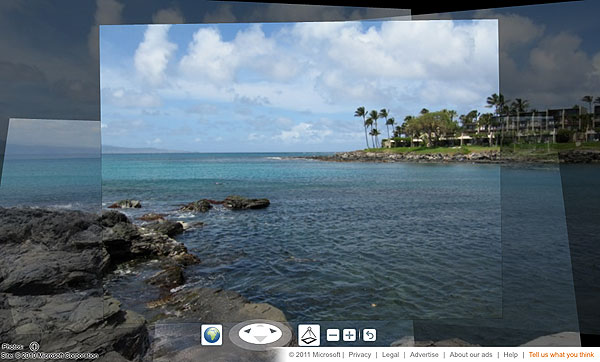 The Photosynth imagery was another helpful feature that let me see my search results much more robustly than Google’s overhead satellite images.

That’s not to say Bing was the only source of helpful images. In fact, while Bing has been pouring its energy into aerial images, Google has been focusing on ground images in recent years via its Google Street View service.

Street View proved helpful as we were planning to drive Maui’s famous “Road to Hana.” We used an excellent book called Maui Revealed that points out dozens of diversions like waterfalls, ponds and other places where you can stop to enjoy amazing scenery. But finding some of these spots is difficult; they’re sometimes as specific as “park your car XX feet after the guard rail and look for a path in the woods.”

For example, the instructions to find one waterfall that we wanted to see are as follows:

At 8/10 mile past the 10-mile marker on the ocean side of the road is a turnout with a telephone pole. There’s a well-worn path to the right.

Seriously??!! Well, that sounded pretty daunting until I fired up Google Street View, poked along the highway step-by-step and eventually found this: That’s the spot we wanted, and finding it on Street View made me a lot more confident that we’d find it while driving, too. Google helped out like this with a couple different diversions we wanted to explore, which was cool. What wasn’t cool is that there are substantial sections of the Road to Hana where Street View isn’t available.

What’s interesting to consider is the two different approaches Google and Microsoft have taken to map-related imagery. Google’s focus has been on Street View, while aerial imagery is lagging behind and seems like a secondary project. MSFT/Bing has taken the opposite approach, with a heavy emphasis on aerial imagery, while only recently making public plans to expand its Streetside ground photo service.

In any case, because Street View came up a bit short, and because Bing’s 45-degree aerial imagery and Photosynth are much better than what Google offers, the choice here goes to the underdog.

If there was a point system attached to these categories, Google would probably get a slight win over Bing based on its performance in basic mapping as well as business listings/directions. But Bing’s emphasis on aerial imagery was extremely helpful with vacation planning, and MapQuest’s search presets also got us the local info we were looking for right when we needed it.

In other words, there’s no obvious winner in this maps showdown.

If anything, this proves that there are pretty substantial differences still between some of the major mapping/search services. Depending on your situation (what you’re looking for, whether you’re on the desktop or mobile), you might find better information and results by switching from your favorite map site to something else. It’s not convenient, but it’s the current state of search and mapping services.

It leaves me wondering: Will we ever have one mapping service to rule them all?