The Google Sewage Factory, In Action: The Chocomize Story

Google’s CEO Eric Schmidt has quite famously been on record many times talking about how the web is full of garbage. It’s a cesspool out there, he’s said. Today, a short fast look at how his own company pollutes the web. Right now, one of the “trending topics” on Google is the word “chocomize,” as […]

Google’s CEO Eric Schmidt has quite famously been on record many times talking about how the web is full of garbage. It’s a cesspool out there, he’s said. Today, a short fast look at how his own company pollutes the web.

Right now, one of the “trending topics” on Google is the word “chocomize,” as you can see here: 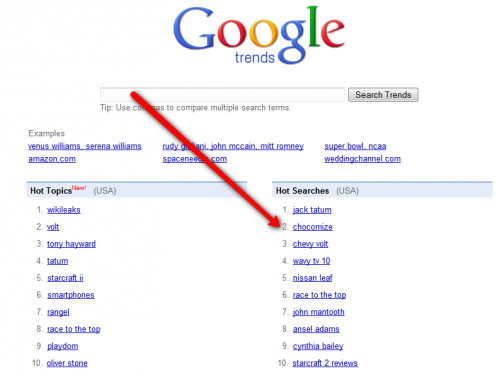 A term like “chocomize” will “trend” on Google when there’s a sudden, out-of-the-ordinary spike in searches using it. That’s certainly the case with chocomize, which Google Trends reports as having “volcanic” activity:

What’s going on? Brent Payne wondered and tweeted about it. That caught my eye, so I went exploring.

Chocomize is a web site that lets you create custom chocolate bars. Cool! But why’s it suddenly a popular term today? Fortunately, Google Trends is set to give me the answer. On the page that Google Trends makes about Chocomize, there are news results: Awesome. Now I can discover what’s happening. The first result gives me this: Not so awesome. That page explains what Chocomize is but not why it suddenly became popular. And, um, what’s a horror movies site doing reporting about chocolate bars?

Answer? That little arrow, pointing at the Google ads. Chocomize is a popular term, so if you can draw traffic to your page, then you’ll increase the chances of getting clicks on your ads.

That page isn’t adding any value to the web. If it didn’t exist, we wouldn’t be the less savvy about Chocomize. But thanks to Google Trends, we’ve got a big red flag up in front of publishers that wish to pollute Google’s results with this type of garbage.

How about the number two news site listed: Worse. Now we’ve got ads even more in our face — Google ads, no less — and still no idea why Chocomize is trending.

Remember, these are results from Google News. There’s supposed to be some actual “news” to why these pages should be listed. But again, the only reason this page exists is probably because the publisher saw Chocomize trending and wanted to ride it for some traffic, regardless if chocolate falls outside the typical scope of “TV and Anime Buzz” site that this page is hosted on.

After drilling further into Google News: And then selecting the “all 16 news articles” link under the first “cluster” of stories to drill further: The news articles that do appear (5 rather than the 16 promised) reveal what’s behind the term spiking in popularity. The top story on the list is a CNN article about the company that appeared today, probably in conjunction with CNN airing a report. That television presence got people doing searches to find our more about the company.

The pollution within Google News is ridiculous. This is Google, where we’re supposed to have the gold standard of search quality. Instead, we get “news” sites that have been admitted — after meeting specific editorial criteria — just jumping on the Google Trends bandwagon, outranking the actual article causing the term “chocomize” to be popular, polluting the news results and along the way, earning Google some cash.

The situation is worse within the Google Blog Search results that Google also features via Google Trends: On the one hand, I love Google Trends. It’s fun seeing what the top terms are that are sparking interest. It’s also smart publishers that tap into this type of data.

On the other hand, it’s clear how much garbage that Google has caused to be generated, simply by publishing the trends. But that garbage wouldn’t happen, if it didn’t know it was going to be rewarded. It is, both with traffic from Google and from revenue from Google for those carrying its ads.

It shouldn’t be that hard for Google to police what shows up in response to what it publishes on Google Trends. Spam sites ought to be nabbed. AdSense sites ought to be shut down. News publishers abusing the very lucky position they have of being in Google News, by routinely tapping into Google Trends topics that aren’t relevant to their publications, should get the boot.

How about that as a start to dealing with Schmidt’s web garbage problem? Seems like Google itself has plenty it can do.

Now I’m going to sit back and watch this article rise to the top of Google News. After all, if everyone else is doing it….

Postscript: Here’s some irony. As I expected, Google Trends now shows this story as a news item for Chocomize, as the lower arrow highlights: But what’s that the top arrow points at? It’s a “news” story about my news story! Here it is:

The arrows point to some of the content that’s been “scraped,” or automatically copied from my post, along with other content gathered from across the web. All of this is to make yet another quality page for “New York News Today” to rank for this term in Google News.