Google Turning My Maps Into Social Mapping Platform With Collaboration, Ratings, And Comments

After core search, without question Google Maps (including Earth) is the company’s most successful and popular product. And lately Google has taken the product in very interesting directions. Among the most interesting things Google has done with Maps was the launch of My Maps in April of this year. Since that time, more than 7 million maps have been created according to Google. Then, last month Google introduced community editing and collaboration for My Maps. And today, Google is introducing comments and ratings for My Maps.

In countries where the base data is poor or non-existent, Google is relying on My Maps to fill in the blanks, as well as provide creative and interesting collections of local information. Beyond this, the community is starting to make the content available on Google Maps increasingly rich and unique, moving well beyond the base listings available from the various commercial databases.

Stepping back, the group collaboration features and now the comments and ratings start to turn My Maps into a social mapping platform or a kind of social network. Here’s an example of one of the new ratings/comment pages: 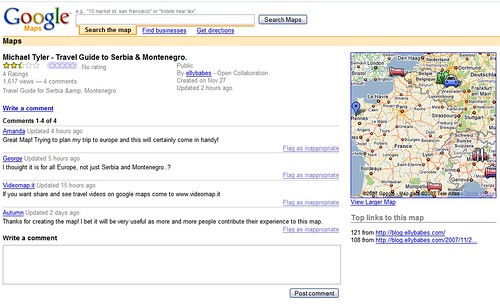 But there’s also a functional reason to add ratings and comments to My Maps: to start ranking maps that generally duplicate content. In other words, when you have, say, 27 “places to stay in Paris” maps, how do you rank them for presentation? Community ratings is one way to do that or to influence the ranking as part of a broader algorithm.

Eventually the My Maps content will also make its way into Google Maps for Mobile and, potentially, GOOG411, though integration into both poses challenges.

As Google, Microsoft, and Yahoo increasingly combine community and dynamic mapping, independent companies working in the same area will be challenged to survive. Accordingly,
Platial recently acquired competitor Frappr to build more scale and attempt to respond to Google’s growing presence in the “social mapping” segment.