Google Video Frames a Search Engine from Google Operating System describes how Google Video redesigned to include a frame at the top of the video. The frame includes “related videos,” “email this page,” and “flag as inappropriate.” You can also collapse the frame to view just the video itself. The search box is now at the extreme top on the left of the page, with some video details, a rate this video feature and a still image from the video. In the middle portion is the video player. Here is a screen capture of a metacafe.com video, framed into Google Video.

YouTube Redesigns and Moves to Google Accounts from Google Operating System reports that YouTube is also redesigning. You can see the old version over here and the new version over here. Here are screen captures of both. 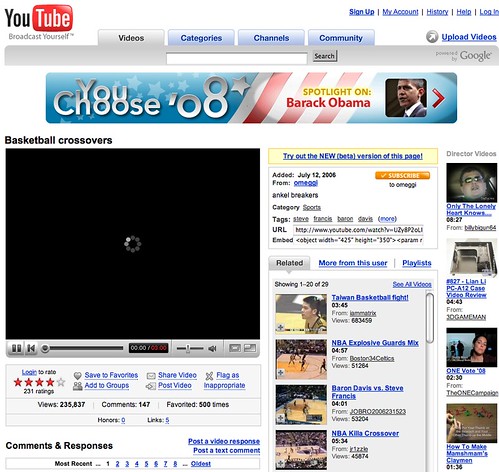 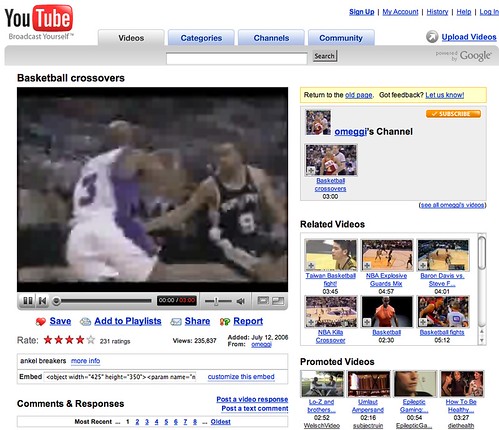 Postscript: One more tidbit spotted at InsideGoogle. YouTube has some funky debugging comments, some including:

I received a statement from Gabriel Stricker, Google spokesperson:

In January, we gave a preview of how Google Video and YouTube will evolve going forward. We mentioned that Google Video will continue to focus on search and innovating technologies to make more information more available and accessible. And we reiterated that YouTube will continue its place as the leader in online video — and that over time we envision most user-generated and premium video content will be hosted on YouTube.

Now we’ve made even more progress towards realizing that vision. On Google Video, users will now be able to watch videos from various websites via a web crawl. For those videos which were not uploaded to YouTube or Google, users will be able to see a thumbnail image of that video and then have the ability to be redirected to where the video is hosted in order to watch it in its entirety. In the US version of Google Video (video.google.com), users will have the option to expand a video to view up to 15 thumbnails in a javascript slide-open window. This is part of the broader goal to innovate “video crawl,” which lets users search for the world’s online video content, irrespective of where it may be hosted.