Has Google Maps Switched From PageRank to “BizRank”?

For those of us who work in local search optimization, it's clear that Google PageRank is less and less important as a factor in result rankings. It's not difficult to find instances where businesses with lower PageRank are listed higher than competitors in the local 10-pack, and some like Matt McGee point out cases where companies with no website at all are ranking well. These cases show that in Google's local searches, PageRank has been pushed aside in favor of a ranking process that's often independent of websites: I'll call it "BizRank".

For those of us who work in local search optimization, it’s clear that Google PageRank is less and less important as a factor in result rankings. It’s not difficult to find instances where businesses with lower PageRank are listed higher than competitors in the local 10-pack, and some  like Matt McGee point out cases where companies with no website at all are ranking well. These cases show that in Google’s local searches, PageRank has been pushed aside in favor of a ranking process that’s often independent of websites: I’ll call it “BizRank”.

Now, the fact that Google Maps contains listings with no associated websites is nothing new. When they first launched their service that mashed up keyword search + yellow pages directory + map interface, it contained many listings with no sites.

Yet, for many of us in search marketing, our focus and even some level of unspoken agreement has been that listings with website URLs have a clear advantage over bare-bones listings that only sport address and phone numbers. But, what has changed is that the ranking factors seem to have shifted by some degree to give a bit less preference to websites and the relative rankings of websites. PageRank seems to have become a far weaker factor in the ordering of businesses in Google 10-packs and Google Maps.

In this year’s installment of David Mihm’s Local Search Ranking Factors survey, participants rated inbound links as lower importance in influencing rankings compared with the previous year. And when rating the impact of “PageRank of Homepage/Highest-Ranked Page,” participants gave that only a 1.52, or “very low importance” (Disclosure: I personally rated it higher than that, but I cravenly claim that this was because “PageRank” is sometimes used to denote the entire combo of 200+ ranking factors Google now uses, and I was a bit tired out when I worked through the survey).

Most of us would probably still agree that merely having a website appears to give a business more potential opportunities for ranking higher in the local SERPs. Consumers like access to extra info, straight from the business itself, and websites give businesses the chance to control their own messaging and to persuade consumers to convert.

It’s easy to find instances of web-less businesses outranking listings that do have sites in Google 10-packs or Google Maps. For example: 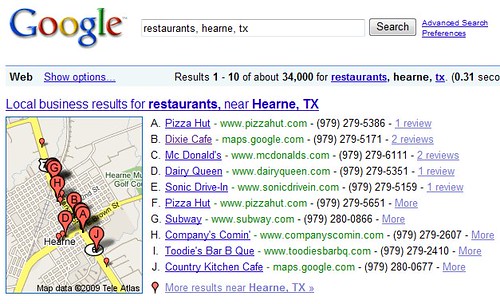 The second listing has no business website associated with it, but it outranks other local listings in the same keyword category.

The implicit message that examples like this convey is that some other ranking factors must be weighted much more heavily than PageRank. Since there are also many instances of lower PR sites outranking higher PR sites, the combination of other factors involved must be more influential than PageRank alone.

Here’s a brief list of some of the other top factors that I believe may be getting more weight:

Keyword relevance. There appears to be a high correlation between keyword content in listing/profile/site content and the user’s search query.

Location proximity. The business location needs to be near/within the area being searched upon. While some of us believe that this isn’t being given quite the level of importance it once was, it’s common sense that the business needs to be near the area or it won’t work for the consumer. Previously, Google appeared to make the companies closest to the search centroid have higher rank, but now that’s shifted as the businesses seem to only be within the area being searched and actual rankings are based more heavily on other factors. Mike Blumenthal stated in the Local Search Ranking Factors survey that “Having a high Location Prominence Score is a 5 in terms of importance…”. He’s probably referring to Google’s local search patent, “Scoring local search results based on location prominence”, described by Bill Slawski. Listings need to be geographically relevant to have a chance to appear in the results.

Business viability confirmation. One of the biggest problems in local SERPs is trying to weed out no-longer-valid business listings. When companies close up shop, they often do not turn off websites or notify directories to delete their business listings. Further, even once deleted, listings frequently “return from the dead” as your data suppliers reintroduce the same defunct listings from their sources. These “zombie listings” create a very poor user experience when consumers try to call phone numbers or visit stores which are no longer in operation. So, I believe that Google has added weight to factors which provide evidence that the business is actually still in operation. Some of these factors include:

References. As Google seeks to move away from cold and sometimes arbitrary criteria for ranking businesses, they are looking for signals which could indicate relative quality and popularity. Hence the increasing interest from some of us for a somewhat vague signal called “citations” or “references”. On the face of it, one would figure that user reviews and ratings would provide this, but those signals are awfully prone to manipulation by the business or by competitors. Instead, things such as mentions about the business in blog postings, news stories, and email notes may provide a bit more concrete source for relative ranking. In this context, a “reference” could be when the URL, business name, street address or phone number are mentioned. All indicate that the business or location has some significance.

Have I oversimplified what’s involved in effective local SEO by conjecturing BizRank and its associated factors? Probably.

But, there’s no question that PageRank is of less weight in the Google Local search result rankings, compared with simple keyword search. Listings with no websites can outrank businesses that do have sites. So, some combination of signals are at play which are now stronger than some of the classic SEO components. It may not be called “BizRank” within the Googleplex, but something like what I’ve described is at work.

More importantly, this has the potential to spill over into the regular keyword search results and impact rankings there as well. If a local website is ranked higher than its competitors in Google Maps, it perhaps should also rank higher in the regular SERPs as well, for the same reasons.

As Google now has expanded the influence of users’ locations by showing more local results for non-local-specific queries , we could be on the cusp of a significant paradigm shift if they decide that the Google Maps algorithm should begin influencing rankings within the regular keyword search results.