How Google & Yahoo Make Money Off A Twitter Typo Domain

Like many people, I misspelled a domain name today when I was trying to visit a web site. I typed Twiter.com (with one T) rather than Twitter.com. I wasn’t surprised to land on a site with ads, as is common when entering typos. I was surprised that both Google and Yahoo were making money off […]

Like many people, I misspelled a domain name today when I was trying to visit a web site. I typed Twiter.com (with one T) rather than Twitter.com. I wasn’t surprised to land on a site with ads, as is common when entering typos. I was surprised that both Google and Yahoo were making money off those ads.

The practice is known as domaining. And before some domainers start working up heated rebuttals, let me make it clear. There’s nothing wrong with domaining. If you were lucky enough or smart enough to land a generic domain like usedcars.com or taxforms.com, my hat’s off to you. It’s well known that people will simply slap words together, tack on a .com and see if they reach a site that has information about a particular topic relating to those words. Domainers earn off that traffic, and no one is misled when visitors directly navigate this way.

So saying domaining = spamming is the same as saying SEO = spamming. Neither is true. But there are spam tactics that happen in both areas along with the legit stuff. In the domaining world, it’s the typo traffic that’s often scummy, in my book.

Typo domains are domains that are nearly identical to the domain name of another well known brand. Here, there is often harm. Someone expecting to reach a particular site instead lands on a different one that’s cashing in on the other brand’s fame.

OK, it’s the person who is entering the domain name wrong in the first place’s fault, right? It’s like they dialed the wrong phone number. Why shouldn’t a domain owner be able to earn off of misdirected calls to their phone? Or, it’s the “real” company’s fault for not registering all the typos out there.

What about companies that have a name in use before another company becomes more famous? Is there really anything wrong with UTube — a well established pipe company — benefiting from a spike in traffic after some upstart YouTube video site came along? Or in the case of Twiter, that domain existed well before Twitter became popular, so why shouldn’t it tap into new found popularity.

These are fair objections. In counter to them, some typo domains are often registered after a brand becomes popular, with the obvious intent of riding on someone else’s coattails. For another, it simply violates the policies of some ad networks, Google’s included. In other words, the fault isn’t with the domain owner themselves. It’s with companies supplying ads in violation of their own guidelines or policies.

That leads us to what I saw when I reached Twiter.com, the single “T” web site: 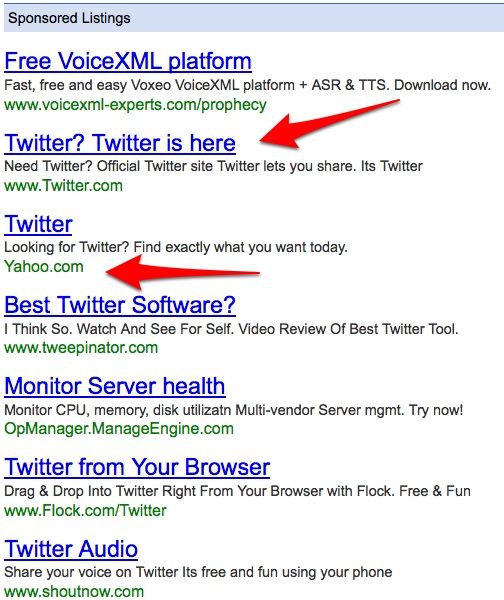 These ads are provided by Google, not that anything on the page tells you this. Domain ads apparently aren’t forced to carry those “Ads By Google” notifications as with contexual ads. That’s a handy way for Google to distance itself.

The first and fifth ad indicates a relevancy issue for Google advertisers. If you’re advertising “Free VoiceXML platform” or “Monitor Server health,” why on earth is someone from Twiter (one T) going to convert for you? They might click out of curiousity, but the probably aren’t going to buy (in fact, there’s a lawsuit against Google over the quality of domain ads pending. Google’s has also been sued over trademark issues with typo domains).

Now look at the second ad, which I’ve pointed an arrow at:

That ad surprised me. Really, Twitter (that of 2 Ts) decided to buy an ad for its own name via Google? Actually, no. Instead, it’s a Twitter user that bought the ad, driving people to their particular profile which, while indeed being on the official Twitter site, isn’t providing Twitter but rather a pitch for a book: 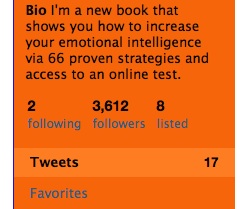 Clever person, right? Yes, but they also likely being misleading. That would violate Google’s ad guidelines and also may violate advertising laws in various US states, as well as nationally and in other countries.

That ad also shows two flaws in Google’s ad system. Clearly no human being looked closely at this ad, to review it for quality guideline violations. Meanwhile, Google’s requirement that the display URL in an ad match the domain name someone arrives at get exploited. This ad correctly shows a Twitter.com domain, even though the ad itself doesn’t speak with the authority of Twitter itself.

Check out the third ad, with an arrow pointing at the domain (which I’ve also bolded below):

Why yes, I was indeed looking for Twitter. Glad to know that Yahoo has it now. I guess I missed news of that deal being cut. Let’s go get us some Twitter at Yahoo: 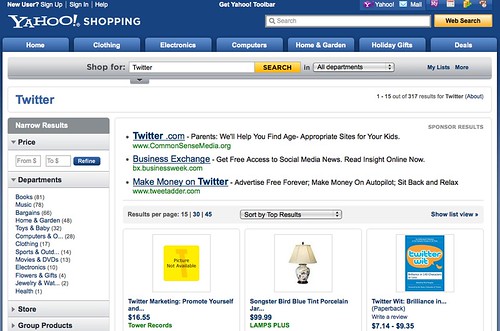 Ah, Twitter, er, shopping results. Maybe that lamp beams out tweets, when you turn it on. The results are kind of crummy. But that’s OK, because right at the top of the page, we get three paid search ads from Yahoo.

Now, it’s not Yahoo doing this directly. Looking at the URL that brings me to the shopping page, I see an affiliate reference. So this is someone earning money by driving Yahoo traffic. But Yahoo takes some of the blame here. It’s their affiliate, getting paid by Yahoo, and Yahoo should be policing this.

Yahoo, by the way, joined a coalition against typo domains back in 2007. They’re no longer listed as a member, which given these type of ads, is probably best.

The rest of the ads are all products somehow related to Twitter, so at least the misleading aspects aren’t there. But there still seems to be a violation of Google’s domain ads program policies:

Domains submitted for the AdSense for domains program may not violate any trademark (and related rights), copyright, trade secret, patent or other intellectual property right of any third party….

At best, Google might argue that Twitter hasn’t submitted a formal complaint, so as far as it knows, there’s no trademark violation happening. That’s still pretty weak. Does Google, which often holds itself out as championing the relevant organization of information, really want to hold its head up about what’s happening on that page?

I don’t think so. That’s especially so when you consider the type of ads that show up on Google’s own site for a search on twitter: 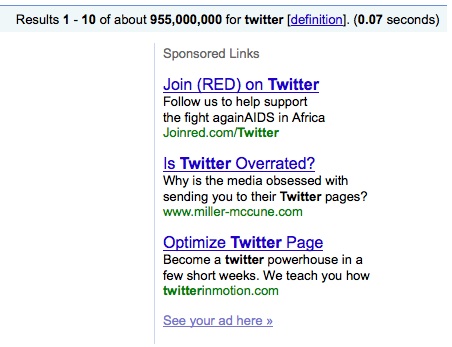 If those ads aren’t good enough to be shown on the shining storefront that is Google’s search results page, they don’t get any better being plastered on some dark alley of the internet.

Postscript: After publishing this, I sent these questions to Google.

In response, I was emailed this statement:

We don’t comment on specific ads or domains – but our AdSense for Domains policies are here. When we’re notified of complaints, we investigate for compliance with our policy.  We’ve found that advertisers enjoy the benefits of the additional reach that AdSense for Domains offers.  Many advertisers find that ads on parked domains perform as well as or better than ads on more traditional search and content sites.

Today, the site is no longer showing ads from Google. Instead, another company is providing the paid ads.