The start of this month saw the UK hit by the worst snowfall it had seen for nearly 20 years. Whilst the amount of snow involved (about 1 foot at its worst) would barely count as a sprinkling in parts of North America or Scandinavia, it brought the UK’s (mostly 100 year old plus) infrastructure […]

The start of this month saw the UK hit by the worst snowfall it had seen for nearly 20 years. Whilst the amount of snow involved (about 1 foot at its worst) would barely count as a sprinkling in parts of North America or Scandinavia, it brought the UK’s (mostly 100 year old plus) infrastructure grinding to a halt. This meant that, along with millions of others, I was trapped at home on the Sunday the 1st and Monday the 2nd of February and that, like millions of others, I turned to the Web to entertain me and keep me informed.

As it had been predicted well in advance of the snow actually starting to fall, by the time the streets of southern England did start to turn white, a suitable hashtag had already been settled upon for the millions of Britons using Twitter who wished to catalogue events. And so, as Americans started to gather round their TV sets to watch a load of ads, interspersed with some ‘sport’, the phrase #uksnow became the most used on Twitter, beating even the Superbowl (for a time at least).

By the time that Monday morning rolled around, and large swathes of the country realised that they essentially had a day off, the web really started to show what a wonderful thing it can be. A chap called Ben Marsh created a neat little mash-up which tracked people’s Tweets of the snow onto a map, providing real-time UGC data on the severity of the weather. Showing that useful tools weren’t confined to Twitter, one fine soul decided to build a tool that checked geo-tagged photos on Flickr to allow you to find the nearest snowman. 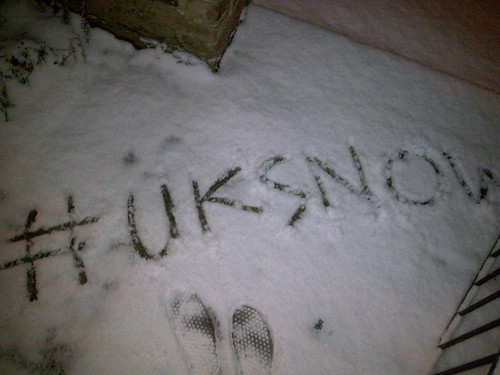 And over on flickr, whole groups of photos had been created of the snow and the magical effect it was having on the British landscape. One of these groups even used my attempt to create a real-life hashtag (above) as its icon. Finally, as if to disprove all of those who say that the Web and most of the stuff on it is a waste of time, Twitter and Facebook were used to organise a flashmob snowball fight. Of course there were some who didn’t understand the real relevance of the Web, and insisted on using it to provide updates on travel news, advice on how to get to work, and other useless bits of trivia.

Throughout all of this I sat at home and marveled at the way in which people were using Twitter, Flickr and a whole host of other sites to communicate, share information, create and generally have a good time. And it made me realise that those of us who work in social media, or the web in general, can often forget that for most people, the web is a tool and something to be enjoyed.

And whilst this may seem like an obvious point to make, I think it highlights the problems that many brands face when trying to decide what to do online. As Ethan Jarlewski, a character in Douglas Coupland’s novel JPod, says:

Why do companies like Toblerone or Pepperidge Farm bother having websites? As if people are going to say to themselves, “Gee, I wish I knew more about Milano cookies. I know! I’ll go to their site!

And just as it highlights the difficulty brands face, it also makes clear exactly how much of a problem many of these social media sites have in building a robust revenue model: because when people are having fun, they often don’t want to be sold to. But, for now at least, I’ll let others worry about that (or not worry about it in the case of Twitter) and just remember how lucky I am to be able to do this stuff for a living.