Until Andy Murray recently gave hope for a British man winning Wimbledon for the first time since his clothing’s namesake Fred Perry, the news here in the UK had been almost entirely full of stories about politicians, their inventive expenses and the political careers that had come to a premature end (or overdue end, depending […]

Until Andy Murray recently gave hope for a British man winning Wimbledon for the first time since his clothing’s namesake Fred Perry, the news here in the UK had been almost entirely full of stories about politicians, their inventive expenses and the political careers that had come to a premature end (or overdue end, depending on your point of view) as a result of the claims.

And yet the news that  one of the most senior members of Gordon Brown’s government was resigning doesn’t seem to have caused much stir at all. Just last week, David Miliband, the Foreign Secretary (equivalent to the Secretary of State in the US), used his Twitter profile to anounce his resignation: 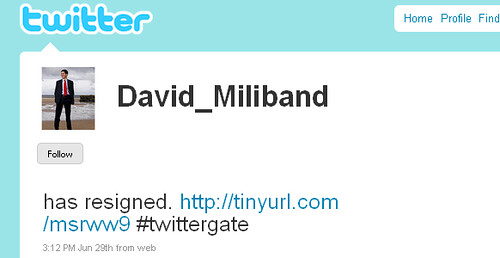 You would imagine that news such as this would be on the front pages of every major news story, especially as so many of them had reported his tweet on Michael Jackson’s death (“Never has one soared so high and yet dived so low. RIP Michael”). But the reason that so few did report it was because of course it wasn’t actually David Miliband posting tweets: it was a couple of graduates who wanted to parody politicians, but ended up showing how gullible, or lazy, many journalists are.

But before all us bloggers start proclaiming how this shows that ‘old media’ simply can’t keep up these days, it’s not just journalists that fall for this sort of thing. Last year, the blogosphere was united in its praise of Exxon Mobil and its use of Twitter to connect with consumers. Except, of course, for the fact that once again, it was a fake account.

This has now become such a common occurrence that any number of celebrities now call their profiles the ‘real’ one. But despite this, it’s often difficult to tell reality from parody, and if you’re a multi-million dollar brand, that could be a problem.

In his (typically biting) post on the Exxon example, Drama 2.0 (a now retired web 2.0 satirist) argued that companies shouldn’t worry unduly about this sort of thing. When a profile only has 500 foloowers (as the Exxon one did) on a very niche site (as Twitter still was at the time), then it’s unlikely to cause much damage. But now that tweets make the front pages of national newspapers, and the news broadcasts on major TV stations, things have changed.

The two pranksters responsible for the Miliband account said that it demonstrated the need for verification on the web. And minutes after reading about their hoax I noticed that the official 10 Downing Street profile now has a verified badge, to promote the fact that Twitter has certified the fact that it’s actually being run by those Gordon Brown’s communications team.

Unfortunately for brands though, Twitter has said that it’s not currently running the verification programme for businesses, though it is inviting companies to express an interest in the service. One would think that installing something similar to the system Google uses to verify business listings would do very nicely.

And in the meantime, brands will just have to keep listening for people talking about them in the hope that they can spot these hoaxes before they gain too much traction. And all of us who write about the web, whether blogger or journalist, will have to start doing some of that pesky fact-checking before we pronounce on the latest celeb or brand to say something scandalous on Twitter.