Everyone dreams of going viral. Think of the traffic! The links! The search signal boosts, the audience growth, the brand awareness! It’s true: going viral does wonders for both search and social. I’ve already written  about what makes content go viral, but we too rarely consider the who – the users who make content go […]

Everyone dreams of going viral. Think of the traffic! The links! The search signal boosts, the audience growth, the brand awareness!

It’s true: going viral does wonders for both search and social. I’ve already written  about what makes content go viral, but we too rarely consider the who – the users who make content go viral in the first place.

Every Virus Needs A Host

Just like a physical virus, viral content requires vectors: people who pass the viral content along and “infect” others. Yet even though the audience is essential for virality, we too often focus on just the content itself – what’s a catchy topic? What are the key elements of a viral video or post? How can we write/create/film something that will go viral?

Obviously, content is important: without something compelling, people would have no incentive to share anything you create. But amazing content idles without ever being seen by large audiences all the time. Even the pros can spend weeks or months laying the foundation for viral content only to have it flounder unnoticed upon publication.

Fact: there is no magic formula to make your content go viral. If anyone tells you differently, run. But there are definite factors that can increase your content’s chances for going viral. One of those factors is learning who best can move your content towards virality.

The 7 Social Technographics: Identifying Your Audience

In 2007, Charlene Li and Josh Bernoff released their Social Technographics: six (later changed to seven) levels of interaction on social media sites (keep in mind that a person can belong to several groups, not just one): 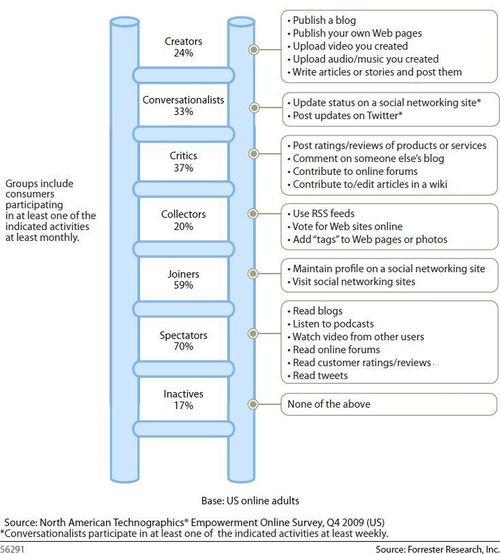 While all groups can be certainly be reached through viral content, certain groups are more instrumental in creating viral content than others. Here’s a basic breakdown of how each group can help your content gain shares and traction:

Know Your Audience, Know Your Community

Much like you would create a list of linkbuilding targets, you need a list of viral heavy-hitters: the people in your niche that wield the greatest influence. Think about popular bloggers, respected Twitter accounts, G+ users with a sizable follower list, etc. You should have some relationships with these influential users established already; if not, now’s the time to start.

Since these relationships are so essential in linkbuilding, you can start with your existing linkbuilding targets. You can also target people on SEOmoz’s linkerati list:

You may want to run some analytics on your competitors’ successes or your  own past viral content: who was influential in getting it to go viral? Which sharers achieved the most reach? Which Twitter users had the most RTs, which Facebook accounts garnered the most shares, which G+ users caused the most Ripples? These are all ideal users to target for viral outreach efforts.

Join The Conversation Before You Publish

Relationships take time. To increase your sharing potential when you publish your would-be viral content, you need to start your sharing reciprocity now. RT your targets’ links, comment on their blog posts, share their content on social networks. Join a relevant discussion or community before you publish your own findings.

Be sincere: you’re trying to join a community, not get a favor. The more you participate, the more you’re adding value to a discussion – and the more people will respect what you have to say on the topic in the future.

Get Feedback from Your Targets Ahead Of Time

In his How to Increase the Odds of Your Content Going Viral video, Rand Fishkin suggests sending out your content to your targets ahead of time. Ask their feedback. Ask if it’d be something their communities would be interested in. If you get plenty of positive responses, you know ahead of time that your content has a better shot of going viral.

If you get negative responses (or no responses), find out why by asking for their feedback. This gives you the opportunity to adjust your content before you hit the publish button.

Better still, it gives your targets a vested interest in your content. They’ve had an exclusive first look at your work, and they’ve been given an opportunity to give their opinions. They now have a personal reason to share your content with their respective communities.

Focus On Your Audience

To go viral, you’ve got to aim viral: which means that even if your target customer base aren’t 18-21 or 21-26-year-olds, you can craft content that shares well among all demographics. By reaching the Generation Y conversationalists and creators, you can reach the Generation X joiners and spectators.

Also, be mindful of your timing: if you’re aiming for personal Facebook users, you should know that most Facebook users share on Saturdays, but if you’re publishing for a business audience, midweek postings are ideal and weekend postings should be avoided. This infographic by Kissmetrics provides a great introduction to social media timing.

Finally, aim to make your content as timely and relevant as possible. If you’re releasing an infographic on the London Olympics, for example, you should release it as close to Opening Ceremony as possible; if you had content lined up about the recent health care debate, you should have posted it the week of June 24th when interest was highest, as this Google Trends report shows:

Being as timely and relevant as possible doesn’t just help your chances of going viral. It’s also a way to sweeten the deal for potential sharers looking to join a discussion or share something their communities are currently interested in.

It’s Your Community. It’s Your Responsibility To Find Out How It Works

I can’t tell you what you should do to guarantee your content will go viral. No one can.

But you can do research to discover what’s best for your community: which users have the most reach? When’s the best time to post? What types of content do the best within your niche? What sources bring the most click-throughs? These are the questions you need to start asking if you really want a shot at virality.