Mainstreaming Google Earth By Plugging It Into The Browser

Google Earth has always been a great product — and a popular one, downloaded more than 100 million times. Despite this volume it’s still not mainstream however. Microsoft Virtual Earth decided not to go with a big downloadable client and use a browser plug-in instead. This was a smart strategy to “mainstream” the Virtual Earth application and compete against Earth. Unfortunately Virtual Earth 3D runs too slowly on most computers. Now Google has followed Microsoft and made Earth available via the browser for Windows users.

It’s also available (like Maps) to be mashed up via the Google Maps API. 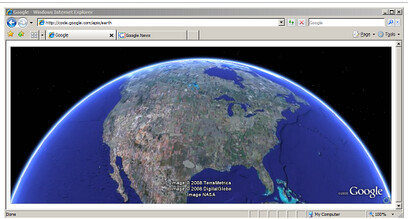 Making Google Earth available via the browser will expose it to millions more people and make its various functions and content more accessible to the broader Internet audience. Yet speed and performance will be critical to mass adoption. Accordingly it will be interesting to see how and whether it’s used by consumers for more ordinary, daily tasks and how the platform evolves as a result.