Irony & deja vu. Earlier this year, a rumor swept the internet that Jeff Goldblum had died — and for a short time, searches on Google seemed to confim it. Now the same is happening to Natalie Portman — who like Goldblum, is alive and well despite what Google’s search results say. Jeff Goldblum Is […]

Irony & deja vu. Earlier this year, a rumor swept the internet that Jeff Goldblum had died — and for a short time, searches on Google seemed to confim it. Now the same is happening to Natalie Portman — who like Goldblum, is alive and well despite what Google’s search results say.

Jeff Goldblum Is NOT Dead (Despite What Google Says) has the background on what happened with Goldblum and how a joke site called FakeAWish allows people make a story about any celebrity being dead in an accident (with one scenario placing this in New Zealand).

With Goldblum, Google News had picked up an actual news article that someone had written based on the rumor, making the rumor seem real: 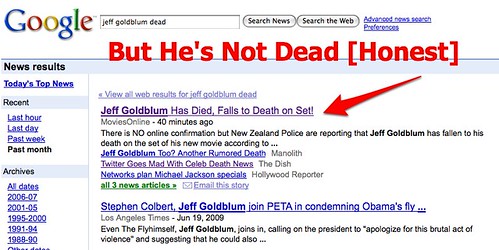 That’s a disadvantage to not having real time results. If Google had them, then at least people would have seen other people saying the rumor wasn’t true.

Then again, people searching for Natalie Portman right now on Google are seeing things like this: 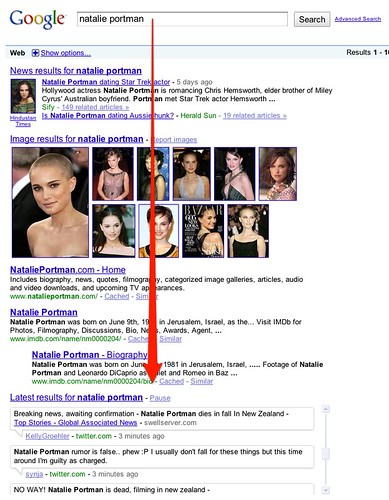 Now right below it, you see someone saying the rumor is false. In fact, I see plenty of that, such as in this example:

But it also depends on when you see them. If they aren’t scrolling with new stuff, you might get a “confirmation” without a rumor. And when the rumor first started, you might not have gotten confirmations at all.

I also continued to see glitches with the results similar to what I saw with reports of Brittany Murphy’s sadly real death (see Brittany Murphy’s Death & Google’s Real Time Search Results). Google’s real time results often did not refresh and usually failed to keep pace with new information that was showing in Twitter’s own real time results. And there was repetition, such as this: