Nearly two months after the forced roll-out of Enhanced Campaigns in AdWords, at least one key question remains unanswered: are we better off today than we were before? In my column this week, I’ll try to answer that question using some data-driven analysis — but first, I thought it would be fun to take a […] 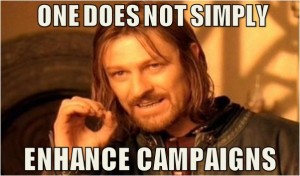 Nearly two months after the forced roll-out of Enhanced Campaigns in AdWords, at least one key question remains unanswered: are we better off today than we were before?

In my column this week, I’ll try to answer that question using some data-driven analysis — but first, I thought it would be fun to take a quick trip down memory lane….

Ever since Google announced Enhanced Campaigns back in February, search marketers have been moaning and groaning about the loss of control. Search marketing pundits were tripping over themselves making doomsday predictions about how Enhanced Campaigns were nothing more than a big conspiracy theory to drive up average cost per click (CPC).

The initial reaction to Enhanced Campaigns was pretty bad. Big search marketing companies were quick to make disastrous predictions. Like this one from Adobe that predicted CPCs would rise by 6%. Not to be outdone by Adobe, other vendors chimed in with their own studies, each predicting a more apocalyptic outcome than the last. Here’s one from The Search Agency claiming that Google CPCs rose a massive 21.2% from Q1 to Q2 2013. And here’s another from Covario that showed CPCs were up 7% in Q1 of this year. Thankfully, none of these apocalyptic scenarios played out. And we know this to be the case because Google actually reports on the change in average cost per click in their earnings call: CPCs were down 6% in Q2 2013. Okay, so “studies” and hilarious memes aside, one question remains: do Enhanced Campaigns work in an overall sense?

Now obviously, it depends. Some advertisers do great; others might do worse if they were relying on certain deprecated features. But on average, across a broader and more representative sample of clients representing the overall AdWords ecosystem, are we better off now than before?

If things were better, you might expect to see:

I looked at WordStream customer data to see what is really happening to performance since the mass upgrade to Enhanced Campaigns.

At WordStream, we work with over a thousand small, medium and large clients across different countries and industries — as a result, I believe our client portfolio is, on average, much more representative of a typical advertiser than other companies that might be more focused on certain high-spending verticals, like e-commerce advertisers.

The picture is much better than was predicted: In fact, as you can see, average click-through rate (CTR) has increased by around 10% since January of this year. That’s a huge increase. What could be driving these higher CTRs? I attribute this improvement to:

Better ad performance is good for everyone, so it makes sense that Google would implement changes that increase CTR.

Despite doomsday predictions calling for exploding CPC pricing, our view is that the CPC trend remains unchanged on a steady trajectory. In the past nine months, I’m seeing that average CPC has fallen 9%. While more advertisers are opted into mobile today, this upwards pressure on CPC could be mitigated by an increasing share of lower prices for mobile clicks driving the overall average down, or because ad inventory is increasing faster than demand, or increasing Quality Scores (which leads to lower CPCs), or other reasons.

What’s happening here is that I’m looking at an advertiser’s account activity to see how many changes (such as adding new keywords, campaigns, ads, etc.) the average account manager has logged in the last 30 days. I then turned this data into an “account activity index” by normalizing the absolute number of account changes based on the size of the account (since larger accounts are pre-disposed to doing more account optimization activity). Lo and behold, you can see that the trend over the last year is down by 16.9%. For example, it’s no longer a best practice to create a whole new campaign just to target mobile devices – you can now target mobile traffic with the same campaigns, just by adding mobile-targeted ads and adjusting your mobile bids.

Since I’ve calculated this as a moving average, I’d expect this metric to continue to improve over time. So, do enhanced campaigns work? If the goal was to create better ads in less time, then yes, I’d say they do. But I guess it’s more fun to make fun of stuff than to be positive/constructive.

Enhanced Campaigns and related mobile search areas represent a tremendous opportunity precisely because so many advertisers still (wrongly) have the opposite view.

We’re seeing amazing client results — for example, Colombo Hurd, a law firm that was recently featured on the Think Google Website, saw that calls were 3 times more likely to convert to clients vs. clicks to websites.

Instead of wasting time bitching about Google, use the new opportunity in mobile to re-engage with past customer prospects, or to drive improved ROI for existing clients. Over the past few months, we’ve signed up hundreds of new customers.

Wouldn’t you rather be a success story than a sob story?