The Mess That Is Google Shopping

One of the things Google promised by moving Google Shopping to the pay-to-play model for merchants was how much the experience was going to improve for shoppers. If that’s the case, I’m sure not seeing it. Come on a little tour. Amazon Don’t Play That Game The new system began on October 17. Perhaps the most striking change […] One of the things Google promised by moving Google Shopping to the pay-to-play model for merchants was how much the experience was going to improve for shoppers. If that’s the case, I’m sure not seeing it. Come on a little tour.

The new system began on October 17. Perhaps the most striking change by Google deciding that it would only list merchants if they pay to be included is the absence of a little known online retailer called Amazon. Nope, Amazon doesn’t want to play Google’s game, where it only gets included if it pays.

This type of absence is exactly why Google argued against the “paid inclusion” model for Google Shopping (or any type of search engine) back in 2004, saying:

Most online merchants are also automatically included in Froogle’s [now Google Shopping] index of shopping sites. Because we do not charge merchants for inclusion in Froogle, our users can browse product categories or conduct product searches with confidence that the results we provide are relevant and unbiased.

Searching For The Kindle Fire HD

What do you lose by not having Amazon? For one, the primary seller of the Kindle. Consider the situation for someone who decides to search for the Kindle Fire HD at Google Shopping. Yes, they do, otherwise Google wouldn’t have these suggestions based on search activity: 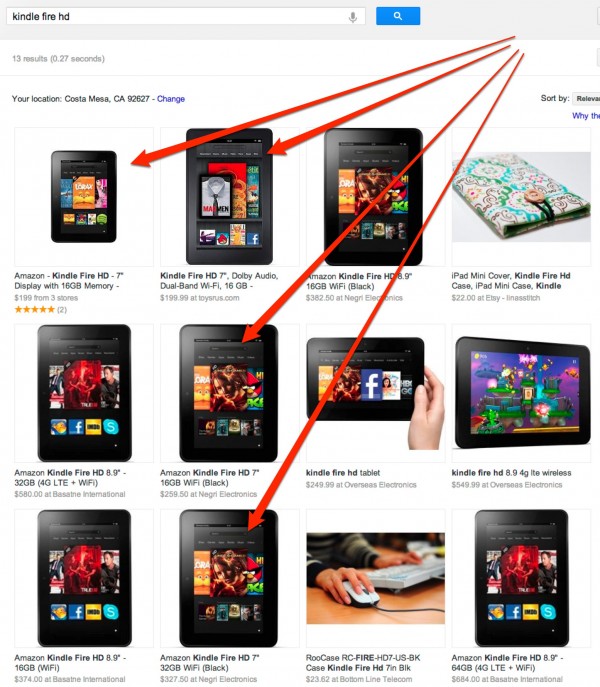 The arrows show how the Kindle Fire HD’s 7″ model is listed four different ways. Yes, one of the listings is for the 32GB model, and you could argue it should be separated from the base 16GB model. But that still leaves three separate product listings where one should be enough.

Clicking on the first listing brings up this: I get three merchants listed, as well as actual stores I can go into that may have it in stock, which is nice. What I don’t get is Amazon itself listed, which would be useful if Amazon did some type of special price drop (at $200, two of the three merchants listed above are matching Amazon’s price).

But remember those other listings for Kindle Fire HD? The second is for ToysRUs selling the exact same Kindle model, for $200, but for whatever reason isn’t being clustered in with the other merchants.

In fact, if you click on that listing, you have a jarring shift of not getting to the product page within Google Shopping for the Kindle Fire HD (where those other merchants are shown) but instead being expelled out directly to the ToysRUs site:

The same thing happens if you click on the two other listings pointed at above, both of which jump you out directly to Negri Electronics.

You might have noticed that on the Kindle Fire HD page, there was a note at the top saying it was “#5 in E-Book Readers.” Clicking on that link takes you to the E-Book Reader page at Google Shopping: As you can see, the Kindle Fire HD is indeed rated fifth, er, make that fourth. Well, what’s a little accuracy with the ratings when so much else isn’t accurate.

See that second arrow, telling you the number of stores it’s offered at, more than 25? That means more than 25 online stores (next to it is a separate count for “nearby stores”).

Let’s drill into the product page (you can click to enlarge this): You, Sir, Are No Kindle Fire HD

If I’m disappointed that I only got four online stores rather than more than 25, at least for some strange reason, navigating directly to the Kindle Fire HD product page produced an additional store that was not shown when I got to it by searching.

That’s what arrow #2 highlights, a listing from All4Cellular, promising the Kindle Fire HD for the low, low price of $150. Let’s click to learn more about this bargain: Hey, it’s better than yesterday when for whatever reason, 25 separate eBay listings for the Kindle Fire were being clustered into one of the Google Shopping pages. I can’t find that today. Maybe eBay has pulled its listings suddenly. But, there’s still plenty of mess left over.

The good news is that the first listing leads to a very nice Halo 4 page with plenty of merchants listed. The preorder listing in the screenshot above arguably shouldn’t get lumped into that. But the third Halo listing from QVC? This type of stuff should get caught.

Let’s try a search for “ipad mini” which brings up this: Why You Get “Apple” Listings & You Don’t The first arrow shows that there’s a listing from the Apple Store. Pretty cool, right? Apple itself is taking part in Google Shopping. Only, it’s not. That’s almost certainly an Apple affiliate, someone who gets a cut of any sales they send to Apple from web links.

I can tell this in two ways. First, if you click on the link, I can see “afid=” showing in the URL along with a string of numbers, which will help Apple identify the affiliate that sent it the business.

Also, look at the second arrow. Those are local stories near me selling the iPad Mini. What you don’t see are either of the two Apple stores only a few miles from my home (yeah, spoiled for Apple store choice, I am). They’re not showing up because Apple’s not paying to be listed.

Well, no matter, I suppose. It’s not like people turning to Google for comprehensive shopping information of local merchants should expect that. If there are enough other places showing, maybe they’ll be happy.

For Once, Google Loves Affiliates

Google just expanded a test to allow merchant affiliates to participate in Google Shopping. The test perhaps should have been called the “OMG what are we going to do” program, because it feels like Google needs this program to cover for the fact that Amazon (as the New York Times covered earlier this year), Apple and who knows how many others merchants are just saying no.

There’s a big dose of irony here, by the way. Over the years, Google’s not been particularly friendly to affiliates, in particular not wanting to reward them in its unpaid listings. That makes sense from a relevancy perspective. No one really wants a page full of listings that make you jump through hoops to get to a final destination.

Google can better police affiliates in the paid listing space, supposedly ensuring that only one (likely the one offering the best conversion, and thus the best to Google’s bottom line), shows. The welcome mat is very much being put out for affiliates with Google Shopping. It needs them.

A Gamble That’ll Probably Work, Relevancy Improvement Or Not

Of course, while Google’s taking a gamble here, having turned every product listing into a earning one means that even without some major retailers — and even if those retailers exercise their rights to ban affiliates from participating — Google still stands to make a load more money than Google Shopping did before.

Nor is Google doing anything different than its brethren in the shopping search space. They all charge for inclusion and long have.

In the end, what’s disappointing is when Google has tried to justify its complete turnabout on paid inclusion as a way to improve the quality of Google Shopping, from what I see, it still has all the same problems that it and other shopping search engines have suffered before.