About a year ago, Google dropped traffic estimates from Google Maps driving directions and now they are back in the form of “current traffic conditions.” 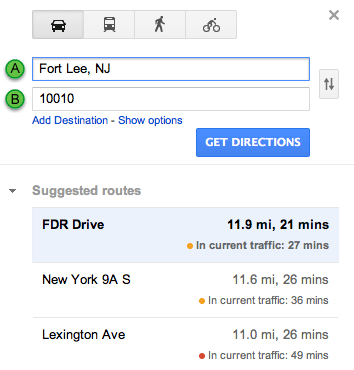 The old traffic estimates allowed you to change the time of your route so you can get traffic predictions based on any time of the day. Now Google seems to just show live traffic data.

It is unclear if Google is sourcing the traffic data from Android devices or third-party providers such as Inrix.

I have a question out to Google to clarify this and will update the story when we hear back.

Postscript: Google has posted their announcement a few hours after this story and sent me answers to my questions.

The previous traffic feature that was removed from Google Maps last summer provided users with the worst case traffic scenario based on historic traffic data — e.g. “up to 50 minutes in traffic.” That feature was removed because we wanted to improve the freshness of the data. The feature that we’re introducing on Google Maps today works differently and serves a different purpose. The new time-in-traffic feature provides users with the ability to check current traffic conditions and estimates the length of travel time based on constantly refreshed data.

The traffic information comes from a combination of data from third party sources and information that Android users have chosen to share by opting in to the My Location feature on Google Maps. While iPhone users don’t currently contribute to crowdsourced traffic data, we do provide the traffic data to both Android and iPhone map application users so they can benefit from the useful traffic information.