As the head of a search agency, I admit that I was somewhat bemused at first by this whole financial crisis we’re having. Don’t get me wrong; I don’t like seeing people suffer, and it hurts to see the impact that a slowing economy is having on many of my friends and neighbors. But as […]

As the head of a search agency, I admit that I was somewhat bemused at first by this whole financial crisis we’re having. Don’t get me wrong; I don’t like seeing people suffer, and it hurts to see the impact that a slowing economy is having on many of my friends and neighbors. But as a longtime critic of traditional media and promoter of Search, I couldn’t resist feeling a little smug knowing that traditional ad budgets were about to be cut and the move to online media accelerated as advertisers started focusing more heavily on ROI. Given that Search accounts for almost half of online media spending, that trend would be a good thing for Search and, selfishly, my company – right…? The big picture search trends aren’t going to change dramatically. More people will continue to search more often no matter what, so what could possibly go wrong?

Indeed, the big picture for Search isn’t likely to change much. Here’s the latest search query growth chart for the US (data from comScore): 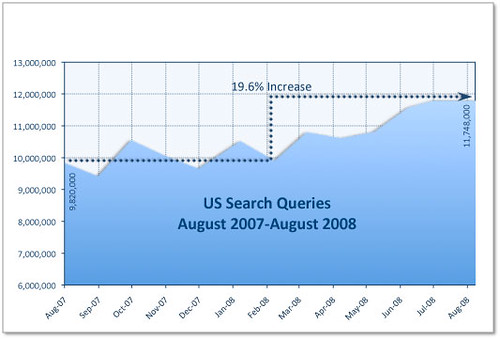 The forecasts may come down somewhat as a result of this downturn, but nobody I’ve heard thinks it’s going to turn negative.

This, along with all the usual points we make when making the business case for Search (measurability, control, ROI…), is partially why I felt so assured that Search would remain relatively unaffected by a recession.

When the economy sneezes…

Here’s the problem: while the overall search volume numbers are likely to keep climbing, the nature of those queries is likely to shift in response to macro behavioral trends. Here’s how it works: a barrage of news stories about global economic meltdown causes consumers to get nervous and rein in spending. They don’t shop as much, and even when they do, they buy fewer goods and/or shop less often. This doesn’t necessarily cause them to spend less time online (God forbid) or search any less. It just means they search for different things. So the number of purchase-related queries may decline while the number of information or entertainment-related queries increases. This, in a nutshell, is what I believe is happening right now.

As with most things, Gord Hotchkiss beat me to the punch on this topic. I encourage you to check out his summary of the psychological underpinnings of our society’s response to the current financial crisis a few months ago: Human Hardware: Risk vs Reward – Expressed Through Search (his Google Trends chart of “house plans” vs. “foreclosures” provides a brilliant visual synopsis of our current economic mood):

Everyone gets a cold

I got my first inkling that Search wasn’t immune from the economic slowdown while reviewing the SEM campaign performance one of our consumer e-commerce clients. This client only sells one thing – a very popular and heavily branded high-end technology gadget that people love. Sales from Search had increased nicely from when we took over their campaign, but then stalled somewhat dramatically in mid-September. We couldn’t figure out why at first. But a close examination revealed at least one reason: impressions had dropped by roughly 20% over the course of the month. Uh oh.

Why was I so unsettled by this? Because a) this data was for branded searches only, b) we’d consistently held top positions for all these terms, c) impression volume on these terms had been steady for months prior to this, and d) I knew there had been no other change to the campaigns themselves or in the offline advertising or promotional efforts that would explain the sudden drop-off in impressions. The only remaining explanation was that fewer people were searching for my client’s product. As search volume for branded keywords is a good proxy for demand, that meant consumer demand for my client’s product was on the decline.

That couldn’t be good. Then I checked out the conversion rate over the same timeframe:

What the…? On seeing this, my first reaction was that there must’ve been a site push or some other technical glitch with the site in mid-September that would account for the sudden drop in conversion. But after extensive investigation with the client and their web agency, we couldn’t find any internal reason for why this had happened. So I ultimately had to accept that this drop had been caused by external factors. Damn.

I’d been assuming that the economic news was partially to blame, but couldn’t believe it was solely responsible for a conversion drop of this magnitude. What the hell happened in the world over the weekend of Sep 13-14 that could explain this?

In retrospect, this should’ve been obvious to me. Aside from Search, one of my other hobbies is keeping up on economic news (I don’t get invited to a lot of parties). So I was well aware that Lehman Brothers had declared bankruptcy on Friday, Sep 12 – and that it was perceived that the Fed “let” Lehman fail, which was quite unnerving. I think that’s when the economic crisis really hit home for most Americans and investors, as indicated by this chart of the Dow Jones Industrial Average:

So economic uncertainty not only caused fewer people to search for my client’s product, it also caused those that did search to convert at a lower rate. Anecdotal evidence from a variety of sources indicates this trend is playing out across a number of e-commerce sites, where both traffic and conversion rates are down. Put simply, there are fewer shoppers and fewer of those shopping are buying. No wonder the forecasts are for this holiday season to be the worst in twenty years. Ouch.

Astute readers will notice that there was a gap between the Lehman bankruptcy on Sep 12 (a Friday) and the time that conversion started dropping on Sep 15 (a Monday). My explanation? Despite the media’s best efforts, not everyone is instantly aware of each news item. It still takes some time for even major news items to reach full saturation out there among the general public. And often longer for new information to be socialized and internalized to the point that would cause a change in behavior. So the fact that it took only two days for this news to be reflected in behavior patterns speaks to the powerful impact this announcement had. My sense is that people had been pushed to the edge by the steady drumbeat of negative economic news over the prior weeks. Lehman’s failure on Sep 12, then, was the straw that broke the camel’s back.

I really should’ve known better than to think that Search would keep powering along regardless of changes in the economy. But I let myself be blinded by my own self-interest, the same way so many homebuyers and speculators had convinced themselves that real estate values would continue rising forever. This is particularly egregious in my case because I usually try to approach every Web marketing problem by starting with the end user experience and working backward from there. But as they liked to say back in the dot-com boom, I was “drinking the Kool-Aid.” And it tasted so self-righteously delicious.

Here are the lessons I re-learned as a result of all this:

Search is a pull medium. If people stopped Searching, the search economy would crumble. Unlike, say, TV. Which continues to run and charge for ads even when nobody is watching.

Searchers are in charge. Search isn’t a passive activity. Every search impression involves an engaged user on the other end who is looking for something. Every question related to Search should be analyzed from the searcher perspective to see what we can discern about the searcher’s intent and context.

Searchers are people. And it is the actions of people that ultimately dictate the direction of the economy. Nothing in the world is immune from the combined actions of hundreds of millions of people, no matter how cool it is.

People are irrational (myself included). Fortunately, they are predictably irrational. Case in point: Very few people had less money on September 20 than they did on September 10. But the economic news caused them to think they might have less money in the future. And as we’ve learned, if people think they have less money to spend, they’ll spend less. So this series of events all followed a foreseeable pattern. Even if I couldn’t have predicted the degree of dropoff, I should’ve expected to see a decline. But I stubbornly thought we’d be able to optimize our way out of this problem.

Beware extreme conclusions. Search isn’t so strong that it’s impervious. And the economy isn’t so weak that it’s going to implode and have us all roaming the streets as cannibals.

Focus on the things you can control. Like ensuring you have well-structured and highly targeted campaigns, testing landing pages, improving conversion, and so on.

Search is a fantastic medium with a great future. Its usefulness and utility will ensure its continued growth. But its inherent value is ultimately determined by the people doing the searches, and not those of us managing the campaigns. All the statistics can obscure that simple fact sometimes.

Besides, it’s possible that the client example referenced above is an isolated incident. There are circumstances unique to their business that render them more risk-prone to a pullback in spending than the average company. It’s also possible we’ll eventually discover something that went wrong with the site that will explain the sudden drop in conversion. That would actually make me feel better. But I don’t think either of these possibilities is likely.

To be clear, I don’t think it’s safe to extrapolate from this example to draw conclusions about the degree of the overall economic slowdown or any single company’s financial performance during this time. I’m merely making the point that economic malaise -> consumer fear -> fewer searchers looking to buy -> fewer searches with purchase intent & lower conversion rates due to increased window shopping.

My intent with this article isn’t to scare anyone. I continue to believe that Search has a very strong future as a (the?) dominant advertising platform. I’m also sensitive to the notion that all the negative media coverage of the economy risks creating a negative feedback loop and further eroding confidence. Yet here I am in my first serious journalistic endeavor writing about recession.

So… don’t let this article keep you from believing and investing in Search, and certainly don’t let it keep you from buying stuff. In an attempt to lead by example and offset any economic damage this article may do, I’m going to remodel my kitchen – with a little help from Google, of course. So I’m off to get a home equity loan now. What could go wrong?