Why Wikileaks Will Never Be Closed Or Blocked

Last weekend, rather than read stories about the US diplomatic cables that Wikileaks has released, I decided to read them directly myself. In doing so, I better understood why no one — certainly not the US State Department — is going to shove those cables back into the darkness. Finding Wikileaks My first step was […]

Last weekend, rather than read stories about the US diplomatic cables that Wikileaks has released, I decided to read them directly myself. In doing so, I better understood why no one — certainly not the US State Department — is going to shove those cables back into the darkness.

My first step was to go to the Wikileaks site — which meant, as it does for many people, doing a Google search to find it. I discovered that Google wasn’t listing the site in its new location. Bing was, so I found it that way. The story below goes into more depth about that mess (Today, for me, Google STILL lists the non-functional Wikileaks.org site tops):

The story also explains that while finding the main Wikileaks site might be tough, it exists in many different locations.

When I arrived, there was no way to actually browse the cables.

(NOTE: There IS a way to browse them, as has been pointed out to me in the comments below. I’ll also explain this more, below. And good! I’m not sure how I missed this. It might be that when the site was moved, some of the sidebar elements weren’t there (for example, the page today no longer lists some of the graphical viewing material that it previously had, which was dropped when another US-based company cut ties with Wikileaks)

I followed to the main post, entitled “Cable Viewer,” which at the bottom of the page had a download link:

Selecting that download link causes a torrent file to be downloaded. Torrent files are especially known as a way for people to download movies and television content that’s being passed around on the internet. The content isn’t hosted in one central location. Instead, the data is all over the web, on personal computers and servers connected to the internet. If one computer isn’t available, another is that passes along the information.

I’d never downloaded a torrent file before. They can contain other data, as well, including text files.

When the download was done, I next had to download a torrent client that could read the torrent file and actually pull in the information to fill it out. It’s something that Wikileaks itself doesn’t explain, not even in its FAQ page. It’s something the site should explain. I used uTorrent, myself.

After that, uTorrent took only a few minutes to pull back the data. I ended up with a 2.2MB file that I didn’t know what to do with next. Again, here’s another failing of Wikileaks, that it hasn’t provided any basic information on what to do after getting the data.

The .7z extension to the file was unfamiliar to me. After a little searching, I realized that this was a form of data compression, like a ZIP file that is familiar to many people. I needed a .7z program to expand the files. I downloaded 7zX for that.

After the files were expanded, I ended up with a bunch of folders by year on my hard drive. Within each year were further folders by month. Within each month were the cables, text files that could be read: 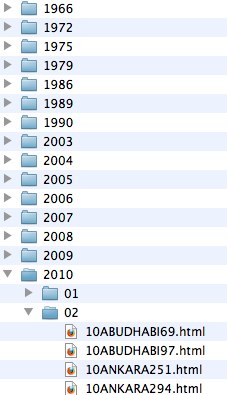 When I went back today, and I got the fresh torrent file and opened it, all the previous information looked to be there, plus some of the additional cables that have been released were included.

Now consider what the US State Department told (as TechCrunch reports) Julian Assange, who heads Wikileaks, back on November 28:

If you are genuinely interested in seeking to stop the damage from your actions, you should: 1) ensure WikiLeaks ceases publishing any and all such materials; 2) ensure WikiLeaks returns any and all classified U.S. Government material in its possession; and 3) remove and destroy all records of this material from WikiLeaks’ databases.

There are some things about Wikileaks that makes me happy (like more transparency) and some that give me concerns (like Assange’s insurance file that kind of feels like a blackmail attempt). But the State Department response is embarrassing. Return all the material? Remove and destroy all records?

That also means all this talk about blocking is somewhat wasted effort. It might make some anti-Wikileaks politicians feel good, as they spout their computer illiterate cures to an computer illiterate audience. It might also make Assange feel good, because when Amazon pulls support for his site, he’s able to further his aims of publicity (exactly as he intended, as you can read in this Guardian interview) even though having this information off Amazon isn’t stopping it from getting out at all.

In fact, a far bigger barrier than Amazon remains Wikileaks itself. By failing to expand these documents, and host them on its own web site, it makes them largely inaccessible to most people who have never used a torrent file, much less an 7z expansion program. If you want information to be free, you set it free in a widely used format. On the web, that means a web site with browsable web pages.

NOTE: As said above, Wikileaks does make these available, exactly as I want. Excellent, and my apologies for missing this. In case I’m not the only one who missed this, they’re over on the left-hand side of the page:

Reading The Cables, As They’re Released

If you are trying to keep up on the cables — the actual cables themselves — The Guardian seems to be one of the best English-language sources out there. Go here, and you can read each new cable as it is released, even before you might read about these in some news account. Indeed, these releases are a way how some newspapers that aren’t directly being given the cables are able to keep up.

You can also browse those cables by subject or take a feed of when they appear. The first arrow below points to the feed; the second points to subject headings: Unfortunately, while The Guardian promises a searchable database of these documents, that’s not really what it offers. There is one offered from another resource, but it is behind a few days from the latest cables that go out. The article below explains more about this:

The dissemination, of course, is also a weakness in the argument by Wikileaks that material has been redacted so that no individuals will be harmed. That’s true, if Wikileaks has redacted material perfectly. But if it makes a mistake, the documents that have been fired out upon the web can’t be retracted. You can put out fresh documents with some material edited out, but the old ones remain.

Debates rage, of course, on whether any individuals really have been harmed by these documents. That goes well beyond me. But what I do know is that these documents being out there are a fact of life, a reality that the US government isn’t going to correct. The proverbial horse is out of the stable. Shutting the doors now won’t help.