With automated tagging, Web links can surprise from the Associate Press reports that the Yahoo Shortcuts feature aided in placing inappropriate content on AP’s content.

Yahoo Shortcuts is a feature that allows publishers to enhance their content by adding Yahoo content around the words in the articles or blog posts. In this case, there was an AP story on the Eliot Spitzer scandal. Yahoo automatically took the phrase “underage girls,” which was used in the article, and highlighted it. If a user hovered their mouse over the words, up came images from Flickr – some containing underage girls drinking.

Here is a picture of how Yahoo Shortcuts may work on an AP article. As you can see, I hovered my mouse over the word “California” to be presented with this Yahoo Shortcut. 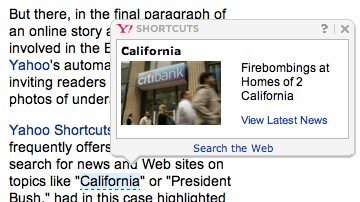 Yahoo told the AP that the phrase “underage girls” was “now added to a list of thousands of previously blocked terms, [and] will never again generate a Yahoo Shortcut.” Chris Sherman, the executive editor here, told the AP, “that raises the unsavory prospect that ‘underage girls’ could be among the most popular searches on Yahoo.”