Google Airs TV Ad During Super Bowl – But Why?

Perhaps yesterday’s tweet by Google CEO Eric Schmidt put it best. Hell has indeed frozen over. Google has run its first major television ad, during the Super Bowl, no less. Below, the ad, how it has been received, how it compares to other search engine commercials from rivals and some questions about why market leader […]

Perhaps yesterday’s tweet by Google CEO Eric Schmidt put it best. Hell has indeed frozen over. Google has run its first major television ad, during the Super Bowl, no less. Below, the ad, how it has been received, how it compares to other search engine commercials from rivals and some questions about why market leader Google felt it needed to make such a dramatic move to promote its best known product that has no real marketing problems.

The company also has a blog post up about it here, saying:

If you watched the Super Bowl this evening you’ll have seen a video from Google called “Parisian Love“. In fact you might have watched it before, because it’s been on YouTube for over three months. We didn’t set out to do a Super Bowl ad, or even a TV ad for search. Our goal was simply to create a series of short online videos about our products and our users, and how they interact. But we liked this video so much, and it’s had such a positive reaction on YouTube, that we decided to share it with a wider audience.

The commercial, by the way, had 1.2 million views before the ad. It’ll be interesting to see how it changes now. Google’s taken out its own ad on Google for google tv ad that links over to an area with the ad — good cross-promotion:

Someone also tweeted to me that Google’s also taken out ads for actual searches that are demonstrated in the commercial. I took a quick look myself. That’s true for some queries but not all of them.

The queries in the ad are shown below, along with whether Google was showing an ad for its Superbowl commercial in relation to these searches and whether the listing selected by the searcher in the ad is still in the top results:

Of those sites selected, one of them already doing something special for visitors who might be coming to it because of the Super Bowl publicity: 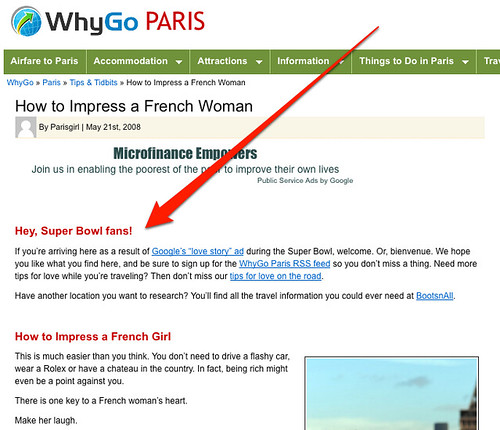 The ad was also posted to the YouTube AdBlitz channel, where all Super Bowl ads have been posted immediately after airing.

Over the past years, Google — which is somewhat notorious for not advertising itself to consumers, has actually been ramping up that outreach. Consider:

TV: In May 2009, Google ran TV ads for its Chrome browser, making use of remnant ad inventory available through non-major television broadcast channels (Google Does TV Ads, To Push Chrome Browser In Commercials). Google’s also been on TV via its sponsorship of Nova on PBS back in 2005.

Newspapers: Google’s done newspaper ads on the odd occasion, such as a campaign in 2005 to target college students and entice them to its web applications.

Outdoors / Billboards: Google has run billboard campaigns such as those to promote its GOOG-411 voice search service (Google Uses Outdoor Billboards To Promote Goog411) to promoting its web applications on billboards  in August 2009 (Google Kicks Off “Going Google” Ad Campaign). The company has also done other things such as bus wraps.

Despite these traditional advertising moves, nothing matches the giant leap that the Superbowl ad represents. Google has never felt the need to put across its core product — search — to so many people at once.

Indeed, when Microsoft undertook a major television campaign last year to promote its new Bing search engine, Google’s Schmidt suggested they would be of little use for acquire customers:

You don’t just buy it with ads. You earn it, and you earn it customer by customer, search by search , answer by answer. And we believe that today we beat our competitors because we’re so focused on comprehensiveness, speed, freshness and having the depth that people really care about.

At that time, Schmidt also said:

We are spending all of our time on exactly what we’ve always done, which is innovation. I don’t think Bing’s arrival has changed what we’re doing. We are about search, we’re about making things enormously successful by virtue of innovation.

Such a major flip from that to a Superbowl ad in less than a year suggests that Google is feeling pressure to reach consumers, something I suspected might happen back when Bing launched:

Google’s never really had to market itself to consumers, to trot its stuff. The recently held “Searchology” event didn’t cover anywhere near the range of what Google offers. But if the praise for Bing keeps largely rolling in — if people keep discovering features that aren’t necessarily unique to Bing — Google may find it has to step up.

Just a week after Bing’s launch, Google showed the first sign of outward pressure by pushing out a new “Explore Google Search” page that was advertised on its home page. It was to counter the idea that it was somehow missing features that Bing was getting noticed for (see Google Fires Back At Bing, Launches “Explore Google Search”).

Now we have the Super Bowl ad– a TV ad no less intrusive than those Google once said it hoped to change through its own Google TV Ads program for advertisers.

We also have it during the same Super Bowl where long-time advertiser Pepsi skipped the Super Bowl. What a strange, unexpected flip-flop.

Postscript: Like that simple focus on search results in Google’s ad? As I’ve been watching reaction on Twitter, plenty seem to: 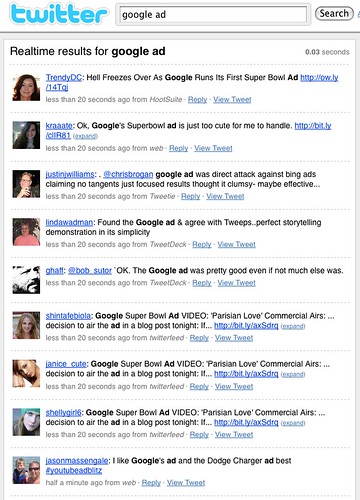 The format is similar to this one from Ask in 2007:

Of course, the Google ad has a common theme that evolves in the spot, a blossoming love affair told in searches, whereas the Ask ad just focuses quietly on Ask’s features. Still, having watched reactions to search engine ads over the years, I can recall that the Ask ad seemed effective to those I talked with about it. The Google ad may have struck the same chord.

In contrast, the Bing TV ads that have been running perhaps have been too overloaded focusing on the idea there is “search overload” rather than the simplicity of the results themselves. Here’s one:

Meanwhile, here’s a look back to 1998, which was a heyday for search engines to be advertising themselves on TV. This montage starts off with a Yahoo ad that always makes me laugh, just a boy, looking for some hair:

We’ve also got a parody of the Google ad, though this was made before the ad aired during the Super Bowl (that’s possible because the Google ad has aired online for several months). Spotted via Twitter, check out this Tiger Woods-themed ad:

We’ll see how reactions to the Google ad continue to go. Some media reactions to how Google’s spot compared to other Superbowl commercials that I’ve survey are giving the company kudos:

That’s impressive when you consider just how much goes into the creative for Super Bowl ads. Google’s is self-produced, to my knowledge. The ad, if deemed a Super Bowl hit, gives Google the ability to back up what it tells large brands and others in terms about speaking to consumers in ads. The purchase itself also positions Google as finally spending in the medium where it seeks to attract big advertisers from — even specifically with its push to get Super Bowl advertisers.

Elsewhere, professors at Michigan State University rated Google’s ad the best. So did students at the Kellogg School Of Management at Northwestern University.

Over at Forbes, the Google ad didn’t appear to be either a best or worse pick by Forbes judges. Forbes also has public ratings, but Google’s not listed — perhaps because it wasn’t known Google would be running an ad in advance. The same is true for voting at the Wall Street Journal. So downside to Google’s big mystery spot? It might have missed out on being counted among the best by being late. Google’s YouTube is also hosting a contest, with voting through the middle of this month. So’s Hulu, with results announced later this week.

SF Weekly also reports that Innerscope & Wired conducted a survey that measured emotional responses through electrodes attached to the skin. So far, Google’s ad beat the US Census ad. More results are still coming in.

Why Advertise Your Best Known Product?

It also remains odd to me that Google spent so much money to advertise itself in an area where it leads by so much, especially when Bing’s advertisements have made little real impact with consumers. And when Google, when asked about pushing its Nexus One phone, suggested that TV wasn’t a way to go over pushing through its online channels.

Compared to Google itself, practically no one uses the Nexus One. If any product needed some TV ads, you’d think that was it. I suppose that it’s difficult for Google to advertise Google itself to a “new” audience on Google’s own network. So, the Super Bowl ad does get it out to a broad audience. But was there anyone in that audience that didn’t already know Google? Were there seriously that many people who were thinking of not using it over Bing?

The Google ad to me comes off as a giant waste of money, something Google seems to have done to satisfy its own internal concerns that Bing is making a splash even if that splash hasn’t tipped market share at all. No doubt it is and will continue to generate buzz, of course. But was the buzz worth the cost? Not just the financial cost, but the cost of signaling to your chief competitor and those who closely track you in the search space that Bing makes you very, very nervous.