Bing new Bing Twitter Search has gone live today, made possible through a new deal cut with Twitter. Below, a close-up look at features in the new service.

“Bing Twitter Search” is my name for the new service. Bing tells me officially, it’s called “Bing Twitter.” That sounds awkward, two brands next to each other (as opposed to Bing Video or Bing Images, which combine the Bing brand with a generic term).

We also know that a Facebook deal has been approved, as announced today by Microsoft as part of the Bing-Twitter news. But the Facebook data hasn’t yet been implemented on Bing. Will there be a “Bing Facebook Search” service to come? Or is Bing Twitter likely to turn into “Bing Social Search” that combines Twitter and Facebook data?

Microsoft told me they don’t have anything to say on the Facebook front yet. Personally, I’m expecting we will see a Bing Social Search that combines Twitter and Facebook together, if only because today’s blog post from Bing about the new Twitter service is signed by the “Bing Social Search Team.”

Our What Is Real Time Search? Definitions & Players article from earlier this year take a long look at this issue, and I recommend reading it to understand Bing Twitter Search better.

Bing is trying to do both. When you do a search, you’ll get tweets at the top of the page and shared links at the bottom: 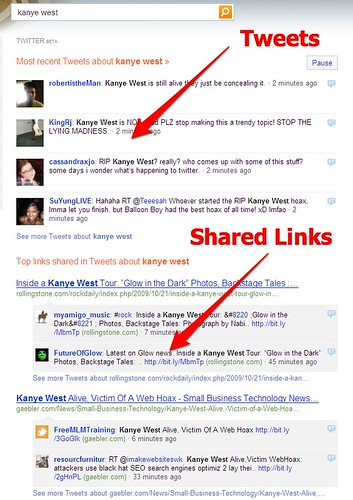 How Fresh Are Your Tweets?

Let’s focus first on the tweets that Bing brings back and shows at the top of the page. Below, a look for a search on kanye west, a popular topic at the moment over rumors he’s died: 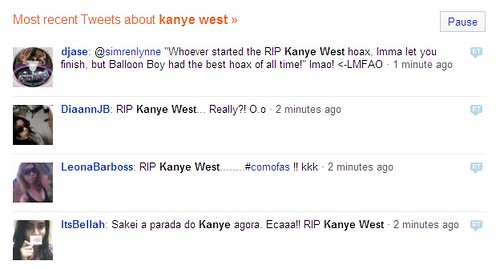 Notice the times. When I snapped this, the latest tweet was 1 minute old, followed by three that were 2 minutes old. But over at Twitter Search: 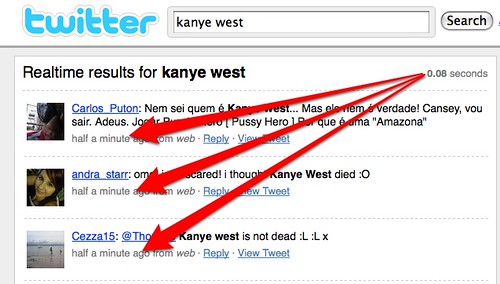 The top three results are only half a minute old. So, Bing’s missing a lot of tweets. But it’s supposed to have the Twitter “firehose” of everything that happens on Twitter virtually as it happens, so what’s up?

Microsoft’s Sean Suchter, General Manager, Search Technology Center, says his company takes the blame. Right now, all tweets are indeed coming into Bing in real time. But then Bing is trying to remove duplicates, filter out adult content and do some other processing. That’s resulting in the delay, but Bing hopes to improve this going forward. It’s a beta, he reminded — and fair enough, especially a beta in its first day.

In the main results, tweets are sorted by date. The most recent tweet shows at the top, and new tweets push that down. That’s how Twitter Search also ranks things, and it’s a spam magnet (see Twitter’s Real Time Spam Problem).

We’ll see if Microsoft changes this order going forward. As said, they do some filtering beyond what Twitter already does. But when you “drill down” into search results, that’s where they hope the results are even more filtered by quality, popularity & usefulness. Let’s look.

Notice the “more tweets” link below: 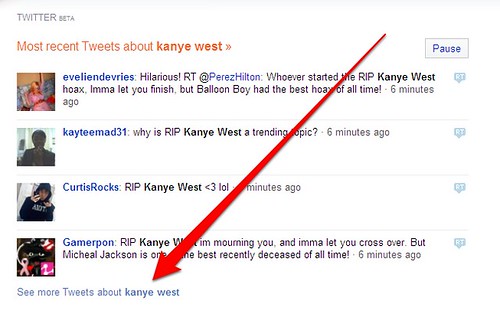 This link appears below the “tweet” search results for any search you do on Bing Twitter Search. When you click on it, you can drill further into the results (in contrast, if you were to keep scrolling down on your original search page, you’d see the “Shared Links” section.

Drilling into the results shows you more tweets, sorted by time: 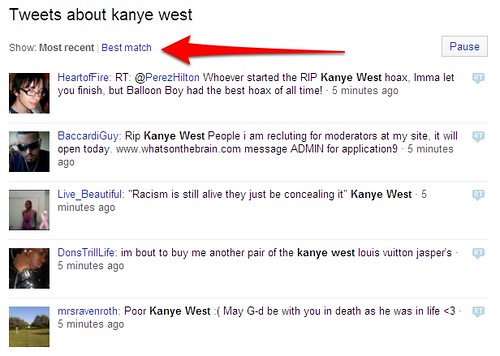 See the arrow? It’s pointing at the two options you have, “Most recent” sort or “Best match” sort. By default, Most Recent is selected.

Suchter said that when you drill into results, filtering goes way up. Bing may try to drop up to 90% of retweets, for example, so that there’s variety in the results rather than everyone saying the same thing over and over. 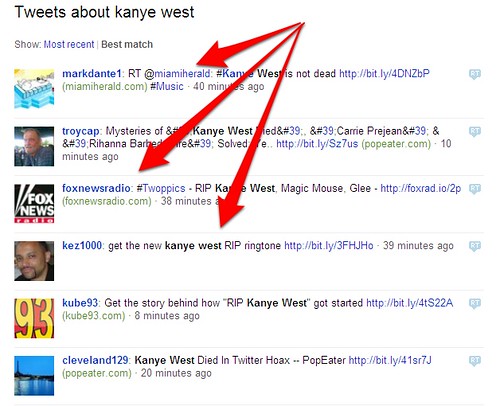 Potentially, this should be awesome. But there are problems, as the arrows will highlight. First, though, the ideal world. There are plenty of times when you want “authoritative” tweets, and that’s what Bing promises here:

On that page, you can change the ordering to “Best Match.” Here we arrange Tweets differently. If someone has a lot of followers, his/her Tweet may get ranked higher. If a tweet is exactly the same as other Tweets, it will get ranked lower. For example, I saw a Tweet from ABC News ranked pretty high in the Best Match mode during the “boy in the balloon” fiasco. By the way, you won’t see any of your tweets if you protected or deleted them, and tweets don’t last more than 7 days in our index.

In particular, Suchter said that each tweet’s ranking is influenced by things such as:

Now in the search above, what would be authoritative in a Kanye West search? To me, a tweet that makes it clear it’s not true, so we don’t get a repeat of the Jeff Goldblum death rumor (he’s still not dead, either). And look at the screenshot. The first tweet I point at shows the Miami Herald saying he’s not dead. Good job!

Suchter said the Miami Herald probably should be up there, and that this is something his team is looking at. It’s a beta, remember?

Look at the third link. Bing really, really falls down hard here. This is misleading spam, someone trying to cash in on the popularity of the search promising a Kanye “RIP” ringtone, whatever that might be.

Now you were to click on that link, Bit.ly itself would stop you with this scary warning:

Nice that Bit.ly does that — but why didn’t Bing do that for you first? After all, a big part of Bing’s announcement today — which drew applause from the audience listening at the Web 2.0 Summit — was that it would open all shortened URLs (those from bit.ly or other URL shortening services) bit.ly URLs, as you can see in the example below:

That wasn’t happening in the Kanye West search. Suchter put it down to a glitch that his team would be investigating.

Remember I mentioned that when you do a search on Bing, the bottom of the page is devoted to a “Shared Links” section. Here’s a close-up: 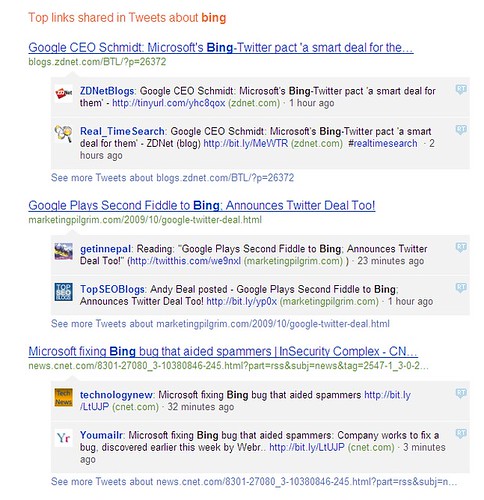 The goal here is to show you the hot and popular links that are being tweeted on your search topic. Showing top links isn’t unique. Many any other services do this, as described in my What Is Real Time Search? Definitions & Players post. However, none of those players, to my knowledge, get the fast “firehose” of data that Twitter provides.

How’s the ranking done? Each link is evaluated according to a variety of factors, such as:

Microsoft is also following the links and indexing the content of the pages. In addition, it also understands the “main” or “real” or “originating” URL even if different URL shorteners are used. Notice below how the same link from ZDnet is associated in a cluster where two different shortened URLs are used to reference it:

Notice also that for any popular URL, you see up to two people who have tweeted it. Which two? Again, accounts that are deemed relevant based on their authority, people who are retweeting them, freshness and other factors.

For any popular URL, you can drill down to learn even more about it — again, something that’s not unique to Bing’s service, but it’s still pretty cool. Click on the “more tweets” link for any URL:

Then you’ll get a full view of tweets related to that URL. By default, these are sorted in time order (I’m using a different drill down example than the screenshot above, but you should get the point. I had to go with a different page because for some reason, sometimes the drilldown doesn’t work on Bing Twitter Search): 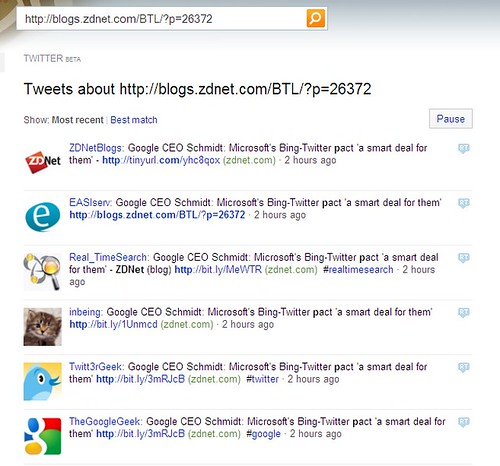 However, you can do the “Best Match” resort. In this case, here’s Best Matches for this article you’re reading now: 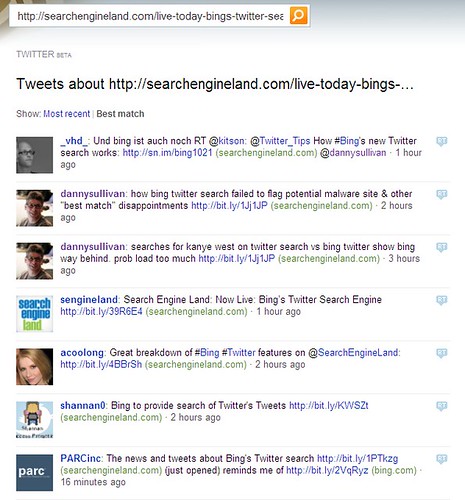 Again, factors include followers, how much your retweeted and how recent the tweet is. Notice that my tweets are older than the person who’s top listed.

Want a warp speed way to find out what people are tweeting about your pages? Just copy and paste your page’s URL into the Bing Twitter Search query box. Your page should be listed in the top links section, and then you can drill down to see recent tweets or best match ones.

You don’t have to search to use Bing Twitter Search. When you arrive at the home page, you’ll see a tag cloud of popular topics: 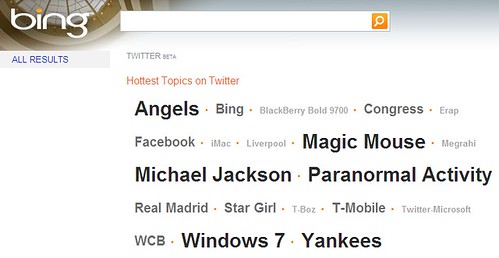 You can click on any of these to drill down into popular topics. About the only downside to this is listing those topics on Twitter Search itself has driven up spam, people who will tweet misleading information about subjects. It’ll be interesting to see if Bing manages to stamp down on the spam within its own search results.

Below the tag cloud, you’ll see hot links being shared across Bing overall: 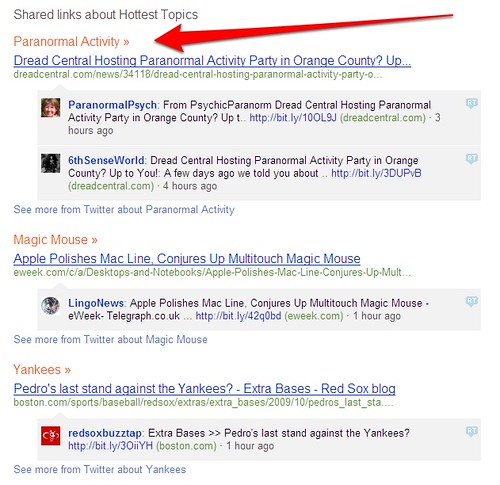 The red arrow in the screenshot above points to how each subject has a heading, and by clicking on the heading, you can get even more info on that topic.

Finally, when you do a search, by default new tweets will flow in automatically into the tweets section of results. You can also use the pause button to stop this: 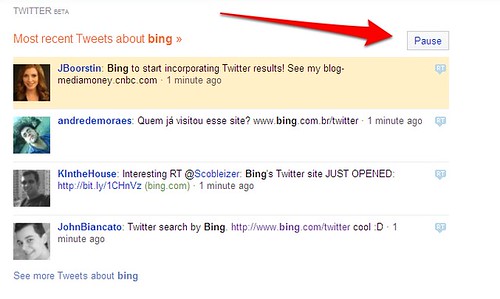 For more, see Bing’s post about the launch and related discussion on Techmeme here.