Tomorrow is widely anticipated to be the day when T-Mobile announces availability of the first Android phone. The phone is reportedly an HTC “Dream,” which will apparently sell for $199 with a two year contract. Many believe the handset will resemble a Sidekick. It’s fitting in a way that a Sidekick-like device should be the […]

Tomorrow is widely anticipated to be the day when T-Mobile announces availability of the first Android phone. The phone is reportedly an HTC “Dream,” which will apparently sell for $199 with a two year contract. Many believe the handset will resemble a Sidekick. It’s fitting in a way that a Sidekick-like device should be the first Android phone. Android co-founder Andy Rubin was the one-time CEO of Danger, which made the Sidekick for T-Mobile.

On the eve of the announcement, it’s also fitting that Rubin, now director of mobile platforms at Google, broadly weighs in on the future of mobile.

It’s now almost a cliche to call mobile phones the most personal piece of technology. And it’s equally simplistic to point out that there are many times the number of mobile handsets around the globe as PCs — more than three billion.

Yet these facts are what have motivated Google — offensively and defensively — to invest so heavily in mobile; it represents a font of future search queries that may eventually exceed those from the traditional internet. But that’s the 30,000 foot view. Once we come down to Earth the issues become more varied and complex.

Mobile Internet adoption is growing dramatically in the US and around the world. According to Nielsen Mobile, the US is now the country with the greatest mobile internet usage: 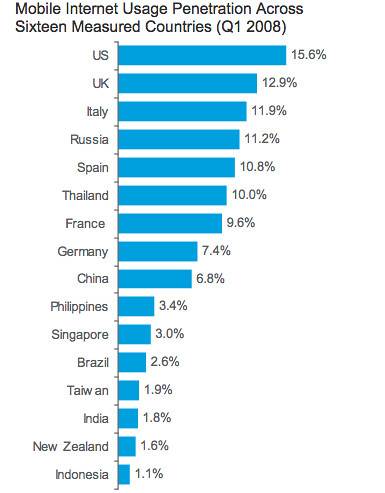 There are higher penetration figures in the market as well. Indeed, the US mobile internet audience is roughly 25 percent the size of the desktop internet today. However the mobile internet is a more elusive and complex beast. The fact that most people in the US have conventional “feature phones” and don’t have data plans represent barriers to adoption. Despite this, the mobile internet adoption is growing fast and so is search on mobile devices. (Advertising will generally lag consumer adoption in mobile, however, as it did online.)

More than any other single event the launch of the iPhone last year catalyzed the mobile market, which had been in state of sleepy evolution for years. But the Apple device kicked everyone in the rear and kicked the market into high gear. We can effectively date the mobile internet like this: “BI” and “AI” (before iPhone, after iPhone).

Every handset OEM, from BlackBerry to LG and Nokia, has been motivated to respond with improved devices and user experiences. The iPhone and corresponding mobile internet adoption have also helped open US carriers’ eyes to the potential data revenues from mobile internet access. (According to CTIA mobile data revenues are now 20 percent of total US wireless carrier revenues.) 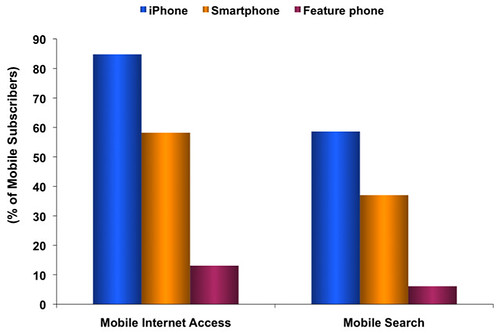 The iPhone is like the “proof of concept device” for the mobile internet. And it is the device to which the first Android phone will inevitably be compared by everyone. Google has seen its mobile fortunes rise with the iPhone. But the iPhone has tiny market share and is limited to AT&T subscribers, although there are 70+ million of them in the US.

Android is, in some respects, the anti-iPhone. Like the iPhone it seeks to provide a better user experience but also features a totally open platform unlike the highly controlled Apple device. At a conference last week, I had a mobile company executive tell me, “Steve Jobs re-wrote our press release.” That can be seen as a metaphor for the tight controls that Apple imposes on developers and the entire process of launching iPhone applications.

The Android software ecosystem promises to be more freewheeling and more uneven as a result. But Google hopes that Android phones will make a strong, positive impression. Google’s Rubin has publicly fretted that Android won’t get a second chance to make a first impression, as the old shampoo commercial argues.

An Apple executive I had lunch with recently wondered if Google’s method of releasing betas and then “iterating over them” would work with Android. Rubin’s public comments suggest that Google isn’t taking that approach with Android. The stakes are too high.

If the first Android phones are a hit and favorably received, you can expect that other OEMs and carriers will quickly fall in line. Right now there’s likely a wait-and-see attitude.

The objective of Android — as with Google’s participation in the US government spectrum auction earlier this year — is to move the entire mobile industry forward by opening it up. If Google succeeds, on the shoulders of the iPhone’s early success, it will benefit consumers and, ultimately, Google.

As stated above, mobile query volumes are almost certain to outstrip the conventional internet. The only question is how long will that take. Nielsen says that US mobile search users average nine queries per month on Google. In research recently conducted by the program I run at Local Mobile Search, we found mobile search frequency numbers that were much higher: 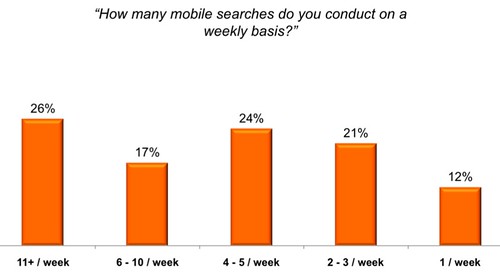 While Google isn’t calling the first Android phone a “GPhone” or “Google Phone,” T-Mobile is expected to push the association with Google to help drive sales. Google has a stronger brand than phone maker HTC or T-Mobile itself. So we may get a “Google Phone” after all.

The irony here is that Google doesn’t require bundling of its services or the promotion of its brand in connection with Android. An OEM or carrier can make an Android phone entirely without Google’s products or brand anywhere in evidence. Google is confident that its brand strength and consumer affinity will translate into mobile success — even without Android. It already has. comScore/M:Metrics data show Google with a mobile search lead akin to its desktop market share around the world: 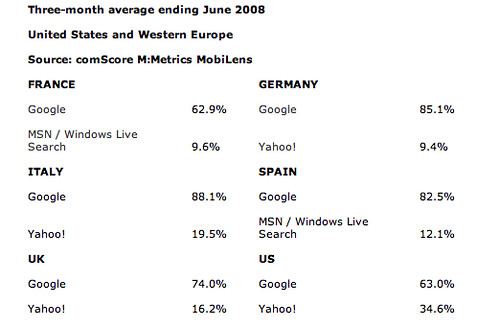 While search won’t necessarily play the identical role in mobile it does online, it will still be a prominent part of the mobile internet experience. You can bet Google is banking on that.