For those of you expecting me to make good on a promise from my last column to continue the theme of how mobile is changing SEO with regard to link building, look for that next month. Since Google’s Inside Search event had a mobile theme, I think it’s more important to address the implications of […]

For those of you expecting me to make good on a promise from my last column to continue the theme of how mobile is changing SEO with regard to link building, look for that next month. Since Google’s Inside Search event had a mobile theme, I think it’s more important to address the implications of what was said this month.

If you’re not already aware, on Tuesday, June 14, 2011, Google held an Inside Search event in which they introduced several new features to desktop search, including voice search and search by image, released several new mobile features, and gave general statistics on mobile search usage and growth.

From this event there are three basic takeaways for SEOs: 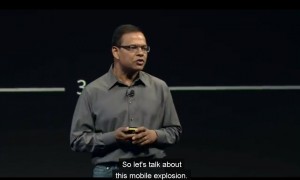 You might not know it if you listened to Google Webmaster Tools analyst John Mueller talk about using canonical tags for your smartphone site last week, or if you’ve used Google mobile search at all on a smartphone and had to waste precious time pinching and zooming your way to the knowledge that you seek. But according to search quality head Amit Singhal, Google is hyper-focused on getting that first mobile search result right.

In describing Google’s initial success with mobile, Singhal focused on three things that are essential for the mobile search user experience: relevance, simplicity and speed:

There is, of course, relevance, that I talked about. Google’s relevance algorithms power the top results that are ever so more critical on mobile. And you add to that the simplicity of Google’s interface, a simple front page and very simple understandable result page. On a mobile device where you have to touch things, this simplicity has become even more critical than ever before. And you know that at Google, we are obsessed with speed. At Google, we often say “speed is still the killer app.” And on mobile devices where the networks are still somewhat slow this focus on speed becomes the third pillar of our successful foundation for mobile.”

Unfortunately for Google, their smartphone search results at present often suffer from a lack of relevance, simplicity and speed.

When I looked recently at above the fold results for a random sampling of 11 popular queries in a number of different industries and with different intents, 63.64% scored a zero (100% being the best possible score) on the mobileOK test, which is the w3c’s standard for mobile usability (including simplicity and speed).

When it comes to relevance, 60% of the listings did not redirect to mobile content or reformat content for a mobile user, even though the query came from a mobile user agent, and Google believes that simple formatting, speedy pages and relevance are critical for mobile success.

What this means for webmasters is that you can continue to provide a desktop user experience to smartphone users that will frustrate them for being anything but relevant, fast or simple, and at present, it will not prevent you from ranking highly in Google smartphone search. It doesn’t mean that will last forever, especially since it’s clear from the event that Google intends to be competitive in mobile search going forward.

If the webmaster community has learned anything from Panda, I hope it’s the lesson that Matt Cutts teaches in this Google Webmaster Tools video from earlier this year, “Where is Google Heading in the Future?“.

This should be your mantra when you think about SEO for mobile users these days, as many current best practices for mobile SEO don’t help that much in smartphone search results, but Google’s search quality head believes that relevance, speed and simplicity are critical for mobile users, and studies have shown that smartphone users prefer mobile sites that load quickly and are easy to use.

Google may not be there yet, exactly, but Amit Singhal clearly showed that is where they’re headed Tuesday. If long-term traffic from search matters to you, you should head that way as well. When it comes to content intended for mobile users, think relevance, simplicity and speed.

I had speculated in the past that mobile may have been a major factor in Google’s mission to “speed up the web”, but the Inside Search event was the first time I’ve seen direct evidence that mobile searchers are changing desktop search.

In my last column, I showed how mobile searchers are changing keyword research by using images with Goggles instead of textual queries, and now with Google’s new search by image, desktop users can use the same technology to find more about images on their desktop computers. Likewise, desktop users can search hands-free with Voice Search for Desktop. The idea behind this is ubiquity, or the principle of being on every platform and device.

According to Google, it helps users because it allows them to not have to wonder if a feature is available on one platform or another before they use it.

It makes things complicated for search marketers, however, because it means that a user isn’t necessarily going to type a query into a search box on desktop, which has the potential to change how we do keyword research, not just for users on mobile devices, but for all of them.

If you’re not yet thinking about optimizing for image searches, the ubiquity of search by image makes that more of a priority for you.

If you’re not yet thinking about how voice search can affect search behavior, now is the time to consider it.

Check out “Google Search by Voice: A Case Study” for Google’s thoughts on how to best serve a user who chooses to search with her voice.

Since I’m an Android user and the search box is on the home screen, I never navigate to the Google home page in order to search.

For me, Google’s decision to add large icons representing common mobile needs won’t change the way that I search, but it’s important for marketers for two reasons: To the first point, if you’ve used Google Places on your smartphone before, these categories won’t be new to you, but it does serve to reinforce that Google sees most of their mobile users trying to find things around them.

If you represent a restaurant, a coffee house, a bar, a fast food joint, a shop, a bank or ATM, gas stations, or other local attraction, and you still have an all Flash site with an image for a phone number, you are clearly missing out on mobile users who want to buy from you.

As Google’s mobile ads team put it in a webinar last month, for a business to not have a mobile site to engage the 15-30% of Google queries that are mobile is like “not engaging with your customers on a Thursday—literally like having your doors closed.”

If you represent a business that is actively engaging with mobile users, pay attention to the keywords that Google sends these mobile users to, as they already have high search volume, and will likely grow with this prominence on the Google mobile home page.

In fact, the keywords restaurants, coffee and bars that Google represents on the mobile home page are the keywords with the highest search volume of all categories represented, and were likely not accidental choices for the home page.

Now that they are on the home page, those keywords will likely see steady growth, as a recent study on Google doodles have shown prominently displayed home page features spike query volume on the queries they represent.

If you represent a local business, these eight queries can help you reach more of who is looking for you.

These days, it seems that I could spend all day commenting on mobile search events and innovations and nothing else.

However, unless there’s another game changer in mobile next month, I will be spending my next column talking about how and why, contrary to what you might have heard, link building matters in mobile search.