If you visit Ask.com today, you will see what looks like a huge ad, in form of what is called (I believe) a skin ad, engulfing the home page. The ad, at least to me, shows a sign of desperation for Ask.com to raise ad dollars. While Google would rarely ever show an ad, even […]

If you visit Ask.com today, you will see what looks like a huge ad, in form of what is called (I believe) a skin ad, engulfing the home page. The ad, at least to me, shows a sign of desperation for Ask.com to raise ad dollars. While Google would rarely ever show an ad, even a text ad, for a third-party on their home page, Ask.com makes a full page ad. At the same time, the ad is cool in that many of the mouse hovers lead to search results, with Ask.com’s Smart Answers, similar to how Live.com does hotspots.

Here is a picture: 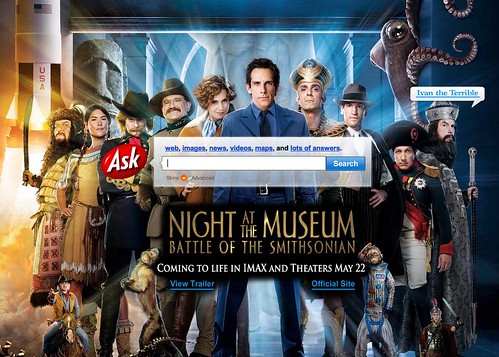 I am curious on your take. Do you like these types of ads or do you think this shows signs of weakness from Ask.com?

Ask is running a unique, two-day homepage takeover with FOX studios to promote the new blockbuster family film – “Night at the Museum 2” (the first movie got almost $575 mm in WW box office sales). Contrary to what has been written about this feature – it is not an ad. It’s much more – it’s a partnership between Ask and FOX. It’s ‘infotainment’. It’s a product integration project. Ask.com is actually featured in the movie itself, and we in turn are featuring the movie (and trailer) on the Ask homepage in a visually robust and media-rich format..

Ask is doing this for several reasons. First, we know our users love a homepage that is not just ‘white space’, but offers something more interesting and compelling. Second, NM2 is also a movie about historical characters and learning – and aligns with Ask’s focus on content that is of great interest to families and kids – and fun, too. Third, the homepage is not static – it comes alive in a “rollover” or “hotspot” format when you mouse over the movie’s historical icons and legends – like Amelia Earhart, General Custer and Sacagawea, and allows user to experience Ask’s robust search results through our proprietary “Smart Answers” offering. (When you click on a character, you get Ask’s Smart Answer on said historical icon). In that sense, the homepage takeover is actually an introduction to the Ask search experience – to online discovery and exploration – and in no way detracts from, or inhibits, the usual Ask search process.

Fourth, its not the first time we’ve done this: in 2008, Ask did a promo for the James Bond movie “Quantum of Solace”, that allows users to get a special ‘skin’ that can replace their homepage. Very popular. We also have used the homepage takeover experience to promote important non-profit causes and introduce our users to the greater good that can come from the search experience; that took place when we had a partnership late last year for “Free the Children”, and again in April for Autism Awareness month with “Autism Speaks” – both incredibly successful in terms of interest, feedback, and click-thrus. From time to time, we also feature a ‘peel’ in the upper left-hand corner of the homepage to bring a unique offering (and deals!) from a partner to the attention of our users – as we did in February with a major florist for Valentines Day.

It’s also useful to note that Ask – like many other search engines – has used homepages to celebrate national (and international) holidays – and to promote awareness of how to help victims of a major disaster, such as we did last June when we used the Ask homepage to help educate users about the quake news and relief efforts. In addition, when we launched our partnership with NASCAR early this year, we had a NASCAR-themed homepage for a week – and then converted that to a ‘skin’ that is a choice for consumers to use to this day. And they do.

More than anything, we know that allowing users to see and experience something other than a ‘usual’ homepage excites and captivates them, which is why our ‘skins’ feature is so popular and desired. It also creates strong ‘lifetime value’ in users, which is such a critical part of brand presence and growing our share of market. And also adds to positive trends in frequency and retention.

Finally, if online companies don’t evolve smartly to give users new and compelling features, and also keep in-line with major cultural events and causes, then they themselves run the real risk of actually becoming a museum piece in the Smithsonian – instead of simply featuring it to the excitement of their users on their homepage or portal.