New to AdWords? Feeling intimidated? In this helpful how-to, columnist Dianna Huff explains how to start small with AdWords so that you can be successful, even if you've never done a paid search campaign before. In my 17 years as a B2B SEO and marketing consultant, I hadn’t really considered giving PPC a go until Google changed the layout for its search results to remove right-side ads on desktop and to increase the number of ads appearing above the organic results to as many as four.

Suddenly, SEO became a whole different ball game, especially since I work with small manufacturers, many of whom are SEO-challenged to begin with. Seeing the lower CTRs and my clients’ listings being pushed farther and farther down on the page, I realized it was time for me to learn AdWords so that I could offer it as a new service.

Thankfully, one of my manufacturing clients wanted to begin a small AdWords campaign, so we agreed I’d set it up and manage it — with the understanding that I was in “beta.”

Although I brought considerable skills to the table, including direct response copywriting, years of analytics and a deep knowledge of SEO and online marketing, I still found myself making mistakes and having to spend time researching to figure things out.

AdWords, I discovered, has a steep learning curve — and if I was struggling, I could only imagine what small business owners must be going through.

What follows are some of the things I learned — from an AdWords newbie perspective — that you can use if you’re considering an AdWords campaign for your small manufacturing business.

It’s much more difficult, however, to make your campaign effective. AdWords has an incredible number of moving pieces. You have the Search and Display networks, remarketing, plus all the add-ons: extensions, dynamic insertion, bid adjustments by device and so on.

It really helps, therefore, to take the time before opening your account to read through Google’s documentation. That way, you can decide where you want to place your focus — and your budget.

Google does a nice job of explaining exactly how AdWords works. I advise taking at least a week or two to read through the Setup and Basics guides — and be sure to watch the videos, as they’re quite helpful. Do this learning in small chunks of time so that you retain what you read.

TIP: Once you’re ready to open your account, work through the setup process, which includes creating an ad, then put your now live campaign on pause until you’ve completed your strategy (Tip #2).

Figure 1: AdWords interface (all those tabs!)

A PPC colleague recommended I spend my time inside the AdWords interface first, especially since my campaign was so small, and ignore the Editor for the time being.

By walking myself through all the tabs, I was able to piece out the simple the strategy I’d be using for the client. This strategy included:

Figure 2: Example of ad with sitelinks

Search Engine Land columnist Pauline Jakober has a great article, Sitelinks: The Swiss Army Knife of PPC, which I highly recommend you read. Without this information, I would have made a lot more errors.

TIP: Write your strategy out, then refer back to it as you set up your campaign. I recommend you block out a couple of hours of uninterrupted time. That way, you’ll make fewer mistakes.

Because my client provides a custom service and works with companies across dozens of industries, figuring out who to target and how, and which keywords to use, was the most difficult part of figuring out how to make the campaign more effective.

Following Google’s advice, I initially set up the campaign using broad match — and very quickly realized that uh-oh, Houston, we have a problem. Yep, the ads got lots of clicks, but the search terms weren’t at all relevant to my client’s offerings.

At first, I added many of these queries to the Negative Keywords tab In the AdWords interface — but I could see this wasn’t the most effective solution. I also learned, thanks to Pauline again, that I didn’t have to use quite so many keywords (I had followed Google’s advice), so I cut those back as well.

To solve the non-relevant keywords problem, I began reading about keyword matching options — and thus began the short but crazed period of trying to figure out how exactly this all worked: broad match, modified broad match, phrase match, exact match. My brain hurt.

My PPC friend, who had now become something of a cheerleader and advisor due to the questions I was sending him, sent me the link to a WordStream article about modified broad match and why I should use it; the article also included a nice graphic. OK, now this made sense. Thank you! 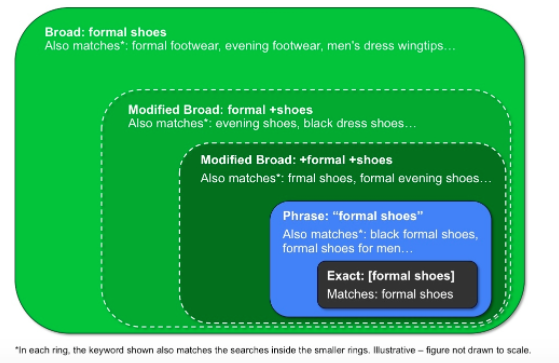 TIP: Take the time to fully comprehend these options and how they work. Choosing the right option will help you save money and improve your campaign effectiveness.

Tip #4: Make changes based on data, but make one change at a time

Using AdWords was a real eye-opener because for the first time since Google implemented Not Set/Not Provided, I could see people’s search queries. Hot damn! Based on this data, I realized the ads I had initially created based on keyword research did not have the right ad copy.

And I could see I needed to create some new landing pages in order to match the keywords people were actually using.

Instead of creating a bunch of new ads all at once, I created one new Ad Group, then created the landing page for that Ad Group. I did that because I wanted to test the Modified Broad Match option — as well as determine whether creating these more targeted ads would solicit inquiries.

Result: Within a day, the client received their first PPC inquiry and purchase order from this new Ad Group! Woo-hoo!

TIP: Continually educate yourself about AdWords and the options available. A few days after this first conversion, I read up on and then implemented dynamic keyword insertion. Don’t be afraid to experiment. You can always turn something off.

Tip #5: Make sure you can track mailto: clicks from your website

The challenge with some of my clients, however, is that the majority of their inquiries come in via email. For a while I had clients track their email inquiries manually, but with the onboarding of my first AdWords client, I wanted to know if a method existed for tracking these inquires.

The WordPress developer I work with, Stephen Merriman of Cre8d Design, did research and suggested we start using Google Tag Manager, which he then configured for me.

With Tag Manager, you add special code to the website; then within Tag Manager, you set up triggers to track specific events, including PDF downloads, video plays, button clicks, and yep, mailto: clicks.

Once you have Tag Manager configured, you can then set up the mailto: click event as a Goal in Analytics, which you can see in Figure 3. Each click on the email address shows up as a conversion in the All Channels Report (Figure 4).

Tip: To have your RFQ and mailto: click conversions show for Paid Search in Analytics, be sure to import your Analytics Goals into AdWords (Figure 5) rather than directly setting up your Goals in the AdWords interface. (Yep, I made that mistake.)

Tip #6: Track the source of all your inquiries

My client’s AdWords campaign slowly began to take shape. The ads were beginning to appear for the right kinds of search queries, the ads’ position on the SERP began to improve, and clicks began increasing.

However, conversions remained low — okay, non-existent — for the next couple of weeks. Argh! When I reported this to the sales manager, she replied, “But we are getting inquiries. I’ve had three calls, and they’re from the ad. I asked.”

Oh! Good to know! What this told me is that one, I needed to test adding the call extension to the ads, and two, I could stop wasting a sitelink for the RFQ form, since no one was using it.

TIP: Ignore what your competitors are doing. I originally included an RFQ sitelink because everyone else had one. The one thing I love about AdWords is that it’s so easy to test and verify these sometimes faulty assumptions.

Tip #7: Check your AdWords campaign several times during the week

When I first set up my client’s account, I checked the account every single day because I wanted to be sure nothing went awry. Now that things have smoothed out, I check the account every other day or so versus putting it on autopilot.

Checking your account regularly gives you a number of benefits:

TIP: Consider comparing your AdWords search query data with your Search Console organic query data. When I did this, I learned my AdWords landing pages could also do double duty for SEO.

Am I glad I made the move to AdWords? Yes!

If you’ve been thinking about setting up an AdWords campaign, I say go for it. Now that I’ve gotten over the initial hump, I can see the benefits of paying for clicks. But I still have much, much more to learn.

To help ensure your success and reduce frustration and wasted money, take the time to learn how to set things up properly, especially your Goals in Analytics. Then analyze your data regularly. Without this information, you won’t know if your ads are working!