The queries picked were pulled mostly from Google Zeitgeist, Microsoft’s xRank and Yahoo Buzz in the categories of Entertainment, Health, Local, News, Retail, Sports, Travel and Other. Then after running the 200 queries, Citigroup picked the winner based on two criteria:

1) Relevancy of the organic search results; and
2) Robustness of the search experience, which included factors such as image and video inclusion, Search Assist, and Site Breakout.

Here are some of the charts from the study: 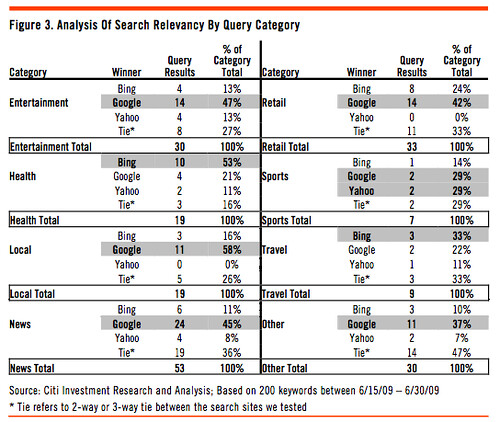 Greg covered how many searchers preferred Bing’s look over Google, but said they would stick with Google as the default engine.

For more coverage on this study, see paidContent.org and AllThingsD.