President Barack Obama took office officially today plus launched a new White House web site as part of his transition. But the major search engines have yet to catch up with the power change. Google still lists President George W. Bush as being in power, sort of: The screenshot above shows what you get in […]

President Barack Obama took office officially today plus launched a new White House web site as part of his transition. But the major search engines have yet to catch up with the power change. Google still lists President George W. Bush as being in power, sort of: 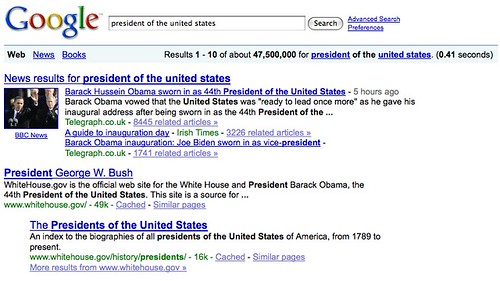 The screenshot above shows what you get in a search for president of the united states at Google. A similar situation happens for a search on president: 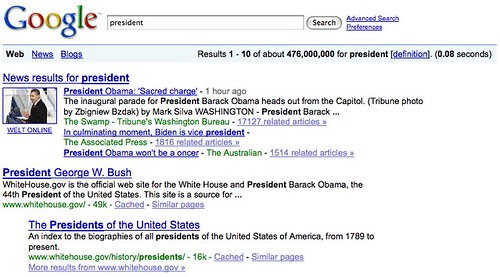 Ah, but it’s only been a few hours — surely Google will catch up with the changed page soon. Look closer. Google already knows the page has been updated. While the title may say “President George W. Bush,” the description says “WhiteHouse.gov is the official web site for the White House and President Barack Obama, the 44th President of the United States.”

What’s going on? In this case, Google is using the title for the White House web site that is provided from the Open Directory Project here. Because the searches above use the word “president” in them, Google in its mistaken wisdom has decided that a third party title for the web site is more accurate than the site’s own title.

There’s a solution — the NOODP meta tag. Using that prevents Open Directory descriptions from being used and though Google’s help document isn’t clear, it should also suppress the ODP title as well. Hopefully, the Obama team will install the NOODP tag on the site soon.

Things are better on the Google front when it comes to a search for white house: 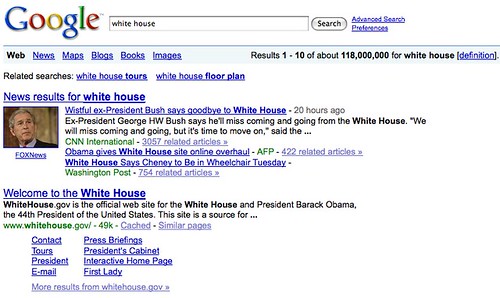 There, you can see Google is using both a current title and description for the page.

Over at Yahoo, it has yet to catch up with the times either for a search on president of the united states or white house, as shown below: 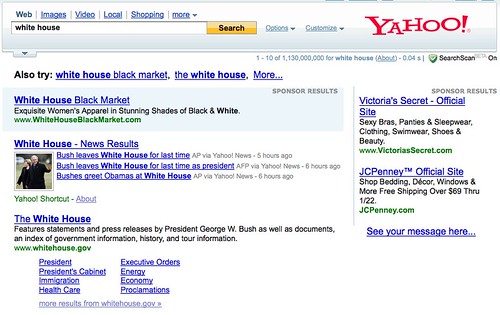 The same is true at Microsoft for white house and president of the united states.

By the way, curious about what will happen with the “miserable failure” search that was ranking the US president’s home page number one for those words when Bush was in power? My Bush: Fix Your “Miserable Failure” Googlebomb Legacy Before Obama Takes Office article has background on the situation.

Today, I noted that the old location for Bush’s biography is not being redirected to a new location. I suspect that should finally kill the bomb for good, at least for “failure,” where it is still going off at Google right now:

That should also stop it for “miserable failure” on Yahoo and Microsoft, where it still ranks Bush tops.

Of course, the change also breaks anyone over the years who has linked to Bush’s bio for educational or other non-political purposes. It’s also a change I don’t think was deliberately done. All US presidential biographies were moved to new pages (George Washington was here but is now here, with no redirection from the old location to the new one). That means lots of broken links out there (nearly 5,000 of them, according to Yahoo).