In my Ad Age column last month, I joked about Google taking a “drill, baby, drill” approach in rolling out more ads everywhere on its properties. Now the latest ad reservoir to be tapped: Google Finance, as announced today on the Google Blog. You’ll find a new box as shown above sporting ads on the […]

In my Ad Age column last month, I joked about Google taking a “drill, baby, drill” approach in rolling out more ads everywhere on its properties. Now the latest ad reservoir to be tapped: Google Finance, as announced today on the Google Blog. You’ll find a new box as shown above sporting ads on the Google Finance home page, as well as ads that are running along the sides of internal pages: 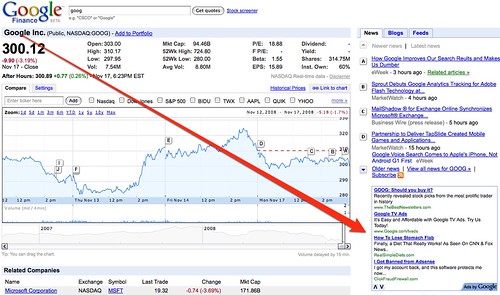 Google also notes that Google News will be getting ads:

In the very near future, we will start testing text ads on a small number of news refinements within Google Search — so if, for example, you type “iPod” into Google.com and then click on the news link on the upper left-hand side, you might see text ads alongside those results.

Actually, the testing on Google News is live now. I talked to Nick Fox, business product management director at Google, who clarified that, if you go directly to Google News, no ads will appear. But if you do a web search, see a news item, and click to Google News, then ads will be shown. Here’s a screenshot Google sent of how they appear to those in the test: 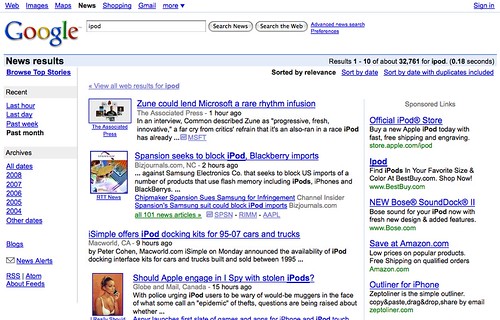 The ads appear similar to regular Google search, along the right side of the page. The idea is that because an actual search was conducted, the searcher is more likely to be receptive to targeted ads than if s/he was browsing. However, searches on Google News itself will not generate ads at the moment. That may change after further testing.

You can expect even more ads types to be coming, Google also said:

We’ve been testing different advertising formats for years (some have been more successful than others), and over the next few months, you’ll see us continuing to experiment with new ads in new places.

The reason for all this is clear. Google’s revenues aren’t growing as fast as in the past. No ifs, ands or buts — as its stock price is down, and people are fearing a Google ads shortfall, Google is looking to earn more, in my view. It’s as I wrote in my column:

It’s an invasion of ads on Google. They’re showing up in places where the search engine has never had them before, with formats we’ve never seen. What’s going on? The economic times are getting tougher, so Google’s doing its own form of “Drill, baby, drill” and tapping into reservoirs it has left untouched until now …. Of course, that doesn’t mean it’s anything goes at Google. I think the company still will show care in where and how it allows ads. But these new areas will mean new opportunities for advertisers.

Indeed, below are articles we’ve run recently about new ways Google has been allowing ads into its properties in the past few weeks:

But officially from Google, why this sudden rollout of new monetization? I asked Fox about it, and he said:

We’ve always said we’ll monetize these properties when it made sense to from a user and advertiser perspective. In terms of the timing now, we’re looking at what decisions we’ve thought about and moving ahead with the nobrainer ones. There’s no time like the present to make them.

No time, as in the tougher economic climate? Although Fox said he’s not able to comment on Google’s current financial performance, he did say:

I think I come back to Sergey’s point [Google cofounder Sergey Brin, in a recent financial call] about “scarcity creates clarity.” That if a company faces a tougher economic climate, that company would be more rigorous moving ahead with the nobrainer decisions out there.