Google is having a special event today featuring former US vice president Al Gore to announce its new Google Earth 5.0 software that features new underwater views of the world’s oceans (Google Ocean) and 3D views, as well as “historic imagery” that allows people to see the earth back in time through archived satellite views […] 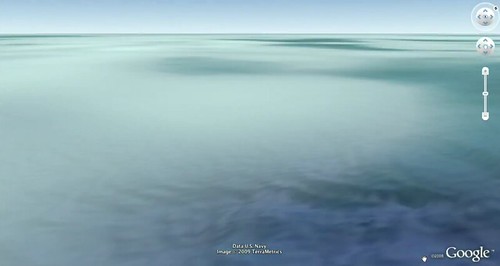 Google is having a special event today featuring former US vice president Al Gore to announce its new Google Earth 5.0 software that features new underwater views of the world’s oceans (Google Ocean) and 3D views, as well as “historic imagery” that allows people to see the earth back in time through archived satellite views and aerial imagery, along with a new Google Mars 3D feature, which has additional hi-resolution photography and images of the planet. Google also blogs about it here and here.

Greg Sterling and I are at the event. I’ll be live blogging as the announcements unfold, and we’ll have a more comprehensive look at the new Google Earth that will be linked to from this post.

10:00am: People are still flowing into the auditorium at the California Academy Of Sciences here in Golden Gate Park, San Francisco. Deafening whale noises are, well, deafening.

10:05am: Greg Farrington, Executive Director of California Academy Of Sciences welcomes. “I like to call this building the Kingdom of Wow.” Reference to how kids are amazed by what they find here. They use Google Earth for lots of things. One person tries to map all the ants in the world (not individually, he plots clusters). Later we’ll see real-life 4th graders (no thrill for me, I own one already).

Eric Schmidt came up, all my notes lost, sorry — connection went down.

John Hanke, Director, Google Earth & Maps: We’re extending Google Earth to include the world’s oceans. Extending to Marsh with the latest images. New way for people to record 3D fly-thurs. Finally, we’re going to introduct the concept of time and use historic images.

Why? Part is due to bottoms-up innovation at Google. Some outside influences.  But a common thread is story telling.

Talks about the various ways Google Earth tell stories like hurricane devastation. Favorite story is of Amazon natives suing Google Earth to try and provide stewardship of their lands. Funny pick of them in rainforest in native dress and laptop computers.

First feature in more detail is historical imagery. Until now, you could only see a single snapshot at a given point of time, and the old images went away. One engineer thought it would be cool to expose all the historic stuff.

Show the academy we’re at being built in the 40s up until today.

Eric Schmidt comes up. “It took courage 20 years ago when no one wanted to hear about the importance of the earth and the environment.” Courage to get the science and policy right and fight against so many special interest.  Al Gore comes up.

Gore jokes that the intro was too much, say he is beta testing a hubris detector that was going off, to laughs.

Talks why he’s excited about historic imagery and tours. “Without realizing it, we use these organizing metaphors to understand the world around us,” Computers used a desktop metaphor, files and photos. “Google Earth uses the earth itself … it makes more sense.”

Noticed a big change when doing his slideshow on climate change when when “painstakingly” gathered before and after pictures. “With the new version of Google Earth and its historic imagery feature, you can do it in a much more compelling way.”

Shows images of the Granell (I think) glacier in Glacier National Park, how the glacier has been receding over time.

Zooms into 3D view showing how there’s hardly any glacier left. “This is an extremely powerful educational tool.” Hopes it will be used by people around the world to “see for themselves” in advanced of an upcoming environmental conference.

Congratulates and thanks Google for work, leaves stage.

Hanke is back up. “Now I want to talk about the ocean.” Jokes how Sylvia Earle, explorer-in-residence for National Geographic Society, Deep Search Foundation, loved the product but said it should be called Google Dirt, since it was neglecting most of the world.

She worked with many engineers at Google to enlist their “20% time” to get Google Ocean going. One of first women to dive. Set a record at one time for deepest.

Earle up now. “Anyone can discover in a few minutes what took me 50 years to understand.”

Shows dots in the ocean where if you click, you can see videos overviews. Shows example of Hawsbill Turtle swimming underwater at Galapagos. Says it took her a long time to see that; says anyone can now (OK, raining on parade, but it’s not that dramatic. But she makes a good point that it’s easy to click in any area and discover, rather than say keyword search across the web.”

Now she skims the ocean and then dives us under “like a dolphin,” and we can see the Monterey Canyon off the California Coast. And it’s pretty cool now, the underwater terrain.

Clicks on a shark icon, takes you to where a radio-tagged shark is and you can backtrack (backswim?) across everywhere it has been. Very cool (though I’m sure some shark nation is preparing a privacy lawsuit).

Next to Gulf of Mexico. Shows the sea surface temperature, how warm it is there and spreads out across the world. Very cool to see the bands of red and yellow and blue.

Heads to Patagonia, and we get a poor little seal eaten by a killer whale. I think it was a seal!

Now shows images from Cousteau and talking about how little was known in his time and would be changed so quickly so soon.

Now shows a Coelancanth (fish that’s been around 300 million years).

Goes to Marianas Trench, deepest part of the earth, 7 miles underwater. You can go down in the Trieste that explored it.

Now to Great Barrier Reef, talks how 33% is now protected.

“Now we can understand that the ocean drives climate and weather… gives us most of the ocean we brief .. if we shut down the big ocean systems, it’s our life support.” Not quite exact quote, sorry, but you get the point.

Mentions Google Mars and exploration there but jokes if you want to live there, “good luck”

Invites, implores people to download Google Earth and “dive in” and learn.

Hanke back up, thanking partners from Monterey Bay Aquarium to Oregon State University.

Terry Garcia, EVP, Mission Programs, National Geographic Society. Says it can be tempting to think everything has been explored already. “There are still places out there we have not explored, believe it or not.” Say you can look at any map and see vast areas of blank space. (I can see it now, the “unexplored layer” for Google Earth.

Google Ocean for us will be a platform for showcasing talent of writers, photographers and explorers (hmm, wonder if Microsoft’s Virtual Earth will be getting all this stuff too — this type of love lavished on Google’s product is a pretty ringing endorsement, making it harder to compete against it).

Get lots of examples of videos and content from National Geographic that will be scattered throughout Google Ocean. Says it’s just the beginning. They hope to launch a series of expeditions and take people along through Google Ocean.

“Over the years, countless numbers of photographers, scientists and explorers have come through my office .. and with almost no exception, they come back as conservationists,” he says, as they recognize the loss. “This is going to allow us to take the public and show people exactly what is happening and hopefully engage them so we can reverse some of these losses.”

Hanke back. Introduces Google’s Marissa Mayer, VP consumer search products, talks about going to Australia for the first time and scuba diving the Great Barrier Reef there and then talking to Google engineers about climate change. That caused a 20% project for Google Ocean. This is an example of small teams with “lots of passion” can bring about innovative changes. Google StreetView was fastest growing project in 2008, started as a small project. Google Sky, Google Maps (or StreetView) for iPhone other examples.

Welcomes now Jimmy Buffett (my next door neighbor would be going wild now, big fan). Comes up with a guitar, says there are a lot of Parrotheads among Googlers he’s met, thanks their parents.

Says he hopes some of the historical clips in Google Earth don’t go back to me, had some embarrassing moments (to laughs), says he doens’t want to see ’64 come back around again.

Talks of seeing NBC report on manatee plight, wondered if there was more that could be done.

Embedded Margaritaview culture because when you’re working on conservation, “you might need a place for a beer now and then.”

Now off to Hawaii, we dive underwater, Margaritaville playing, taking along his next tour route, there will be cameras for the tour. And you can buy tickets right within Google Earth, heh. So after your expedition of the Mariannas Trench, you can plug into the tour videos online.

And now we get a song. Which I’d record if Apple had a concept of recording video on the damn iPhone. Afterward, he joked we’d be seeing it on YouTube soon enough.

I’m out of power, and the conference is just ending. Convenient!

For related news, also see here on Techmeme, where stories will begin to build.