Mobilegeddon Is Beginning, Not Ending

The Mobile Friendly Update has now "fully rolled out" according to Google, but columnist Bryson Meunier believes this is only the beginning. Google’s mobile friendly update came and went with a bit of a whimper, rolling out on April 21, 2015, to much fanfare and not much substance.

Part of this is because webmasters were so concerned about the impact of “mobilegeddon” that they finally did what they should have done in 2009 when Google announced blended mobile ranking. Google tells us that there was a 4.7% increase in mobile friendly sites in March and April as a result of this mobile friendly update, so a lot of people were scared enough of potential traffic loss to make their sites mobile friendly.

But then 4/21 came around, and the update was a lot tamer than its apocalyptic nickname implied. Those who monitor changes in rankings en masse didn’t see anything that would justify the Google quote about this update being more significant than Panda or Penguin. While it may have affected a lot of queries, it didn’t (as far as we know) level businesses the way that its predecessors did, and wasn’t “significant” in that sense.

Before we give a collective shrug to the idea of mobile friendly content, however, we should remember three things:

1. Businesses Lost Search Traffic As A Result Of Not Being Mobile Friendly

A new (to the U.S., at least) development resulting from the mobile friendly update is that, for certain queries, listings rank higher in smartphone search than they do in desktop search simply because the site that previously ranked higher is not mobile friendly.

If you still haven’t seen any examples of this, definitely check out Glenn Gabe’s growing list.

You can also see it pretty clearly using SEMRush. If I put in a site that I know is mobile-unfriendly — like our friend (and SEL Editor In Chief) Matt McGee’s U2 fan site, which he said on Mobilegeddon eve would be leveled by the mobile friendly update — we can see that it appears to have taken a little hit.

Not “leveled,” fortunately; but since it’s only 6% mobile-friendly according to SEMRush, we see smartphone rankings decreasing at a faster rate through the mobile update than desktop rankings.

The desktop rankings appear to remain constant, with the site losing only five “top three” search results since April 14.

On the other hand, the mobile rankings clearly trend downward, losing 43 “top three” search results since that time.

This is likely not accidental, but a result of Google’s mobile friendly update. Hopefully, Matt will update us in the future on how this affected traffic, but early results from SearchMetrics further demonstrate that there were clear winners and losers in this update.

The sky never fell, Chicken Little — but for some, it clearly rained.

2. Mobile Rankings Have Never Been More Different From Desktop Rankings Than They Are Right Now

Consider this: Back in 2011, one of the most popular and well-known SEOs in the world, Rand Fishkin, was not optimistic about the future of mobile SEO, predicting instead that mobile search rankings and desktop search rankings would converge, eliminating the need for a mobile website.

In fact, it has actually played out in the exact opposite way, with search results and queries diverging — not converging — over time. Even with smartphones having the ability to access content that computers can, search engines have optimized the search results for desktops and smartphones, and what we’re left with is smartphone search results that aren’t the same as what you’d see on a desktop or laptop.

This started well before the mobile friendly update. I’ve listed differences between mobile and desktop search results on Search Engine Land over the years, and in 2013, Google announced that they would start ranking pages with mobile site configuration errors lower in smartphone search results.

In June 2014, Bright Edge reported that mobile search results were 62% different than desktop results. SEO Clarity reported that this number was 67% prior to April 21 and climbed to as high as 73.1% following the mobile update. It has since stabilized a bit, with the last reported number at 69%, but it’s clear the mobile friendly update has only increased the already big difference between smartphone and desktop rankings. 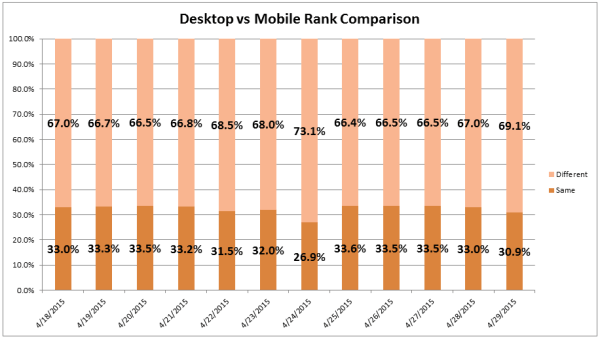 Feature parity may be happening, as smartphones get the same functionality as computers, but search parity isn’t. Mobile results continue to diverge from desktop results. Source: SEOClarity

3. It Will Only Get Worse For Those Not Optimized For Multiple Screens

And the genie is not going back in the bottle. If you’re hoping that Google will abandon their mobile-friendly algorithm, never say never, but it’s unlikely to happen anytime soon. In fact, I respectfully disagree with my friend (and SEL editor) Barry Schwartz, who recently said that he thinks we’re seeing the worst of the mobile friendly update. Mobilegeddon, I think, is really just beginning.

Google has more of an incentive to continue to update search results for mobile searchers, as they recently announced that there are officially more smartphone than desktop searches in the U.S. As long as searchers continue to use their smartphones to search, and they are in growing numbers, Google will prioritize those searchers and attempt to give them the best experience.

This means that Google will continue to tweak their mobile-friendly algorithm over time, adding factors as they see it helps the mobile searcher.

@brysonmeunier @googlewmc we have nothing to announce, but if you think about it, there's no reason for us to stop improving our MF algos.

So keep improving your sites for mobile searchers and don’t use the underwhelming mobile update as an excuse not to. If you’re not yet mobile-friendly, make it happen. And if you are mobile friendly, prepare for the next update — because in this new era of SEO, it’s no longer possible to ignore mobile searchers and mobile sites and compete with those who don’t.