Six Odd Tactics For Getting Ads Into Google Maps

As usage of Google Maps grows, marketers are increasingly drawn to the promotional potential found there, and some innovative ways of insinuating ads into the interface have evolved. Here's a breakdown of some of the strangest tactics that have been dreamed-up for getting messages in front of Maps users.

As use of Google Maps grows, marketers are increasingly drawn to the promotional potential found there, and some innovative ways of insinuating ads into the interface have evolved. Here’s a breakdown of some of the strangest tactics that have been dreamed-up for getting messages in front of Google Maps users.

Just this month it was reported that Google was awarded a patent for overlaying ads on sections of images. This could easily include overlaying ads on Street View Images within Google Maps, placing them over regions of photos containing billboards and posters on the outsides of buildings. 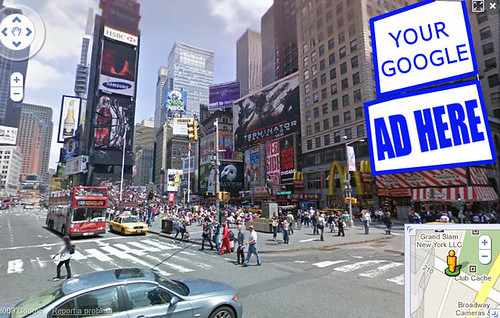 Just imagine the amount of advertising real estate that Google could resell in Times Square alone, using this method!

This variation on the concept of virtual product placement probably strikes companies like Clear Channel Outdoor, which owns billboards all over the country, as somewhat invasive. It also reminds me of a form of guerilla marketing like the confrontationalist artwork of Ron English and the Billboard Liberation Front, who are famous for hijacking billboards by covertly replacing the ads with anti-commercial messages that at first glance often resemble bona fide billboard ads. 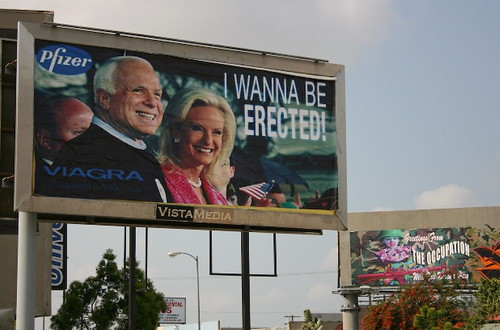 While the work of the Billboard Liberation Front is rather funny and simultaneously thought-provoking, the idea of billboard hijacking for profit is not—it seems a bit parasitic if profit is not shared with the owner of the original ad real estate.

Taking it a step further, what if Google began offering a product allowing owners of large amounts of historical video and photo archives to embed ads into their content—even doing actual product placement such as parking a Coca-Cola can unobtrusively within a shot? I imagine there would be some outcry from those who dislike historical revisionism.

There’s actually evidence that Googlers follow some of the developments within underground guerilla marketing movements such as that of the Billboard Liberation Front, and have particularly paid attention to the tactics of confrontationalist artists who invasively inject promotional messages into environments. For instance, about a year after I reported on artists using laser pointers to draw digital graffitti projected onto the sides of buildings, Google set up a similar system at their Google Dance 2008 as a party entertainment, allowing visitors to draw messages on the side of one of their buildings: 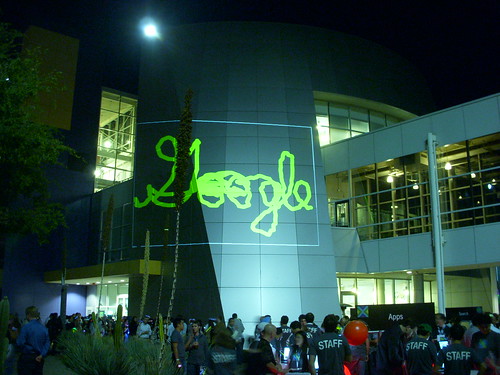 If you consider Google’s drive to introduce disruptive technologies, it’s not all that surprising that they may adapt some techniques that have originated in subversive guerilla marketing circles.

I’ve reported on the phenomenon of “roofvertising” beginning a few years ago. While I initially joked about it, some companies have actually taken the concept seriously, offering rooftop ads as a part of their repertoire. 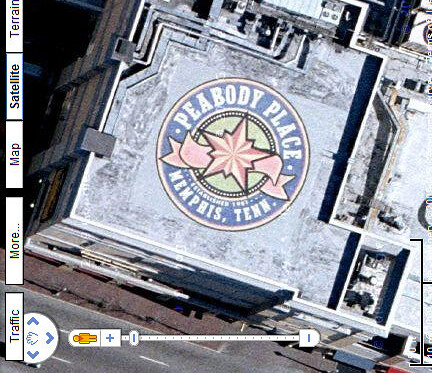 It appears someone in Google was inspired to come up with a way to monetize all the “unsold inventory” of blank roofs appearing in satellite photos in Google Maps, since they later obtained a patent for overlaying ads on the satellite images. This would be another form of virtual product placement.

“Land Art” sometimes referred to as “Earth Art,” is the practice of inscribing pictures and words into the ground with the intention of allowing them to be viewed from high above. Subsets of this category include arranging stones or other materials to form the picture, or planting crops (“Crop Art”) to form images, or selectively mowing down trees/grass/crops in order to draw (the techniques for generating “Crop Circles”).

This art form and its commercial application were likely inspired by ancient geoglyphs, such as the huge drawings written across the land in South America. 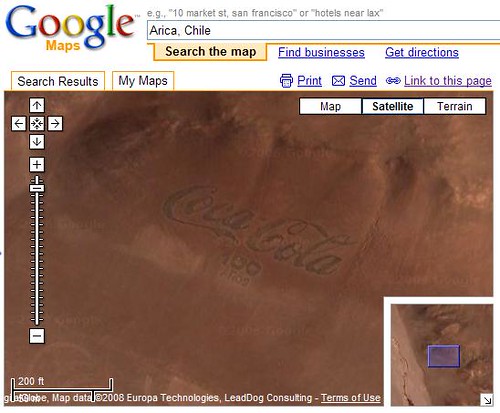 Australia.com actually managed to employ yet another subset of this type, using “sandvertising” to form their domain name on a beach, timed perfectly to be caught by Google Maps during a fly-by for refreshing aerial photos. 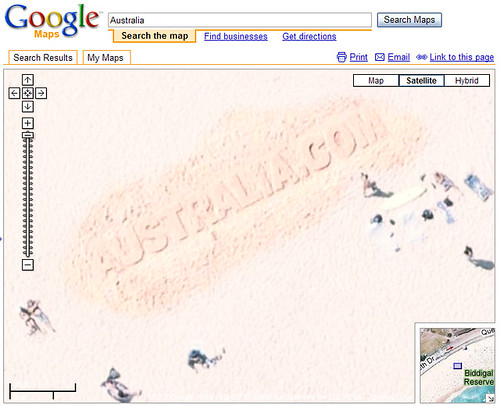 In the last year, the worlds largest ever geoglyph was created as a collaborative art piece in Great Britain, the “Britglyph“. It was a representation of a long, snaking watch-and-fob, representing John Harrison’s Chronometer. I don’t believe it would be discernible/viewable from aerial or satellite photos, so it’s a sort of virtual art which would only be visible when displayed via plotting it on maps like a sort of massive dot-to-dot puzzle.

In the past, I’ve joked about how a company might offer to sponsor a small town in return for replacing the town’s name with their brand name. Little did I realize that this had actually already happened. In 2005, a small town in Texas offered to rename themselves “DISH” in all-caps for the DISH Network company in return for free basic TV service for ten years and free DVRs for everyone. Thus the town is now DISH, Texas. 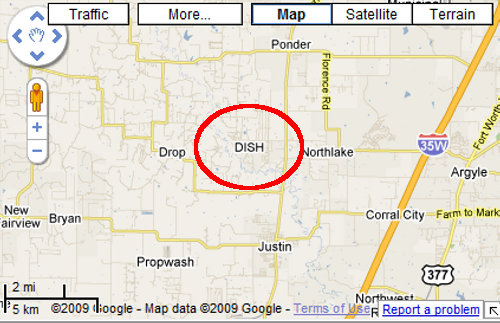 While some towns may sell their name for a price, yet others are changing their name to optimize themselves to be more findable via internet search. Such is the case with “Eu” in France, who suffered from getting eclipsed in search as people sought European Union information, and have since renamed themselves to improve their findability.

5. Buy an island or country and take over domain naming rights

I’ve also joked in the past that one might purchase a small island or country to gain naming rights, but there was an almost immediate real-world example when the peer-to-peer file sharing service, Pirate Bay, claimed they’d like to buy a small island country such as Sealand. Their motivation in part was to be able obtain the island to get “…somewhere we can name The Pirate Bay, so we can look on Google Maps and find ourselves there.” 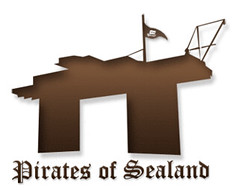 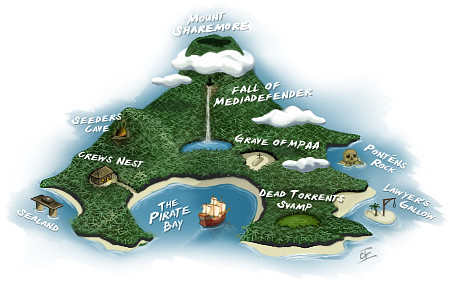 The Pirate Bay’s Jubilee Celebration image – perhaps indicates that
they’d rename not just the island, but also the features of it as well

In yet another case, the Sheikh Hamad bin Hamdan Al Nahyan of the Abu Dhabi Royal Family has long held the Island of Futaysi in his family, and has had his name inscribed into the island on a massive scale.

Strictly speaking, he hasn’t yet renamed the island after himself, but actually inscribing in humongous letters across the island is pretty darn close in my book. Either way, the “brand name” is showing up when viewed in Google Maps.

Seriously, though—considering that some of the largest corporations have cashflows that completely dwarf the economies of many island nations, this concept of buying a country for the purpose of renaming it for longterm brand name promotion is not inconceivable. Considering Haiti’s dire needs at the moment, what if they were to offer up their name in return for staggering quantities of reconstruction money? Could you imagine a “Micro-Haiti” in the future?

Skywriting, or using aircraft to write messages across the sky, has been around for nearly a hundred years now. Since Google’s Street View cameras are often capturing large quantities of sky as their car passes by, it’s inevitable that they’d sometimes capture skywriting as well: 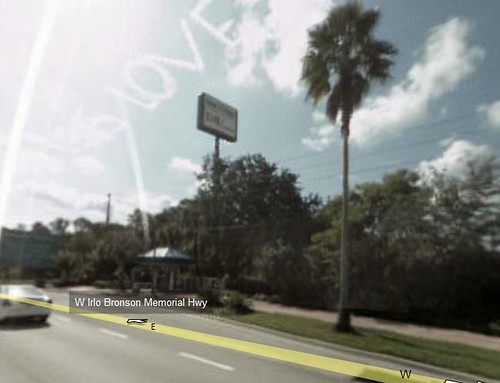 Yet having skywriting ad messages captured via Street View pictures is more the product of accident rather than intention. Using GPS tracking devices, people are now using records of their paths across the landscape to trace out pictures and words, such as pilot Del Olson’s experiment in skywriting his name by flying his 1949 Cessna C-140A airplane while carrying his MotionX-GPS device. Other hobbyists are also traipsing around on the ground, drawing pictures with their paths using iPhone apps and displaying them over maps on sites such as Path Tracker and elsewhere.

There’s also an example of this done on a larger, commercial scale for promotional advantage. In 2007, Gulfstream Aerospace reportedly traced out the initials of their new business jet, the Gulfstream V, during its early test flight, specifically so that the monogram skywriting could be viewed on sites such as FlightAware which provides flight tracking. 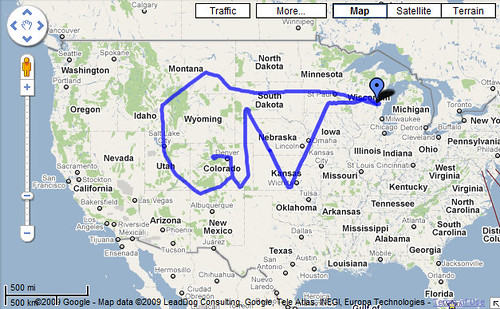 As things like the iPhone tracking application become more common, I expect we’ll see quite a few more examples of virtual skywriting and virtual path writing. Interestingly enough, the artist, Ron English, has also been involved in skywriting, treating it as a form of Graffitti.

As these examples of “mapvertising” illustrate, the popularity of Google Maps and other online map user interface applications are drawing a lot of people to come up with very creative ways of getting attention within them. What’s next?