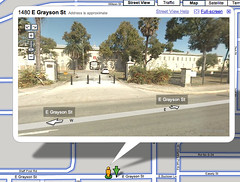 Reportedly, Fort Sam Houston gave Google access to the base after a promise not to take photos. An anonymous person told the LA Times, “Unfortunately, Google didn’t follow the rules.” Google spokesman Larry Yu said, “against our policy, we did mistakenly access the base.”

The Street View provides clear imagery of control points, barriers, headquarters and security facilities that pose a risk to our force-protection efforts.

So now, Google is banned from U.S. military bases.