One of the problems with Twitter is knowing who to follow in particular areas. Now Kevin Rose has launched WeFollow, a nice directory of people organized into categories. It’s not perfect, but it’s a great start and well worth visiting. At the site, you’ll see the top five people in popular categories such as celebrity, […] 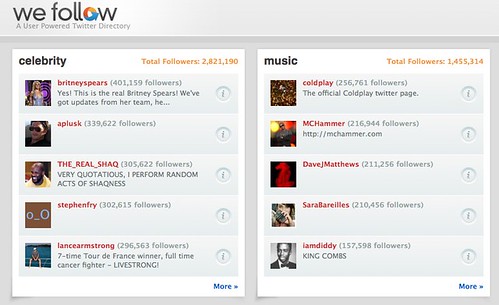 One of the problems with Twitter is knowing who to follow in particular areas. Now Kevin Rose has launched WeFollow, a nice directory of people organized into categories. It’s not perfect, but it’s a great start and well worth visiting.

At the site, you’ll see the top five people in popular categories such as celebrity, music and news. You can also drill-down into any category to see all the people listed in them. On the right-hand side of the home page, there’s also a list of more popular categories:

That list of popular categories (or tags) is dynamic and has already changed since the site first launched. For example, socialmedia and marketing weren’t on it originally, but then they rose up.

What happened? The top categories are based on the total number of followers that everyone in a particular category has. For example, at the time I wrote this, the “marketing” category had 76 people who have placed themselves into that category. Those people collectively had 60,236 followers. Just above marketing was the apple category. It had 93 people who had 73,617 followers collectively. The more followers a category has collectively, the higher it comes on the list.

Adding yourself is easy. Simple send a Twitter reply to the WeFollow twitter account with the areas you’d like to be listed under, up to three of them, with each area starting with a # sign. For example, if you wanted to be listed under wine, design and awesome, you’d do it like this:

Awesome is a category? Yep, it is. Anything can be a category, once someone assigns themselves to it. Of course, if you’re looking for visibility, it makes sense to find the most popular category that relates to yourself, then place yourself in it.

There are no help pages on the site, and since it’s all self-classification, there’s nothing preventing you from putting yourself in a category like “music” even if you’re not a musician. However, that doesn’t guarantee visibility. With each category, people are then listed by the number of followers they have. So for me, I currently get to be 5th in the blogs category: 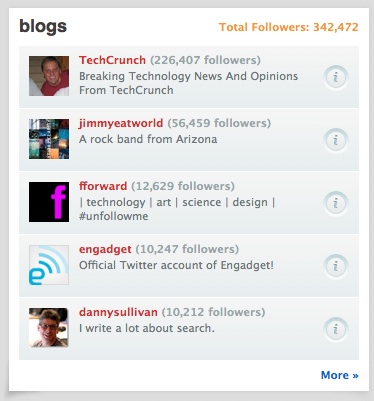 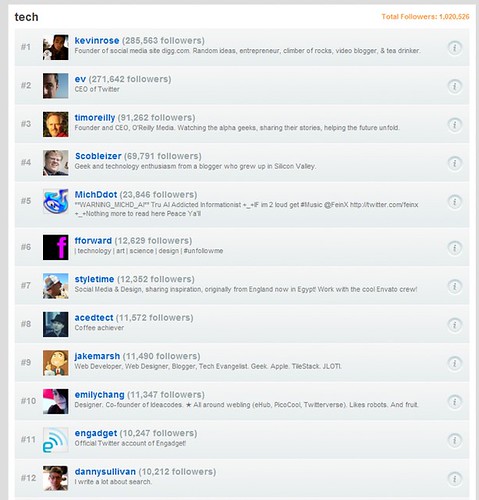 That’s because in the techt category, there are more people with more followers than me (want to help move me up? follow @dannysullivan on Twitter!)

Some people got special treatment. @britneyspears tops the celebrity list; @coldplay tops the music list and @barackobama tops the politics list, but none of these accounts asked to be listed in WeFollow as others are having to do (I can tell this, because you can see none of them sent a reply message to WeFollow).

I’m sure some will feel that’s unfair, especially given some of these accounts also have huge numbers of followers due to being on Twitter’s suggested list. But it does make sense that some of these categories were prepopulated.

It’ll be interesting to see how the directory changes, over time. So far, there seems to be no limit on how often you can reclassify yourself. Don’t like where you put yourself initially? Just send a reply to WeFollow with new categories, and that will put you into new places.

Finally, it’s also uncertain how quickly (if at all) that WeFollow updates user counts. For example, the number of followers I have has changed since I first listed myself with WeFollow about two hours ago — but my old count is still listed on WeFollow. My assumption is that if I relisted myself, the count would update to my latest figure. That’s easy to do, but it’s annoying for followers if people constantly have to do this (though good visibility for WeFollow). Hopefully, WeFollow is smart enough to automatically do this. Alternatively, it would be nice if you could add yourself to the service and update through direct messages. All that @wefollow stuff that’s going to be happening will get annoying soon enough.

Postscript: Updating your tags does not appear to update your count, I’ve just discovered. Also noteworthy is that WeFollow has its own top Twitterers list that differs from the long-standing Twitterholic list. Both things make me more certain that WeFollow plans to run some type of automated rechecking. so that its “top” list is an attraction, as well. Also see related commentary now on Techmeme.

Meanwhile, what if you tag yourself in more than three categories, as @mattcutts tried:

Doing this makes WeFollow ignore the request, as best I can tell. When I looked, Matt hadn’t shown up in ANY of these categories — yet when I reclassified another Twitter account into one of them AFTER his request, that account did show up.

Postscript 2: Correction — as noted below and by others who have twittered me, if you use more than three tags, only the last three are used by WeFollow.

Postscript 4 (Mar 19): Various people have reported that WeFollow is back to using only three tags again.