It’s search popularity statistics time again, and I’m starting off with the latest figures from comScore. Finally, a change — Google slips while Yahoo and Microsoft gain. Trouble for the Big G? Not really — because in terms of raw number of searches, June 2008 was another record breaker for Google. Below is the percentage […] 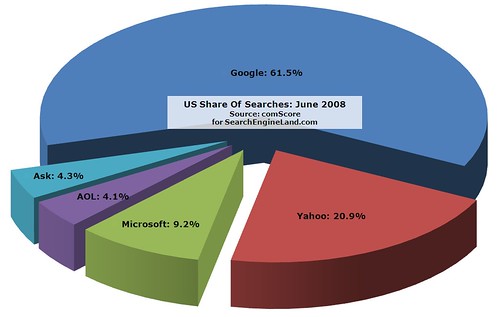 It’s search popularity statistics time again, and I’m starting off with
the latest figures from comScore. Finally, a change — Google slips while
Yahoo and Microsoft gain. Trouble for the Big G? Not really — because in
terms of raw number of searches, June 2008 was another record breaker for
Google.

Below is the percentage of searches handled in the United States by each
of the five "core" search engines that comScore tracks:

The trend over time? Here’s data going back to June 2007: 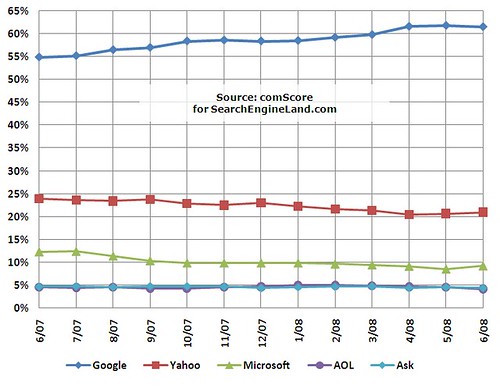 In contrast, Microsoft showed its first gain in the past year. After
months and months of incremental decline, Microsoft rose from an 8.5% share
in May 2008 to 9.2% in June 2008. That’s the first full month that
Microsoft’s Live
Search Cashback has been running, so this is likely a factor in
Microsoft’s rise.

Success! Perhaps — but then again, fair to say that Microsoft is hoping
that program will generate more than a 0.7% rise in its share, and that’s
all it has gotten so far. Clearly the program isn’t a massive initial game
changer that some thought it to be, or we’d have seen a much larger
month-to-month jump. Instead, if Cashback is going to be a success, clearly
now it will be something that happens over time. So we’ll wait and see if that
indeed happens in the coming months.

Meanwhile, hey
little Yahoo, you’re bucking up! After months of drops with the
occasional rise, Yahoo posts two straight months of gains, coming up from
20.4% in April 2008 to 20.6% in May, then 20.9 percent in June 2008. Why? No
idea. Yahoo’s
Search
Monkey program started kicking off at the end of May, but I doubt this
was the driver. Perhaps all that attention over Microsoft wanting to buy
Yahoo got a few more searchers headed Yahoo’s way.

Before Microsoft and Yahoo feel too good about Google’s "fall," let’s
consider the actual number of searches each handled versus market share? 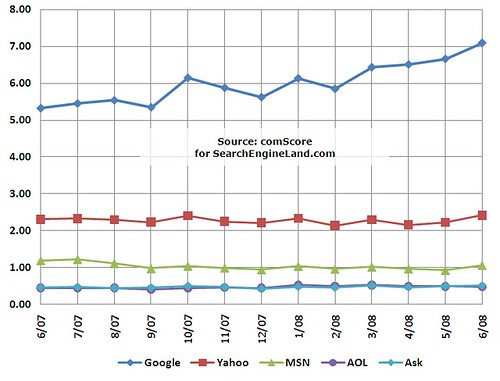 As you can see, while Google’s share of the total search pie dropped,
since the number of searches in the pie itself grew, Google still showed a
gain. And what a gain — Google went over the 7 billion searches served
mark. Yahoo, at 2.4 billion searches, had its highest volume in the past
year. Microsoft, at just over 1 billion searches, didn’t break any past
records but at least got closer to territory it held a year ago.

For more, see related discussion on Techmeme
here and
here.