Get A Free Link From Wired

Some SEOs were saddened when Wikipedia added nofollows to external links. Perhaps they’ll perk up to discover that Wired’s semi-Wikipedia challenger has no such blocking. NOTE FROM DANNY: We’ve talked with Wired about the situation, and they are putting a robots.txt block on links coming out of the wiki so that links won’t pass credit. […]

Some SEOs were saddened when Wikipedia added nofollows to external links. Perhaps they’ll perk up to discover that Wired’s semi-Wikipedia challenger has no such blocking.

NOTE FROM DANNY: We’ve talked with Wired about the situation, and they are putting a robots.txt block on links coming out of the wiki so that links won’t pass credit. Also, our apologies to Wired in that we’ve ended up causing a run on the wiki with new pages being created. That was definitely not our intent — the headline of getting a free link, and the article itself, was more tongue-in-cheek about how the system was and might further get abused, rather than advice for people to really misuse the wiki for promotional purposes. I don’t agree with that type of abuse in general, and as someone who has had to deal with it in comments or submissions to our forums, it’s no fun. In hindsight, we probably should have just dropped a note pointing out the vulnerability. We’ve also asked that our test page be completely removed — it has served its purpose now. [Further note: Please see the fresh standalone post, An Apology To Wired & The Search Marketing Community].

Today, a page came up in response to a regular blog search I do, and I found it odd — just a link to an SEO firm. Was it an ad page that Wired was hosting?

After a closer look, I discovered the page was part of Wired’s How To section, which is basically just a wiki. As a new page, it — along with several others — is currently featured on the Wired How To homepage.

The links from these pages are not slapped with a nofollow attribute, and the pages themselves are very well indexed by Google. So, it’s no surprise that marketers might be looking to them as traffic drivers.

How can you get a link from Wired?

I created a sample page for Search Engine Land, which is a proof of concept. As you can see, I linked both Search Engine Land and my name, Barry Schwartz, to external sites, and those links seem to be able to pass link weight.

The syntax for adding external links in the Wired wiki works like this.

Search Engine Land is the anchor text in the example above, and https://searchengineland.com/ is the actual link.

Postscript: Seems like Wired is now calling our test entry spam and deleting it. Plus, Ross Mayfield, Wired’s Wiki Editor, is incorrectly saying that nofollow doesn’t “work” on wikis. Here is a screen capture: 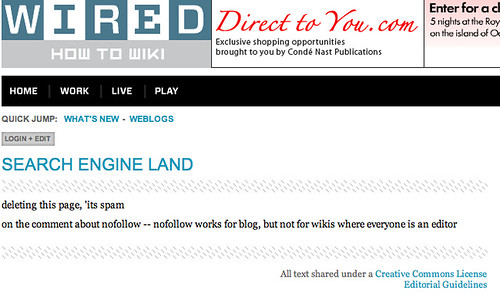 Postscript From Danny: I’m resisting the “Wired Calls Us Spammers” headline for a fresh post and instead have sent this message:

So earlier today, one of my editors came across a page at Wired How To that looked weird. Was it some paid ad sitting over there, pointing from a Wired domain, for an SEM company? We’ve seen these types of things at other reputable web sites.

We took a look, and it was the Wired How To wiki, as you’re familiar with. We made a test page to see if we could embed anchor text and if that anchor text would pass along link credit due to a lack of the use of the nofollow attribute. Indeed, it would.

All this was covered in our article, Get A Free Link From Wired.

Now we come to find that you’ve killed the test page and called it spam. It wasn’t, and it’s somewhat insulting that you’ve called it that rather that understanding it was a test of how your system works. That’s a much different thing from the real spam that clearly happens in your wiki and which, because you fail to use nofollow, was already a magnet for abuse.

You incorrectly say that nofollow is for blogs. Nofollow is an attribute that can be used by any type of system. Wikipedia put it in place in order to help stem some of the spamming that goes on there. That’s why we were somewhat amazed that the Wired wiki was wide open.

Nofollow won’t stop your wiki from being abused, but it will serve as a deterrent. You might consider it.