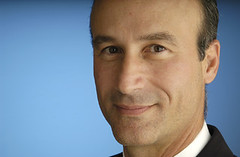 Google Finance Chief to Resign from the Wall Street Journal reports that Google CFO George Reyes has announced he is resigning from Google. A press release is also now up.

Reyes, who joined Google in 2002 and before its IPO, is only the second major Google executive to leave Google. Cindy McCaffrey, the former VP of corporate communications, left back at the end of 2004.

I’ve known and admired George since our days together at Sun. As Google’s CFO, George successfully navigated our innovative IPO, the regulatory demands of Sarbanes-Oxley, and the management challenges of scaling a global finance organization. Though we fully appreciate his decision to step back from active management, we’ll miss his thoughtfulness, good humor and wisdom.

Working at Google these past 5 and a half years has been an extraordinary ride. I’m honored and flattered to have been a part of this great management team. I know I’m leaving the company in good hands with a remarkable team of professionals that will continue to build on Google’s tremendous achievements.

George has been a full partner in Google’s global growth and development. He has done an excellent job in keeping us financially disciplined while protecting the best of our entrepreneurial culture.

Postscript From Danny: Aside from overseeing Google’s remarkable growth over the past few years, Reyes is also notable as the exec who caused a major PR nightmare for the company when he declared at the end of 2004 that click fraud might put search companies out of business. From a press account at the time:

“I think something has to be done about this really, really quickly, because I think, potentially, it threatens our business model,” Google Chief Financial Officer George Reyes said Wednesday.