Google Artificially Promotes Recent Web Pages from Google Operating System reports that Google has been recently showing a bit too much love to new or very recent pages indexed by Google. Ionut’s Alex Chitu’s example was that Google’s New Years logo promoted a search for January 1 tcp/ip, which then showed results for Digg and […]

Google Artificially Promotes Recent Web Pages from Google Operating System reports that Google has been recently showing a bit too much love to new or very recent pages indexed by Google. Ionut’s Alex Chitu’s example was that Google’s New Years logo promoted a search for January 1 tcp/ip, which then showed results for Digg and other new pages that had zero historical factors to be weighed on in the Google algorithm.

Here is a screen capture of the results for that query as of this morning: 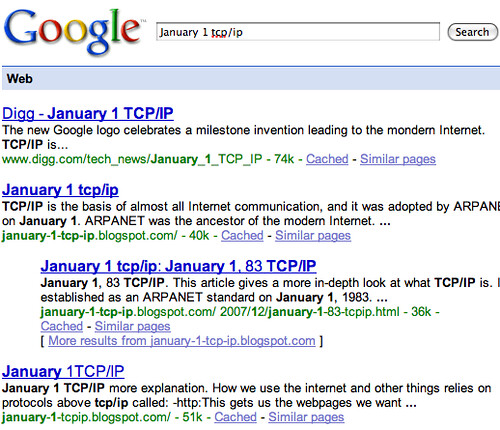 We all know Google has been getting really quick at indexing new pages, starting back in early August. But ranking those pages extremely well for queries is another story.

Did Google change their algorithm to artificially promote new web pages? Hard to say. We are waiting on a comment from Google, so come back soon for that. Since Google Operating System posted their story, several other blogs have chimed in:

BlogStorm has a good explanation of a theory he believes is the “real reason” behind this change. He discusses what Google calls the Query Deserves Freshness (QDF), which came from a New York Times article in June named Google Keeps Tweaking Its Search Engine. The QDF basically looks at the current search volume and then the blog post volume to determine if a subject is considered to be hot. If hot, then Google may promote new content to the top of the results. But if this is from June, why are we first really seeing this now? BlogStorm said because there was “no previous search history” for that query and that is why we now see tons of new results.

Is there something more to all of this? We believe so and hope to be able to get more information directly from Google for you on this. Stay tuned!