Greenpeace has issued a report warning of the ballooning energy needs of data centers feeding cloud computing. It is intended to encourage cloud providers to choose cleaner energy sources, and it does not beat up overly on Google, Amazon, Salesforce, MicroSoft, Facebook, and Yahoo!. But, it is a mixed report card, may indicate an important trend.

Greenpeace has issued a report warning of the ballooning energy needs of data centers feeding cloud computing. It is intended to encourage cloud providers to choose cleaner energy sources, so it does not beat up overly on Google, Amazon, Salesforce, MicroSoft, Facebook, and Yahoo!. But, it is a mixed report card, may indicate an important trend.

If you use a laptop, chances are you’ve already realized that fast, small computers tend to run hot. This may change as more efficient technologies are developed such as quantuum computers, but currently computers require considerable cooling to keep from overheating. Hobbyists tinkering in their garages play with “overclocking” their computers by doing things like circulating liquid nitrogen through them so that they can safely speed up the processors.

Large data centers, with their ranks of racks upon racks of servers, must typically use more traditional methods for keeping the computers cool and functioning optimally. Racks must be constructed to allow for air fans and conduits for air circulating. Ducts must connect up to distribute from giant air cooling units – huge enterprise-sized air conditioners which use cold water towers and compressors.

Naturally, servers and computers also use electricity for operating their processors, monitor screens, network switches, etc. But, most laymen are unaware of the air cooling needs which comprise a significant component of data center power usage.

Greenpeace is aware of the data center power usage needs, as their report and news statements outline. Greenpeace’s headquarters are in the Netherlands, and Europe in general is perhaps more aware of the energy usage implications of data centers. For instance, the European Union has been developing guidelines, recommendations, and a code of conduct for data center operators which highlights the importance of energy conservation.

Since data centers use large volumes of energy, constructing them efficiently can reduce energy needs. For instance, using water from nearby cool lakes or building in cooler climates can help. Also, the energy sources can make a large difference – if a data center uses energy from coal plants it then contributes to carbon dioxide emissions and global warming. 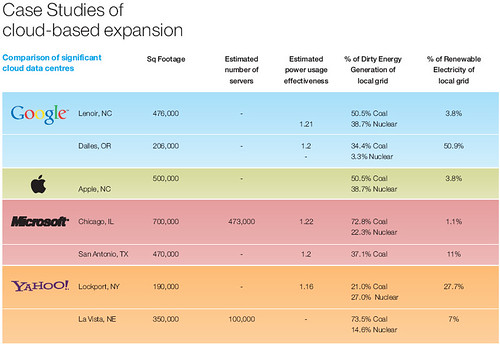 In press statements, Greenpeace highlights one Yahoo! data center as an example of a responsible construction choice – Yahoo! has planned to build in Buffalo, New York, where they will be supplied by a utility that derives most of its electricity from hydroelectric.

Yet, the report card shows a couple of Yahoo!’s other data centers which are supplied by large percentages of coal and nuclear power.

The company that Greenpeace specifically beats up in the publicity is Facebook. Greenpeace highlights how Facebook has chosen to build a new data center in Oregon, with energy supplied by PacificCorp, which uses primarily coal-burning plants.

Google and other search engines have energy efficiency and conservation initiatives in place (see Going Green at Google, Microsoft Environment, Yahoo! for Good: Going Green). But, these efforts may not go far enough to satisfy environmental groups, considering the large issues involved in building cleaner data centers. It’s a difficult issue, considering these companies need to keep costs low while providing service, and energy efficiency often comes with heftier price tags or upfront costs. There are companies such as Digital Realty Trust, which specialize in constructing energy-efficient data centers on behalf of large corporations such as the search engines and social media giants.

Ultimately, these companies will likely not push for greener data centers without lower costs or greater consumer demand and other incentives such as government requirements or underwriting.

The Greenpeace report will likely go unnoticed by many consumers in the U.S., but it could be the opening salvo in increased criticism from environmental groups. If consumers were to begin selecting online services based upon environmental report cards more, the companies may make more dramatic adjustments to stay competitive. There are a number of different sites and articles promoting green alternative search engines such as this, and this.