Hey Firefox – Let Us Pick Our Own Search Engine!

So Firefox 3 has a new release candidate making news, suggesting that the browser is nearly done. May I suggest that the browser is nowhere near being done until the Mozilla Foundation drops its favoritism to Google and allow users to pick their own default search engine? And that Microsoft ought to be among those […] 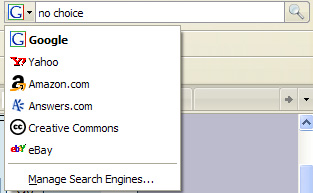 So Firefox 3
has a
new release candidate
making news, suggesting that the browser is nearly done. May I suggest that
the browser is nowhere near being done until the Mozilla Foundation drops its
favoritism to Google and allow users to pick their own default search engine?
And that Microsoft ought to be among those choices?

Seriously, the entire Firefox+Google love fest is a joke. Let’s revisit a
little history here. Google
fought and fought to
pressure Microsoft so that no search provider was the default in Internet
Explorer 7, arguing this was the best for consumer choice:

"The market favors open choice for search, and companies should compete for
users based on the quality of their search services," said Marissa Mayer, the
vice president for search products at Google. "We don’t think it’s right for
Microsoft to just set the default to MSN. We believe users should choose."

Google got what it wanted. Internet Explorer has no default search engine. If
you upgraded to it, IE used whatever search choice was already established on
your computer. If you did a fresh install of XP or Vista, then you had to choose
your search provider. The choice was only made for you in cases where the
computer maker itself cut a deal (see these
here).

If Google’s all for choice,
as I’ve said before,
then Google should be pressuring Firefox to ensure there’s consumer choice in
that browser, as well.

Instead, Google’s been quite happy to buy out the idea of consumer choice. As
the New York Times

pointed out toward the end of last year, 85 percent of Mozilla’s revenue
comes from Google. In return for that, Google’s what you get as your search
provider for most versions of Firefox.

Let’s talk specifics. If you download a fresh copy of Firefox, by default it
will be Google search that you’ll use if you search using Firefox’s built-in
search box. Using a drop-down option (as shown in the screenshot at the top of
this article), you can then access these resources:

It makes sense for Google to be among the options. It’s the world’s most
popular search engine, well used and well respected. Similarly, Yahoo is an
excellent Google alternative that should be included. And similarly, Microsoft
Live Search is an excellent alternative — but it doesn’t make the list.

Why not? Again, Google has the deal to be the default search provider in most
markets where Firefox is distributed, except for in some Asian markets, where
Yahoo has a
similar deal. It’s not clear if such deals also prevent Microsoft from being
listed at all or if this happens because of the Firefox-Internet Explorer
rivalry.

I don’t care in either case — Microsoft is a good search engine that
searchers should have access to directly from that search bar. By not offering
it, Firefox is failing its users out of either financial reasons or spite.

Yes, there’s an option to add other search engines. At the end of the
drop-down box, there’s a Manage Search Engines choice that eventually leads you
to

this page. There, you can find Live Search among the other 23 choices. But
as there aren’t that many choices, why not add them all to the search box? Firefox could
learn a lesson here from Groowe. My long-time
browsing companion, it lets me search from any of the major search engines or
specialty search engines, with them easily grouped into categories.

Let’s go back to those other search choices. If you can’t include them all,
why not list the more popular ones? Do that many people do Creative Commons
searches that it needs to be right in the search box itself? And is Amazon there
only because Firefox probably earns off of affiliate searches? Is that the same
for eBay? If you go by

I submit that search is an important part of the browser development process
that shouldn’t be left as a choice made based on how much money Mozilla can
earn. It should be done in a way that best benefits the user. That means:

Fix it, Firefox. And Google, help them fix it by ensuring that any provisions
of the secret contract between you and Firefox are altered to allow for the
consumer choice you’re so happy to espouse should happen in Internet Explorer.