Just in from Hitwise, the first month-to-month figures since the launch of Bing. And the figures show Bing has both gained and dropped in the same month. Confusing? Yes it is!

Here are the month-to-month figures, percentage of searches each search engine handled in the United States:

Despite this, Hitwise put out its emailed release saying “Bing Growing at 25 Percent Rate in June 2009.” How’s that work? Let’s go to the second chart, week-by-week growth in May: 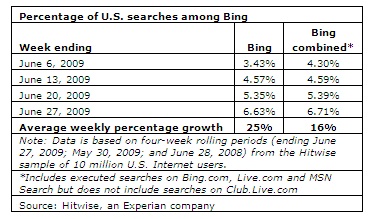 Meanwhile, over at Mashable, there’s been plenty of buzz over the fact that Bing is “now” bigger than Digg, Twitter or CNN. That lacks the proper perspective. Look at this chart:

That shows Live.com having more traffic than two of those players (and yes, it also has more than CNN, too). Live.com was Bing. IE, “Bing” has always been bigger than those other players, it seems.