Is Twitter a search engine or not? There’s been plenty of discussion and debate about this recently. I’d say yes, in a way. It’s clear to anyone who watches a twitterstream that people put out questions to Twitter similar to how they use search engines. But if anecdotal examples aren’t enough, a survey I conducted […]

Is Twitter a search engine or not? There’s been plenty of discussion and debate about this recently. I’d say yes, in a way. It’s clear to anyone who watches a twitterstream that people put out questions to Twitter similar to how they use search engines. But if anecdotal examples aren’t enough, a survey I conducted last week confirms that Twitter is used as a search resource.

If you’re scratching your head about the phrase “help engine” in the headline, my companion piece, The Rise Of Help Engines: Twitter & Aardvark, goes into more depth about the new class of search engines I’m calling help engines and why.

Before diving into the survey numbers, let me start out with one of the comments I received about the survey, which ran for several days:

You don’t want to get me going about the number of “scientific” polls I’ve read over the years that are nonetheless meaningless for a variety of reasons. I’ll save the longer debate of the “science” behind many polls for another time. But the comment deserves some attention.

My poll cannot tell you what everyone does on Twitter with any certainty, in terms of search. Moreover, I’m not certain how anyone could get a “random” sample to produce such a poll. Those with many followers are not the same as those with a few. Do you calculate the percentage of highly followed users and ensure they answer in the same proportion as those who take a survey? And how do you “random dial” these people? What percentage of people are Twitter novices versus those with experience, which might also influence any answers about how they use Twitter for search?

No, this survey doesn’t provide a perfect picture of how people search via Twitter. But I think it’s a good first step beyond the anecdotes that people report. It provides a few preliminary hard numbers to put behind all that commentary about Twitter as search.

It’s also important to understand this survey is NOT about Twitter Search. That’s a separate part of Twitter, where people can explicitly do a search against past tweets to find information. Instead, this survey was about how people use Twitter itself — their network of followers — to ask for help directly, especially when in the past, they might have first turned to a search engine.

Finally, when I write that Twitter is a search engine, or being used by some who see it that way, I think it’s important to understand that I don’t mean this is Twitter’s primary purpose — nor that Twitter as a micro-blogging service sees itself as a search engine. I simply think this is a by-product of the service.

Let’s dive in (in a hurry? Scroll to the end, and there’s a summary). The first question asked:

How often do you ask a question on Twitter in hopes of getting an answer?

Of 467 responses, the breakdown was: 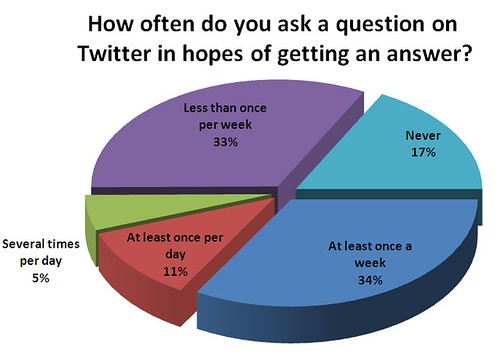 Less than 20% (17.3% exactly) said they’ve never used Twitter to ask a question. For this group, clearly Twitter is not a search engine. Another third (32.8%) said they use it less than once per week, so it doesn’t seem to factor heavily with them as a search alternative.

For the other half that answered this question, Twitter is among the search tools they consider, with varying frequency:

The second question asked about how successful people were when they turned to Twitter for answers:

How often do you get satisfactory answers to your questions?

There were 386 responses to this (another 81 selected N/A, as they didn’t use Twitter for searching). Satisfaction was mixed, more favorable than negative: 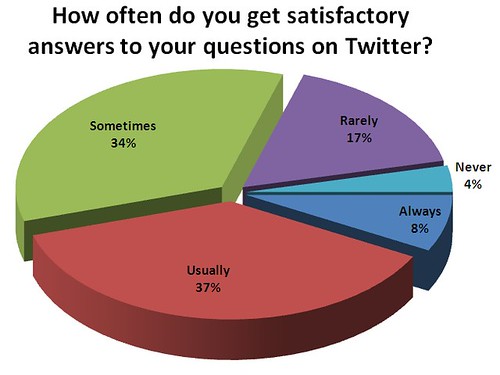 As you can see, those dissatisfied — rarely (16.6%) or never (3.6%) getting answers — made a combined response of 20%. That was far outweighed by those who were satisfied in some way, a combined figure of 80%, which broke down into:

Even among those who are satisfied in some ways, you can see that Twitter is not perfect, given the low percentage of “always” answers. However, various surveys I’ve reviewed of “regular” search engines over the years never have high figures of those who are “always” satisfied, either.

If Twitter is a search engine, how much of a threat is it to the existing ones out there like Google? The third question was a stab at determining some frequency of using Twitter rather than the traditional ones:

How frequently do you turn to Twitter for answers where in the past, you would have used a search engine like Google, Yahoo, Microsoft? 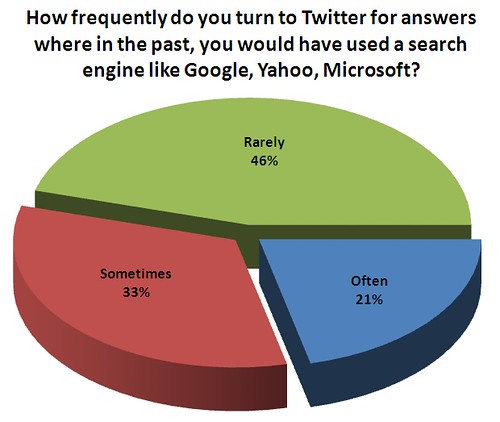 There were 390 responses (another 77 selected the N/A option). So of those who say they’ve used Twitter rather than a traditional service, nearly half (45.6%) said this was a rare choice. Add to that another third (33.1%) who said using Twitter was a “sometimes” choice, and I don’t think the folks at Google (much less Yahoo or Microsoft) have to worry about widespread abandonment.

Indeed, the fourth question pondered if people could give up their favorite “real” search engine in place of Twitter:

Could you give up using search engines in place of asking questions on Twitter?

There were 405 responses (with another 55 selecting N/A): 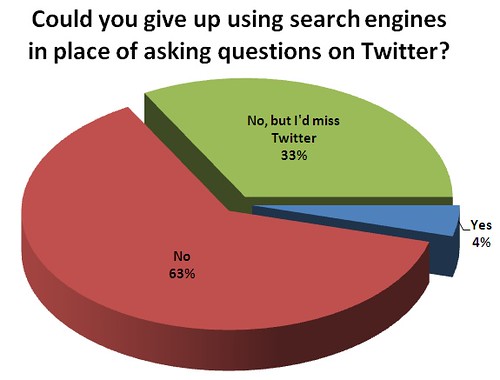 I also liked this comment from one person about this question on giving up traditional search engines:

I did know this. I would have been very surprised if the results went the other way. But as the Twitter hype continues to ramp up, I thought it would be useful to throw in this type of reality check question.

So far, the questions revealed that Twitter was used as an alternative to search engines, rather than a replacement. So what types of questions were being asked?

Personally, I had my own thoughts based on my own habits. Shopping recently, I twitted out that I wanted some advice about which external hard drive might be best. While I could use my iPhone to do regular searching while on the move, I knew from past experience it would be faster and easier to see what opinions came back.

I wrote up this as an option, along with some other categories that came to mind:

I also allowed the poll to let people add their own reasons that I might not have thought of. After getting about 70 responses, I quickly realized there were some additional categories that needed to be added:

Since these other categories were added later, they might be undercounted. But still, you can see how some of the later categories still drew plenty of responses to get them among the top choices.

People were allowed to pick more than one answer, which is why the percentages will not add up to 100% overall. There were 467 people who took the survey overall, and 78 specifically selected N/A for this question — meaning the percentages are based on 389 people who did use Twitter to ask questions for one or more of the specific reasons below:

“Trust” was by far the top reason, with nearly half of those selecting it. Closely related was the number two reason, to get “expert answers.”

As I cover in my The Rise Of Help Engines: Twitter & Aardvark article, this is something unique that Twitter brings to the search space. General search engines simply don’t allow you to ask questions of friends en masse, something that was a top search habit until search engines came along. Twitter uniquely does allow this.

The real time component is interesting, too. One of the key areas where Twitter Search itself has gained attention is how people turn to it for news. But clearly, some aren’t even bothering to check their first. They’re asking others directly — which has the side-benefit to help track for others.

Note that being lazy is the last reason that people search. Folks turning to Twitter do seem to be doing it for very specific reasons rather than not having time to use Google or another search engine. Indeed, that was the focus of the next question:

Do you turn to Twitter first to get questions answered or search engines?

There were 403 responses (with another 64 selecting the N/A option): 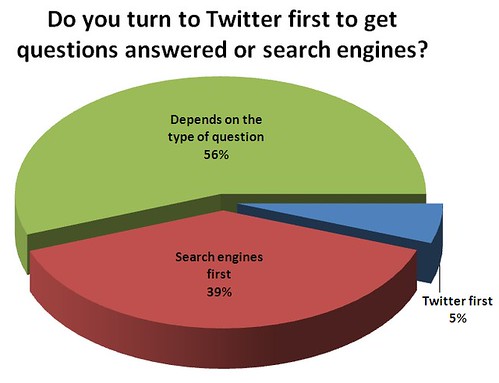 If you’re using Twitter to ask questions that could easily be solved by Googling it, you’re a dick and you’re doing it wrong and I won’t be following you. I have no patience for morons.

Finally, I asked at the end:

What types of questions do you ask?

Similar to my question on why people turn to Twitter, I put out some initial categories (Shopping, Computer, Travel, Legal, Home, Trivia) and then quickly added a few more after I saw some of the open-ended “Other” suggestions that came in.

People were allowed to pick more than one answer, which is again why the percentages will not add up to 100% overall for this question. There were 467 people who took the survey overall, and 78 again specifically selected N/A for this question — meaning the percentage are based on 389 people who did use Twitter to ask questions for one or more of the specific categories below:

There weren’t many surprises for me here. I figured many computer or internet related questions should have been asked. And, newsflash, people ask each other on Twitter a lot of questions about Twitter.

In the end, I also allowed people to leave opened ended comments, which I found fascinating.

It’s All About Your Followers

One common theme was that Twitter was only useful for answers depending on the number of followers you have, plus the quality or trust you have in them:

And It’s About Your Friends

Traditional search engines might provide you with a variety of sources, but they’re really not overtly aiming to give a variety of opinions. That’s something some Twitter searchers value:

A number of people commented on Twitter hype growing:

Made it to the end? Here’s a summary of the findings: