I Believe In The Google -60 Penalty

Whenever people say there’s a new Google penalty, often there’s not confirmation from Google that such a thing exists and even other webmasters may disagree that the penalty does exist. But with the -60 penalty that’s going on, there are more clues that make me think this is indeed real. First, let me start by […]

Whenever people say there’s a new Google penalty, often there’s not confirmation from Google that such a thing exists and even other webmasters may disagree that the penalty does exist. But with the -60 penalty that’s going on, there are more clues that make me think this is indeed real.

First, let me start by explaining that I believe the minus 60 penalty isn’t an exact 60 spot rank reduction. I believe it comes in various forms, from -6, -30, -60, -150, -950, and variations in between. Overall, I think what causes such a Google penalty is a trust factor. If Google loses trust in your site, on some level, you might be hit with such a penalty.

Today at the Search Engine Roundtable, I wrote Google Basically Admits to Minus 60 Penalty. I linked to a Google Groups thread where John from the Google Webmaster Trends team replied to a thread discussing why one webmaster noticed sitelinks at position 60 for his site. Instead of John explaining why the sitelinks would be at the 60th position (it is normally only found for sites when they show in position 1), John asks the webmaster to look at the discussion around the -60 penalty. Furthermore, John points out specific issues with the site including bad links pointing to the site, hidden links pointing outwards, and hidden footer content.

Let me show you what I see for the site right now. A search on vacation realty, but starting at position 64, returns these Sitelinks. 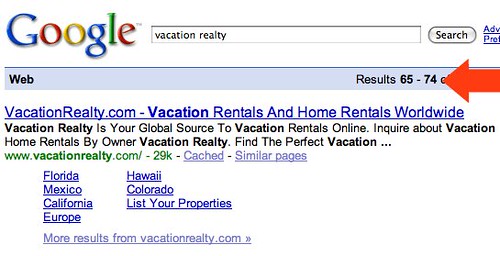 Yes, the Sitelinks are showing for the site in the 64th position. This might imply that the search “vacation realty” should return this specific site as a number one listing. But something, some penalty, may have pushed it to the 64th position. This is the specific issue that John did not directly reply to; instead, he told the webmaster to look into a thread that discusses the -60 penalty. Then John replies that he still has trust issues with his site.

Remember Google’s Position Six Penalty (Or Bug)? Well, that turned out to be a bug. In that case, Google never admitted it was a penalty, and it turned out to be some type of bug. So this case seems very different and offers me more of a reason to believe in the -60 penalty.